But then there are those days when the 42-year-old import just shows off what he’s got and Sunday was one of those days. The husband of Spice Girls vet Victoria Beckham put on quite the show as he splashed around with his four children on the shores of Malibu.

The soccer star seemed to spend the most time with his little girl Harper, aged six, who looked darling in a pink flamingo print swimsuit.

A good day with his little one: David Beckham carried his daughter Harper on the beach in Malibu on Sunday 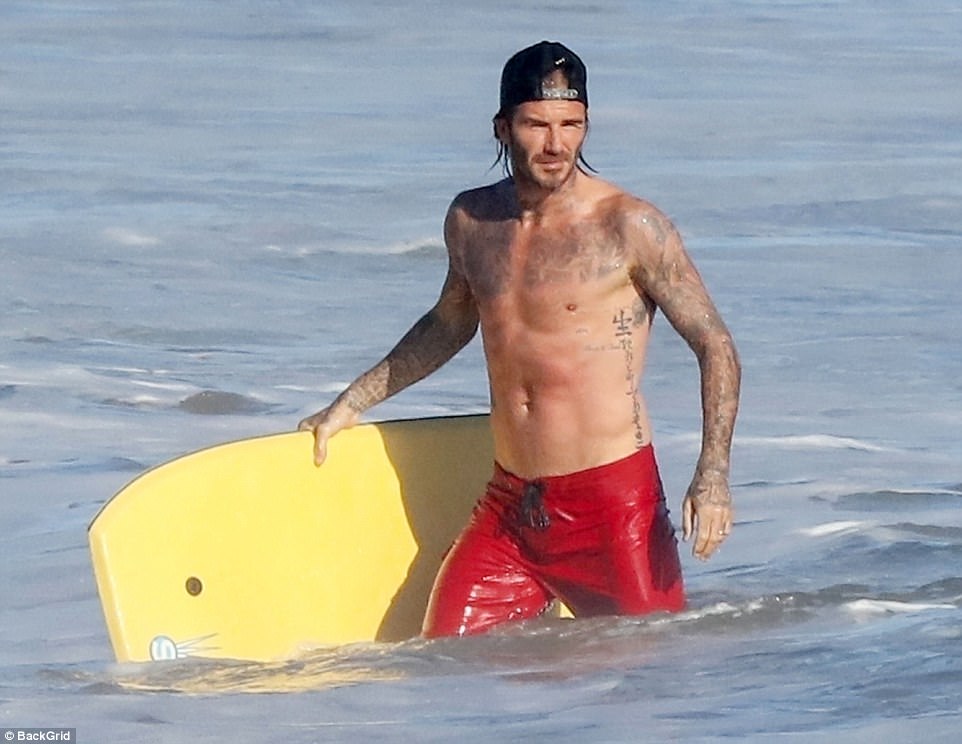 A lot to look at: The soccer star showed off plenty of his tattoos

The child had the time of her life as she skipped along the shore.

Harper also was seen being carried by daddy as he took her slowly into the chilly Pacific Ocean.

His stunning wife Victoria, who used to go by Posh but now prefers Victoria as she has evolved into a fashion designer, was not photographed.

On social media David shared photos of himself and his kids. In one shot, he put a heart around his little girl Harper, making it clear she was very special to him. 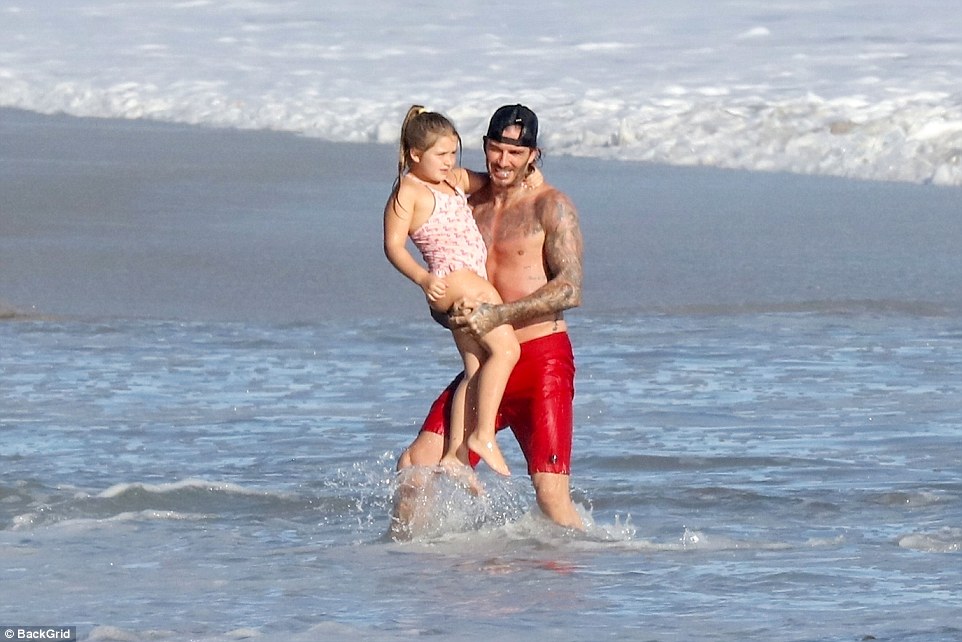 Number one: The soccer star seemed to spend the most time with Harper, who looked darling in a pink flamingo print swimsuit 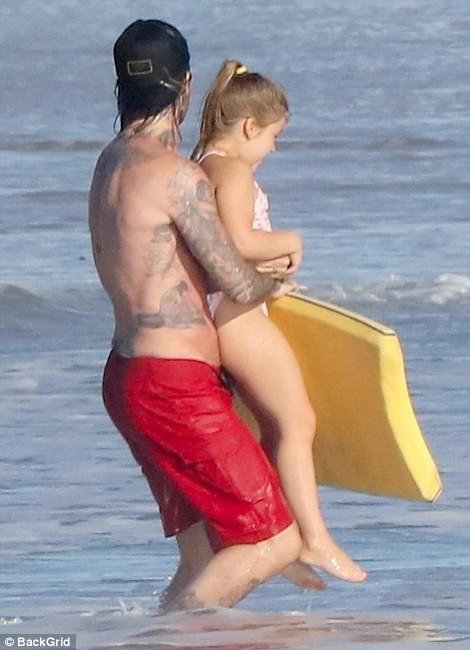 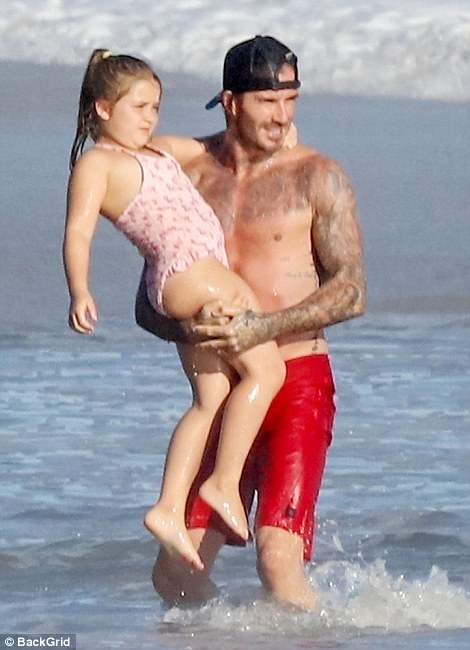 Good daddy: Beckham carried Harper into the water and at one point also had a Boogie Board with him 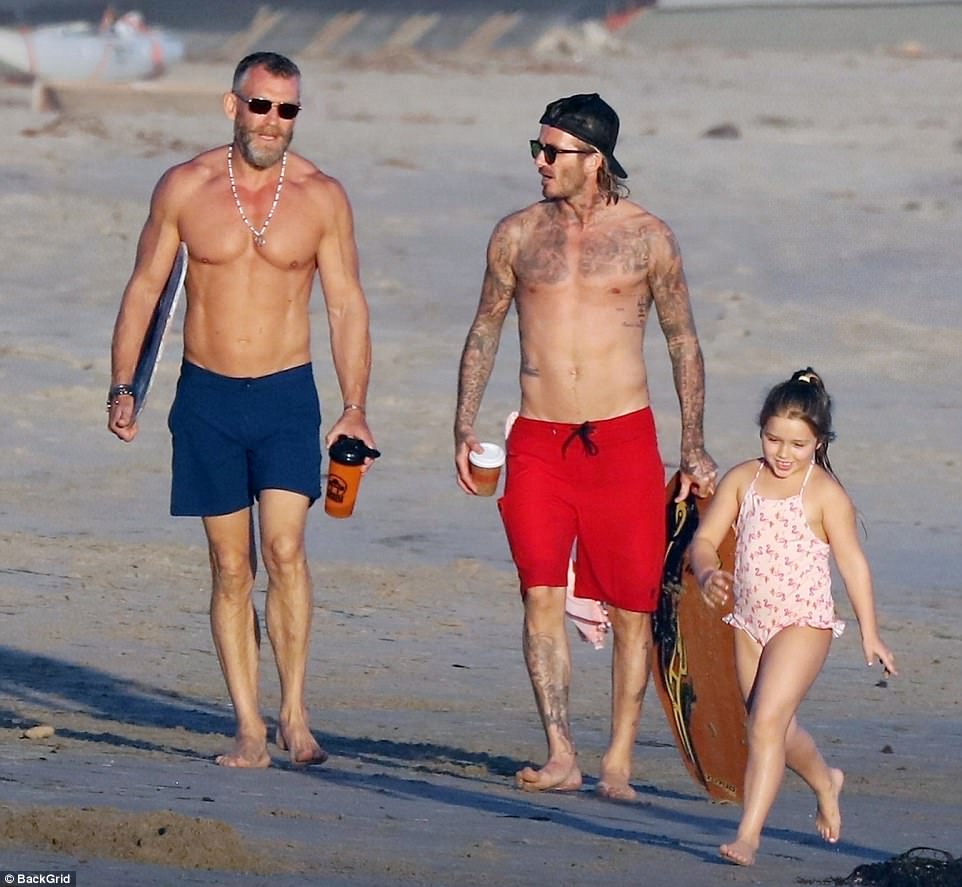 A pal: He was also seen with a male friend who had silver fox locks and a beaded necklace 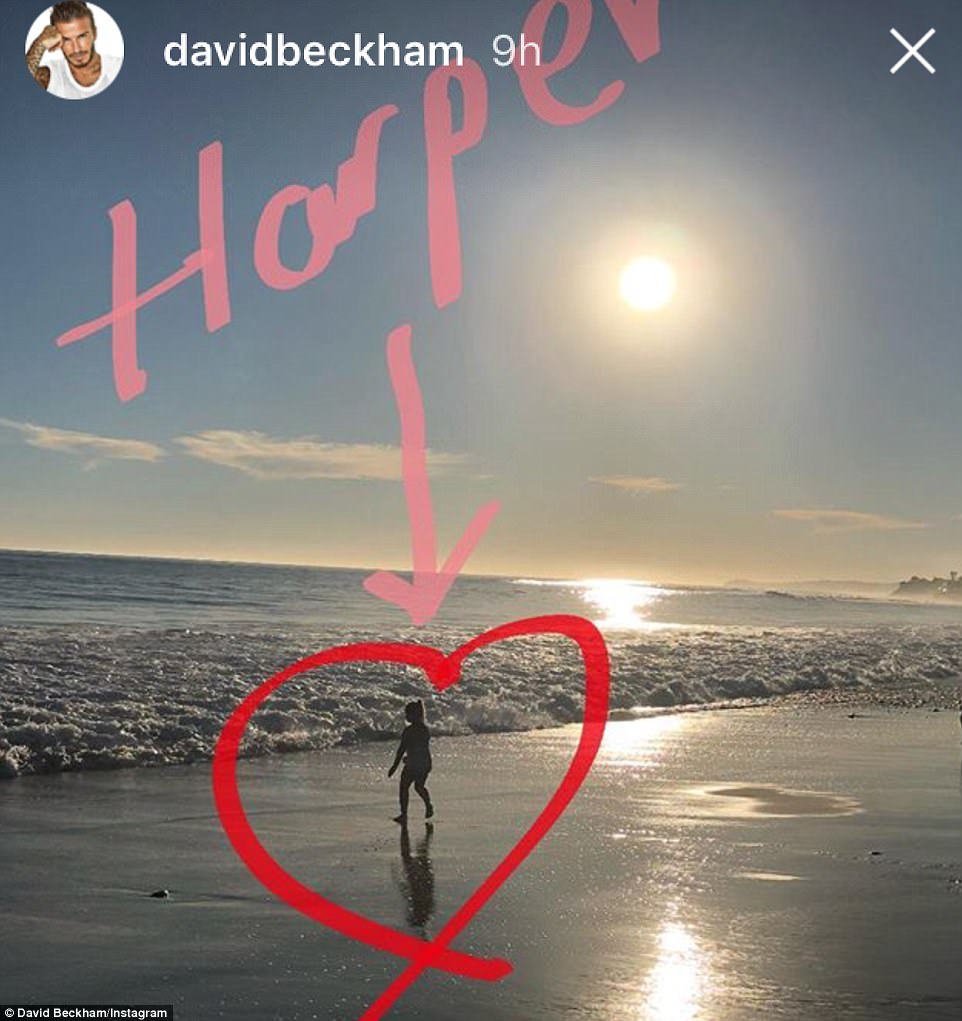 His heart: The athlete also shared this photo to Snapchat where he put a red heart around his little girl

The athlete looked to be in excellent spirits as he modeled red long swim trunks with a black drawstring making him look like a modern-day Baywatch star.

David also had on a matching black baseball cap worn backwards over his lock highlighted locks.

At one point he grabbed a yellow Boogie Board and played around with it in the small waves. 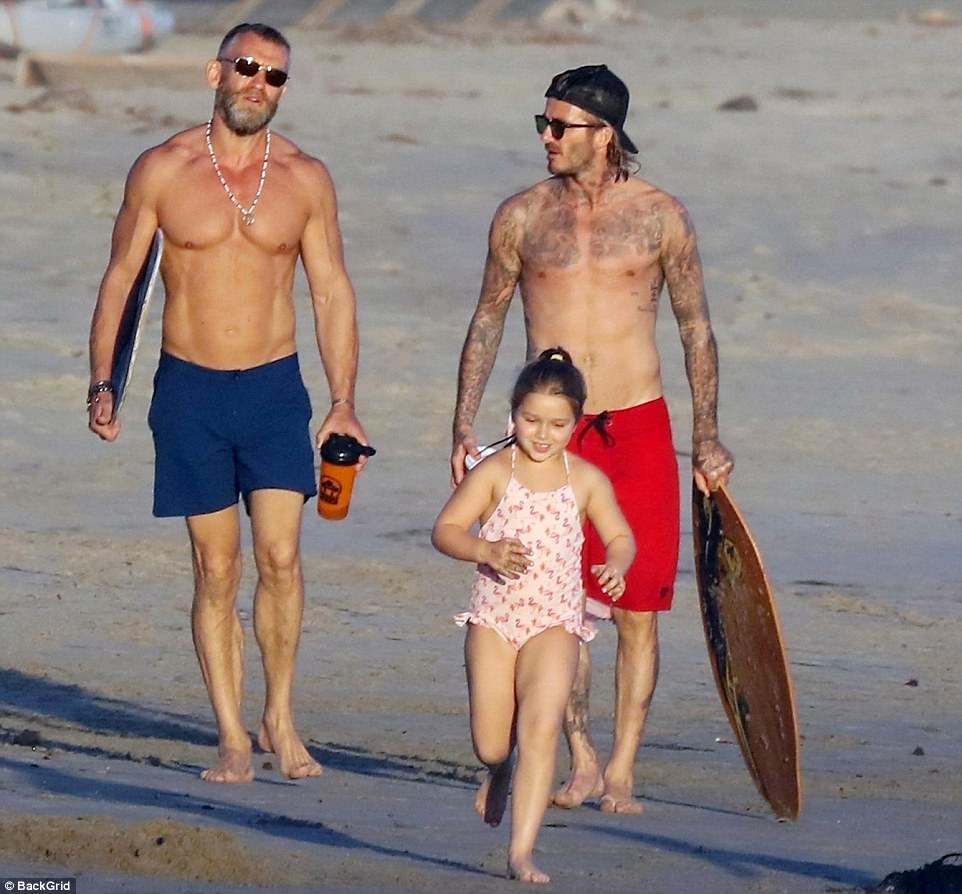 She is a sporty one: Harper smiled as she ran down the beach ahead of her famous father 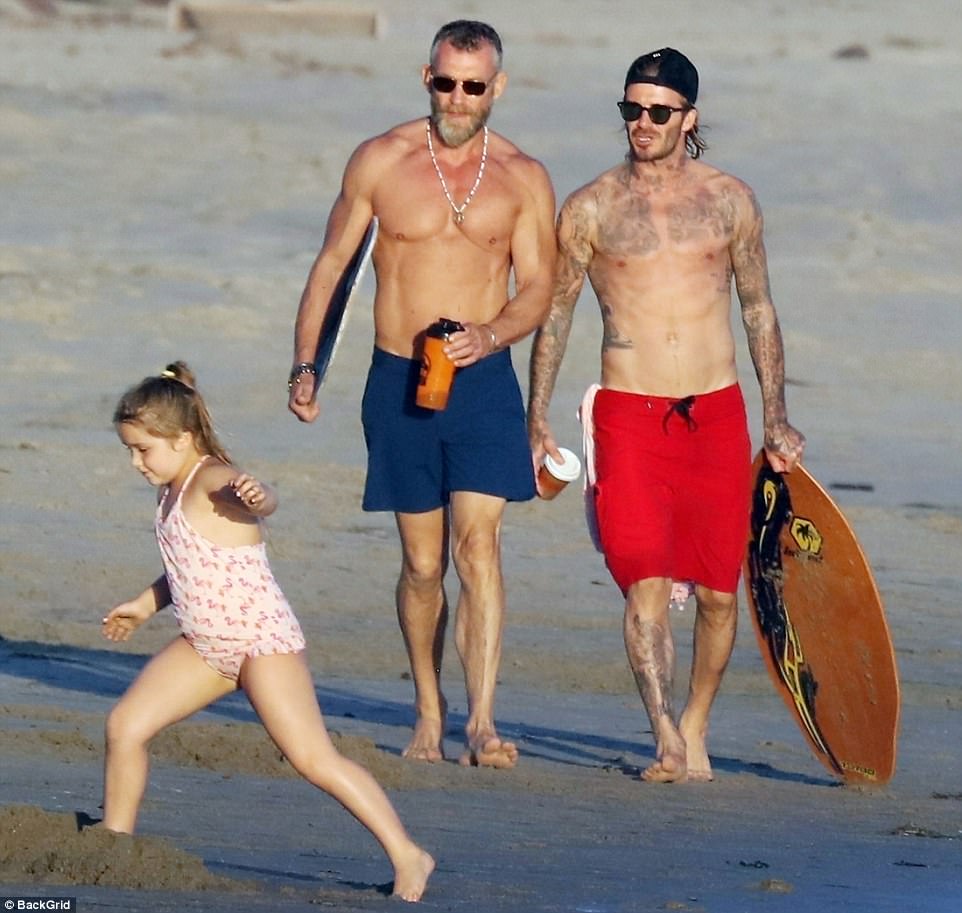 Going off on her own: Harper displayed a rebellious streak as she darted off to the side while her dad carried his coffee 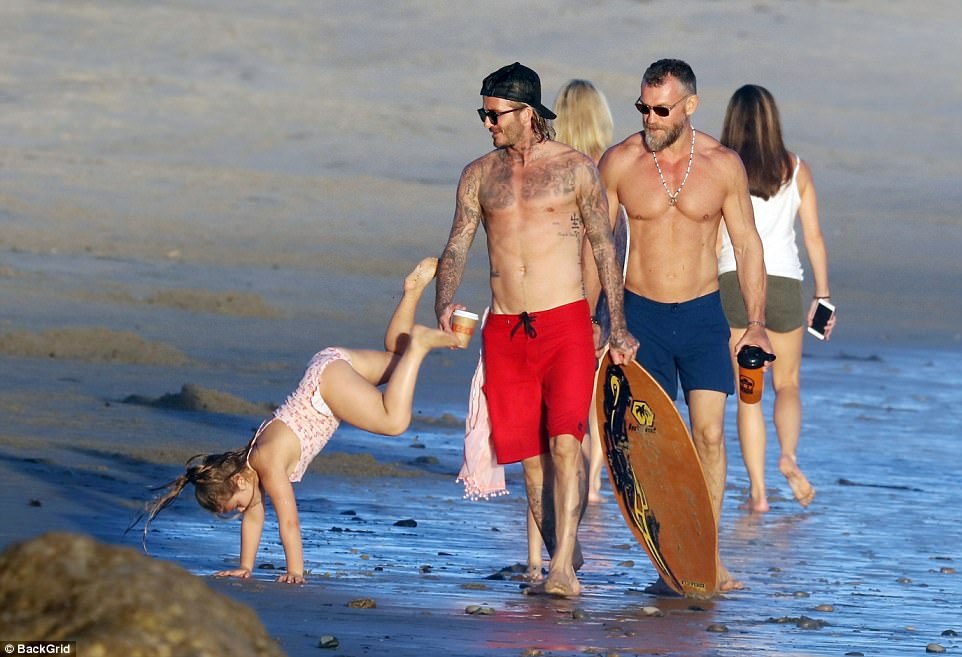 Handstand? Harper tried to kick up her heels as she rested on her hands; dad found this amusing

The London native was also seen using a volleyball as a soccer ball as he kicked it around large heaps of seaweed to play a quick game with his three boys.

There were plenty of bikini-clad female admirers that walked by the soccer legend, causing their heads to turn.

Also present was a male pal who had silver fox locks and seemed to be in very good shape as well. He wore sunglasses and a beaded necklace. And the man carried a drink in an orange plastic bottle.

Some of David’s 40 tattoos were also on display as he enjoyed his festive beach day. 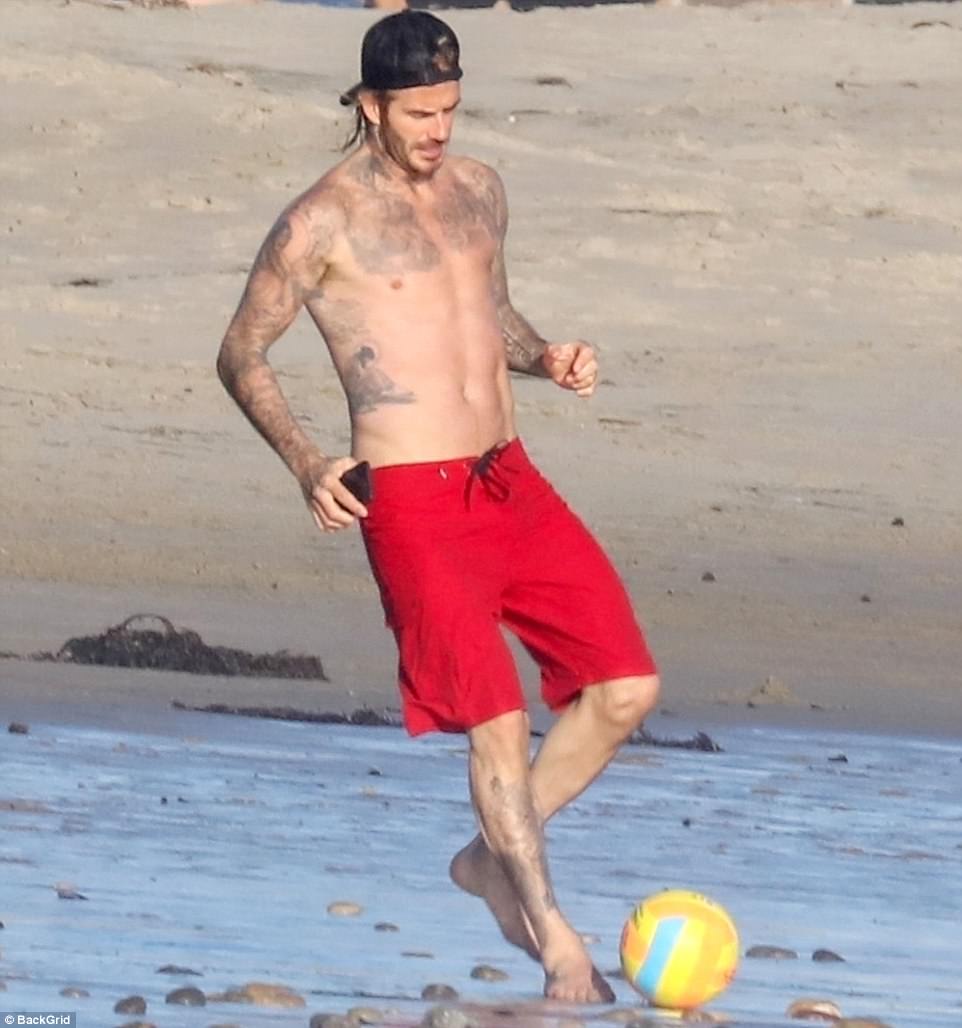 Head’s up: The London native was also seen using a volleyball as a soccer ball as he kicked it around large heaps of seaweed to play a quick game with his three boys 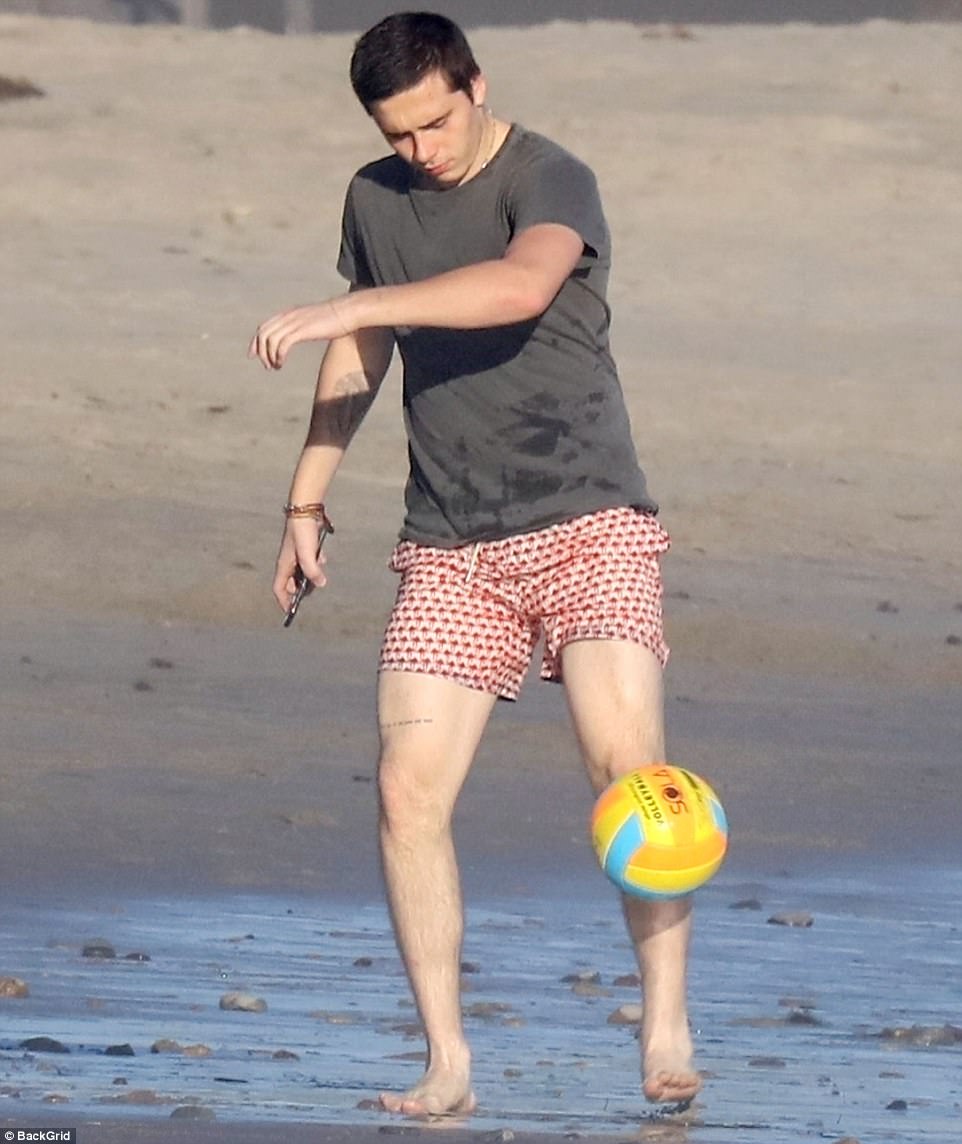 His boy: His son Brooklyn wore a grey shirt and red and white trunks and held on to his cell phone 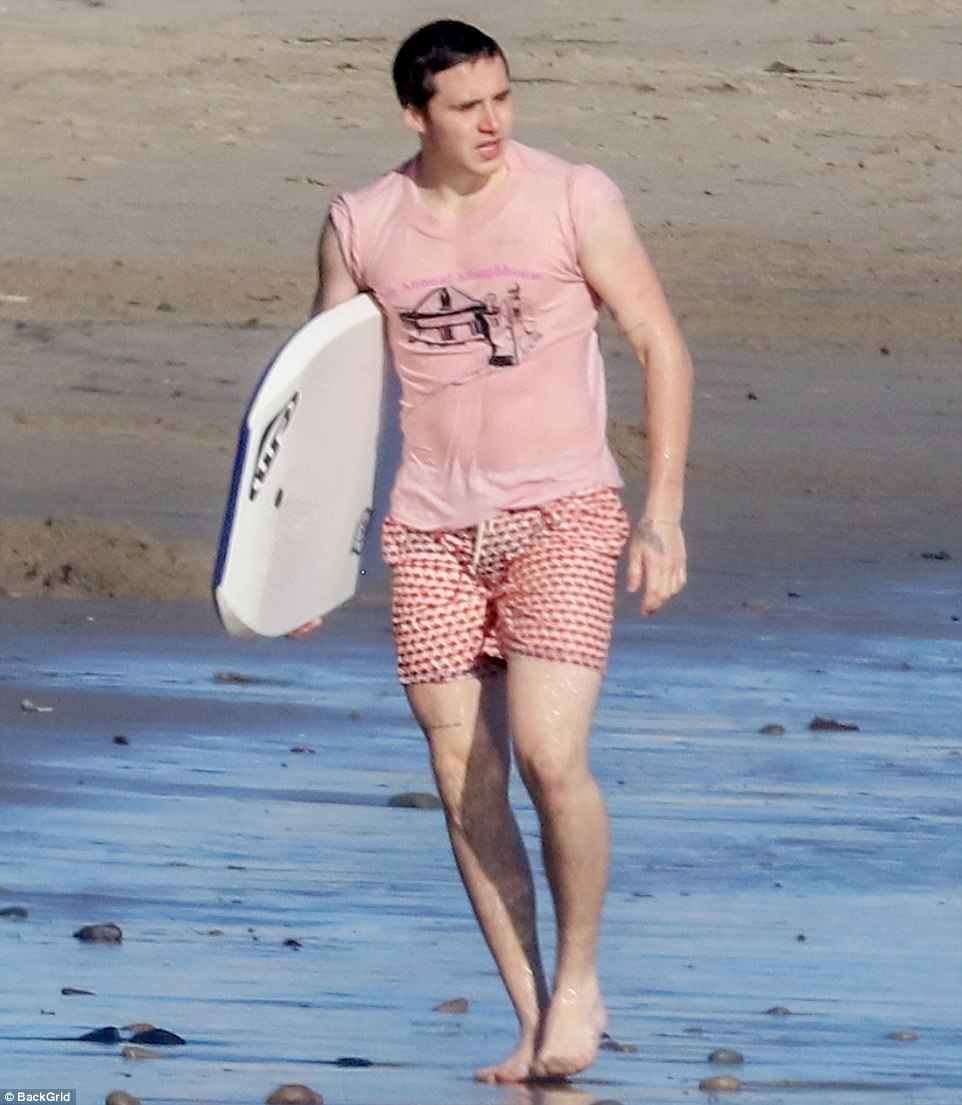 Another look: Later the teen added a pink T-shirt; he has been studying in London 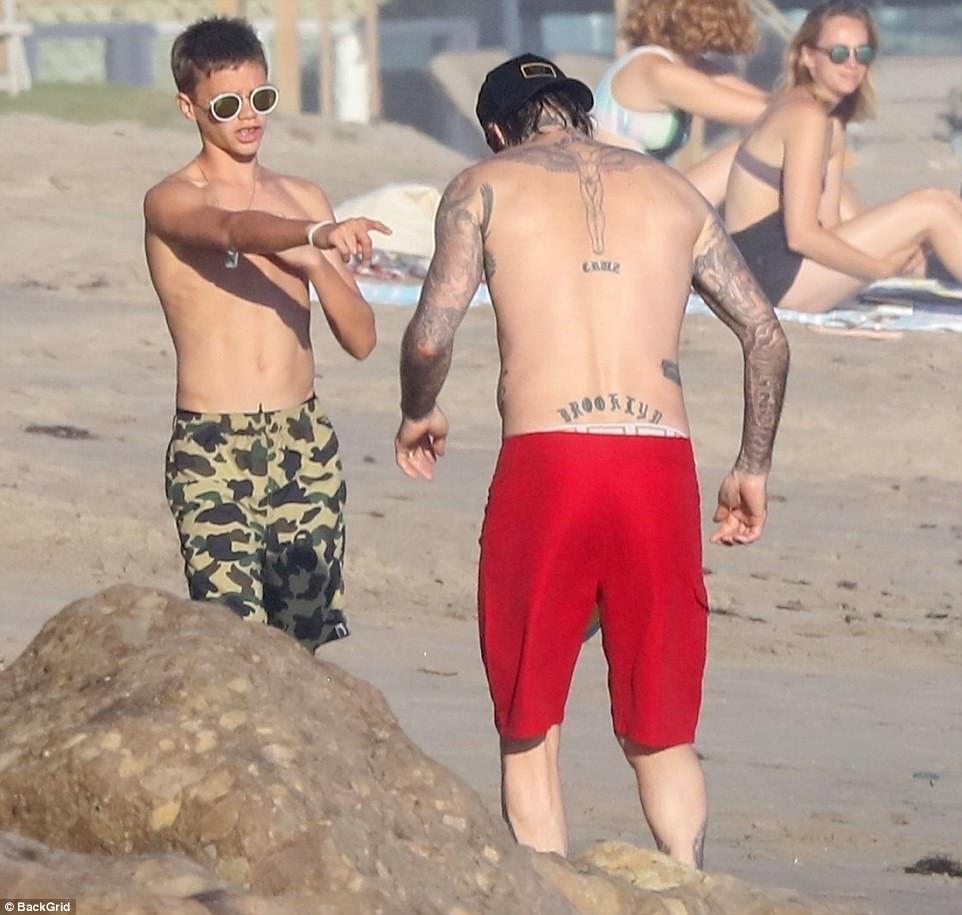 Cruzin: David is here seen with his son Romeo who had on camo shorts

Speaking about how he chooses his designs, the iconic star has explained: ‘They’re about the important people in my life, who I want to have with me always.’

For his children, all four kids have their name inked on David’s body, while he has cherubs to represent his three sons and ‘Pretty Lady’ for his only daughter.

‘Mine are all about the people in my life, my wife and sons, who I want with me always,’David has previously said.

‘When you see me, you see the tattoos. You see an expression of how I feel about Victoria and the boys. They’re part of me.’

Despite now being in his forties, David appears to have no desire to put an end to his permanent, and expensive, hobby.

The father-of-four has previously revealed that he has no regrets about any of his inkings, saying: ‘I don’t regret any of them. They all have a meaning. I think that’s what’s important about tattoos, if they have a meaning you’ll never regret them.’ 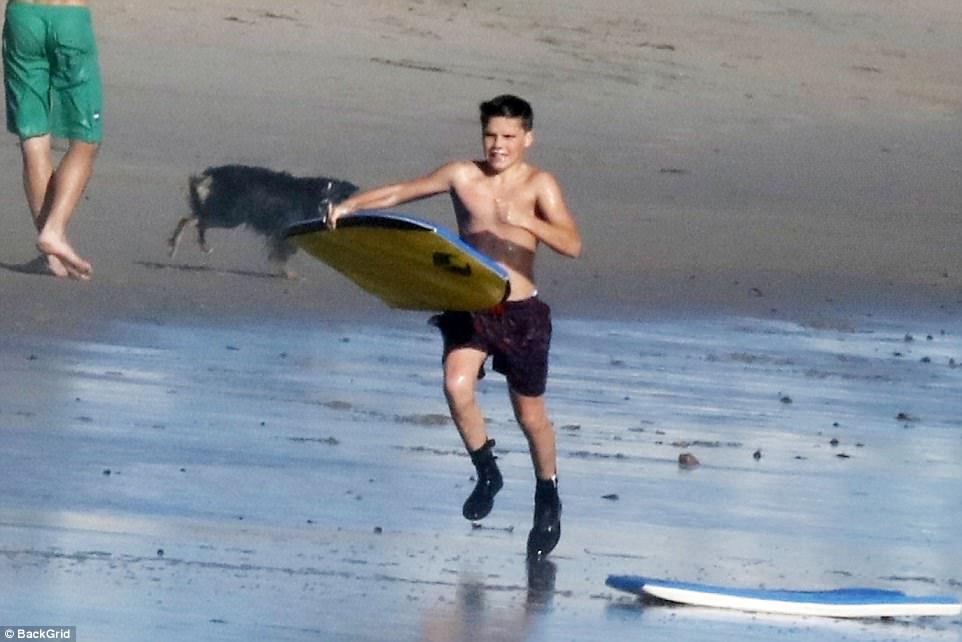 He liked the BB: Cruz is seen with dark shorts on and matching booties as he emerged from the surf 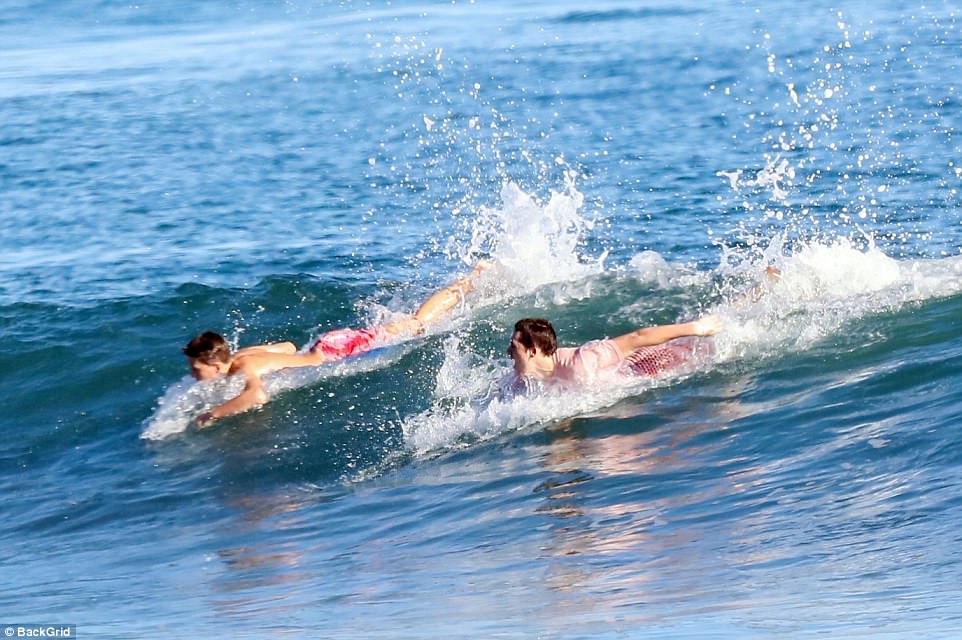 Boys will be boys: Here Brooklyn is seen riding a small wave as he screamed out to a pal

Also on Sunday the family was seen getting lunch in Los Angeles.

After a visit to Jon And Vinny’s restaurant, Harper was seen beaming and skipping out towards the car ahead of her brothers.

Dad David went for an uber casual look as they followed them to their vehicle, wearing a black baseball cap, T-shirt and jeans. 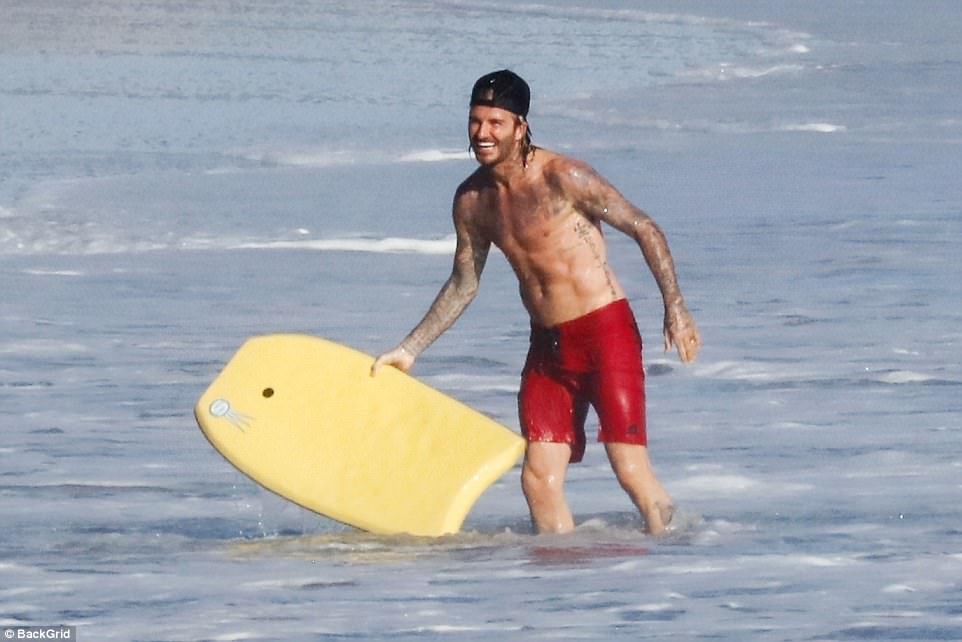 More to check out: ‘When you see me, you see the tattoos. You see an expression of how I feel about Victoria and the boys. They’re part of me,’ David has said of his ink 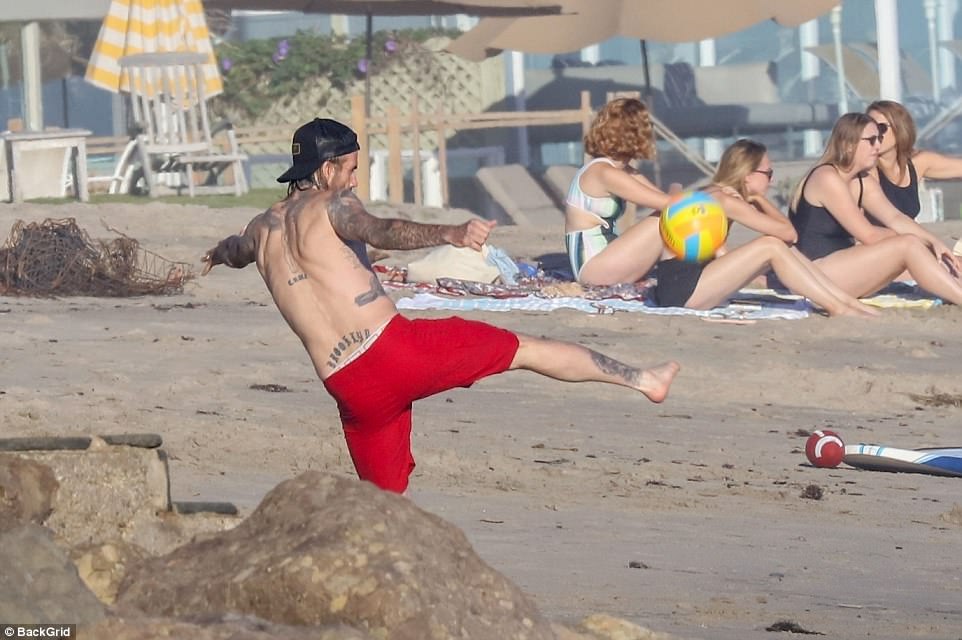 Nice kick: It’s odd that the internationally famous David did not have a proper soccer ball with him 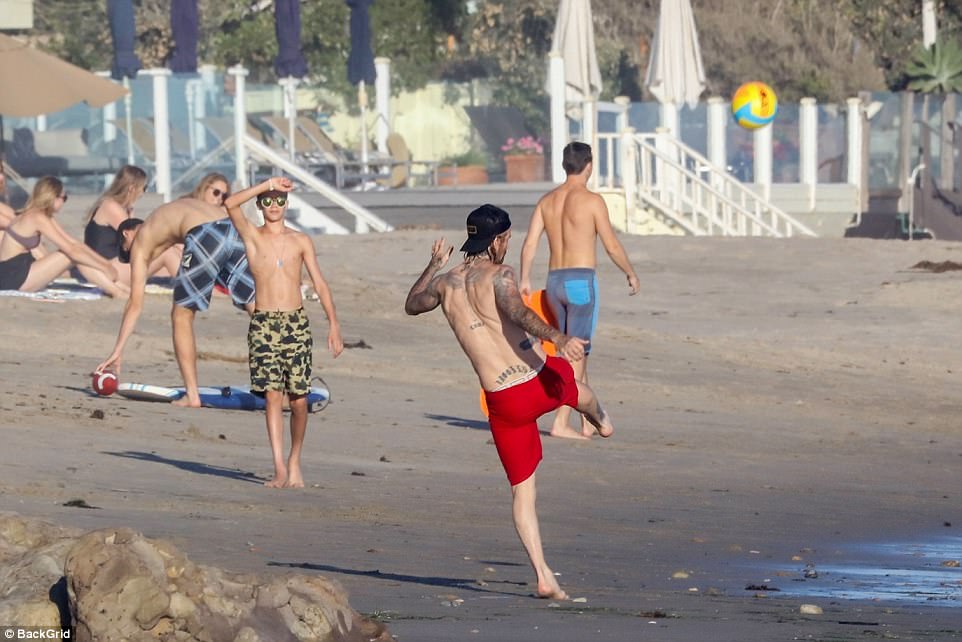 Looking amused: Romeo put his hand to his forehead as he showed off round glasses 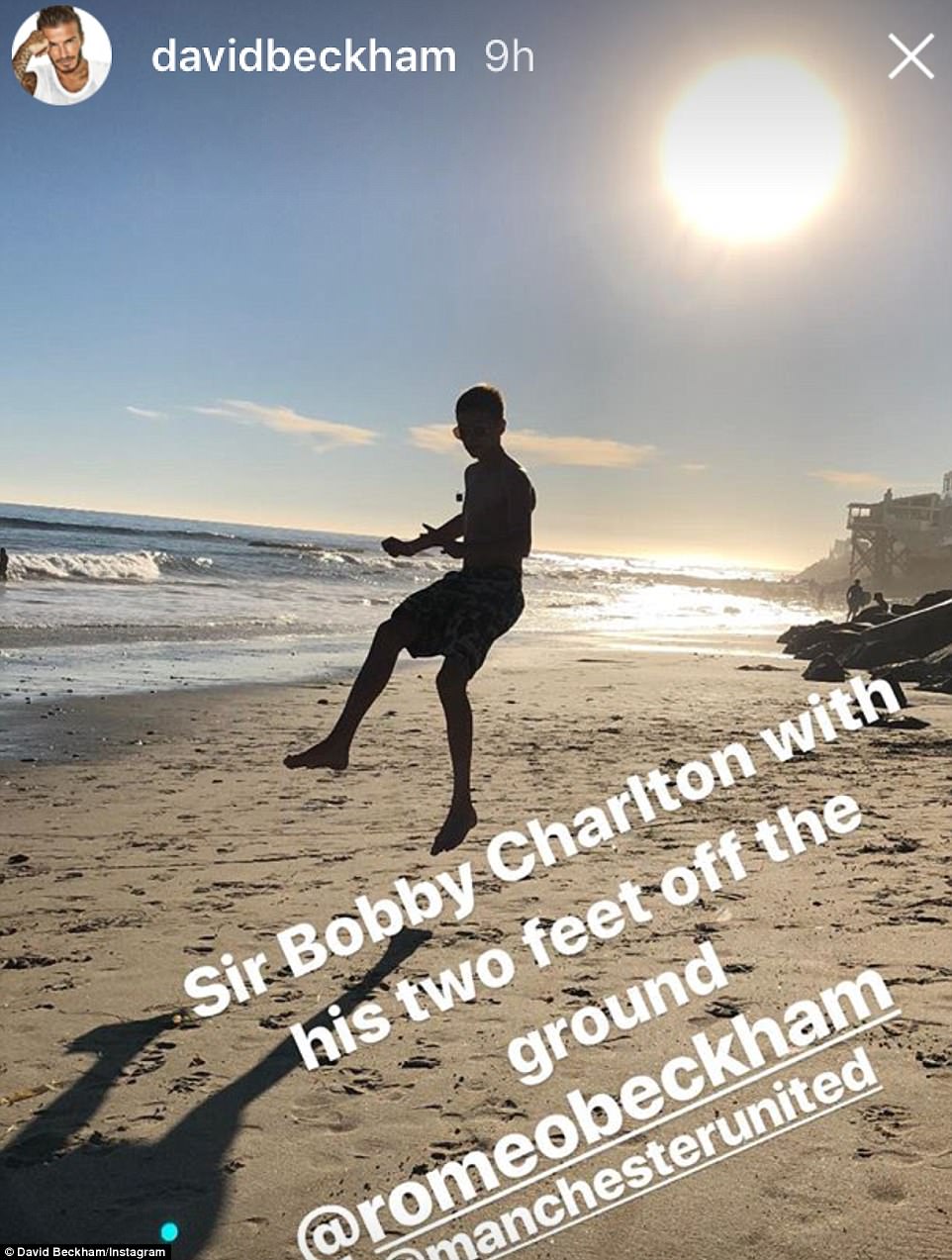 His boy: David also shared this Snapchat shot of Romeo and noted the kid had his ‘two feet off the ground’

The star shared photos on his Instagram account posing with his Brooklyn, Romeo, and Cruz in front of ghoulish carved pumpkins before enjoying the terrifying sights and sounds at Griffith Park.

Mother Victoria and daughter Harper were nowhere to be seen as the boys perused through the scary park.

David donned a black backwards cap as he hugged his sons closely in one of the images shared on his Instagram stories.

He wore a dark T-shirt underneath his warm jacket with his signature tattoos peeking through the sleeves.

David sported a pair of dark pants as he bravely took a photo near a killer clown, and captioned the image ‘treat’ with a large question mark.