‘It’s taken me hours to work out what to write and still my words won’t ever be enough’: Heartbroken David Beckham’s emotional tribute to Kobe Bryant as he recalls watching the NBA legend when they both played in LA

David Beckham has paid a heartfelt tribute to Kobe Bryant after the basketball legend passed away on Sunday.

The former Manchester United and Real Madrid star took to social media to try and come to terms with the death of his close friend and fellow athlete.

Bryant died after the helicopter he was travelling in crashed on the hills of Calabasas in California. Bryant’s daughter Gianna, 13, and seven others were also killed in the crash.

He wrote on Instagram: ‘It’s taken me hours to work out what to write and still my words won’t ever be enough to describe how I am feeling after the tragic loss of Kobe.

‘This was one special athlete, husband, father and friend. Having to write these words is hard enough but also knowing we have lost an amazing human being and his beautiful and talented daughter Gianna is heartbreaking.

‘The commitment Kobe showed to his sport was inspiring, to go through the pain and to finish a game off like only he could inspired me to try to be better. 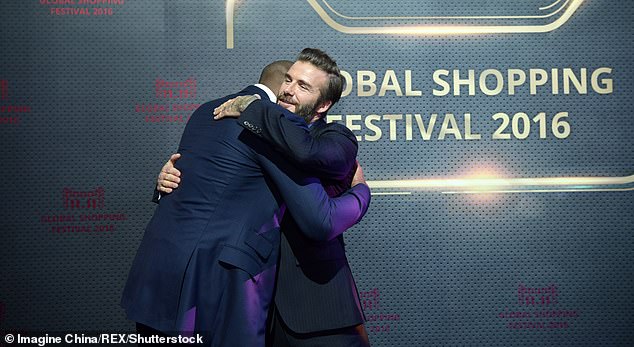 ‘Sometimes I would only go to games just to watch that clock go down to the last 2:00 minutes knowing that we were about to witness something special. Kobe always talked about Vanessa and his beautiful girls and how proud he was of them.

‘Kobe’s passion was his family and basketball. He was determined to inspire the next generation of boys and girls to embrace the sport that he loved. His legacy will live on.

‘My family’s love and prayers go out to Vanessa and the girls, to Kobe’s basketball family, and of course to the families of those who were tragically lost with him yesterday…’