David Beckham gave fans an insight into his home life as he shared a heartwarming snap of himself reuniting with his beloved dogs on Sunday.

The former footballer, 46, wrapped up in a bright orange hat and a brown body warmer as he headed out for a walk with his family’s three cocker spaniels, Sage, Fig and Olive.

Posting an adorable picture of himself gazing lovingly into his pet pooches’ eyes, he wrote: ‘I think the girls might be happy that daddy is back.’

Lazy Sunday: David Beckham, 46, gave fans an insight into his home life as he shared a snap of himself with his beloved dogs on Instagram on Sunday

The sportsman recently returned to the UK from America after seeing in the New Year with his loved ones in Miami.

Taking to his Instagram Stories on Sunday, David shared some pictures of himself with his canine friends as he went out on a wintry morning.

In one image, his dog can be seen looking up at him, with David captioning the photo: ‘Love’ and ‘that look.’ 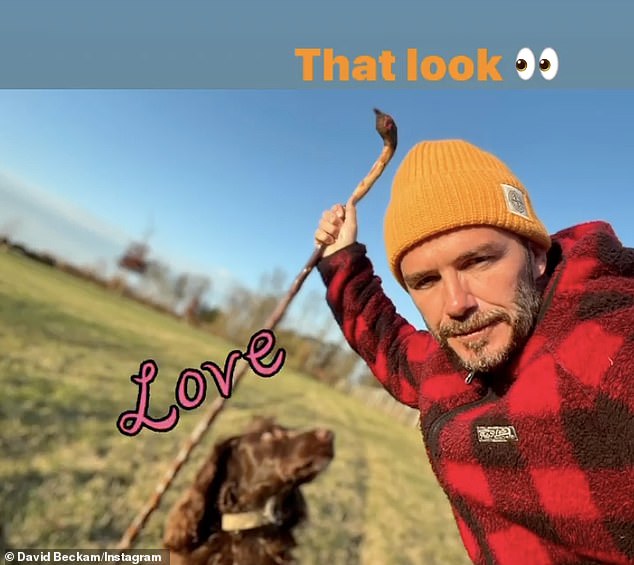 Taking to his Instagram Stories, David shared some pictures of himself with his canine friends as he went out on a wintry morning, captioning one photo: ‘Love’ and ‘that look.’ 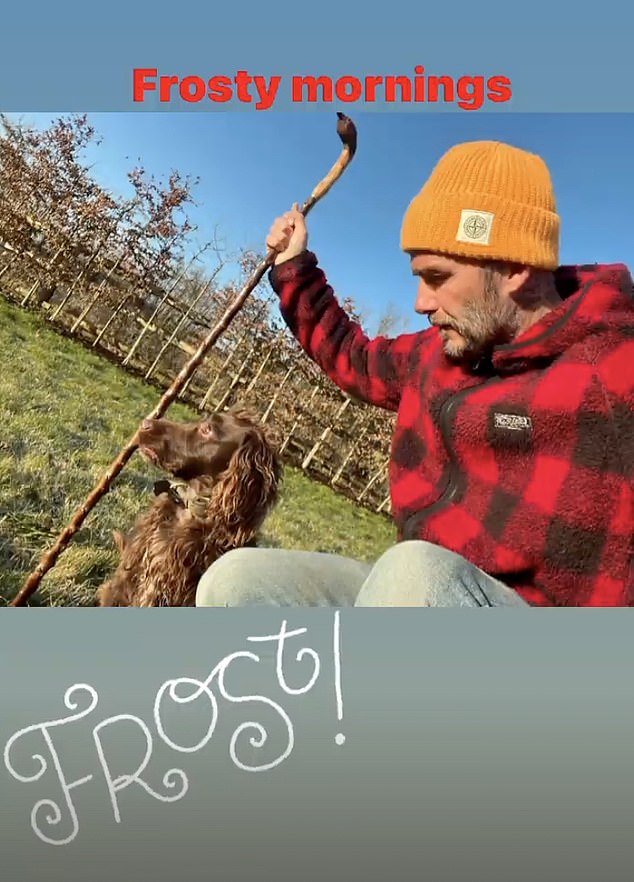 Home is where the heart is: The sportsman was reunited with his dogs after recently returning to the UK from America after seeing in the New Year with his loved ones in Miami

David’s outing comes after his son Romeo 19, showcased a Jesus cross tattoo featuring a pair of angel wings on the back of his neck as he posed shirtless for his followers this week.

Following in his famous father’s footsteps, who boasts roughly 80 pieces of body art, it seems Romeo drew inspiration from David’s 2004 gothic outline in the same spot.

He continued his growing collection with a gigantic dove inking which covered the majority of his hand, along with the words: ‘Lead with love.’ 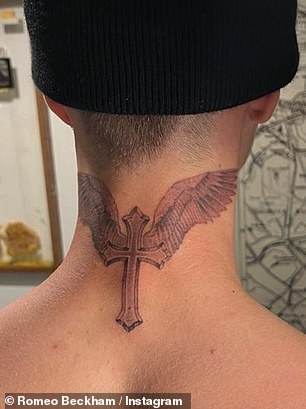 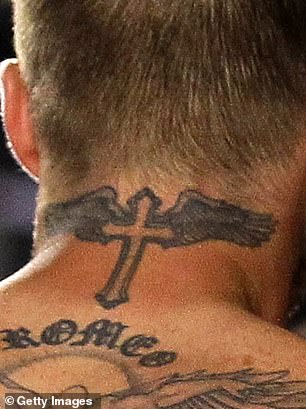 ‘Masterpiece once again’: David’s post comes after son Romeo, 19, (left) mimicked his dad (right) as he debuted a winged cross tattoo on the back of his neck and dove inking on his hand

Brian Woo, aka Dr. Woo, the artist behind Romeo’s masterpieces, certainly has a jam-packed list of high-profile clients including Cara Delevingne and Miley Cyrus.

He was also responsible for Justin Bieber’s very similar neck tatt, which the budding footballer continued to flaunt in a follow-up shot while strolling through sunny LA.

One fan penned: ‘Justin Beckham or Romeo Bieber, while another chimed in with, ‘justin?’ 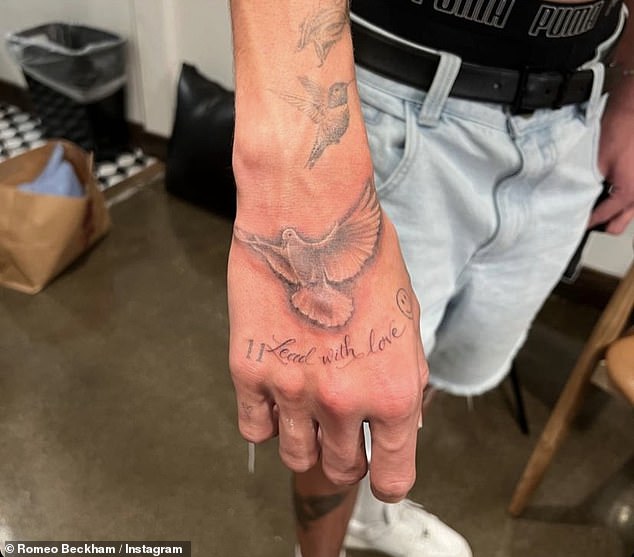 Impressive: He continued his growing collection with a gigantic dove inking which covered the majority of his hand, along with the words: ‘Lead with love’

Earlier this year, Romeo proved the apple doesn’t fall far from the tree when he debuted his previous tattoo while posing with his family in Turks and Caicos.

In the image, Romeo was showing off a previously unseen tattoo on his forearm of what appeared to be two cherubs, hot of the heels of showing off his first tattoo in January last year, when he displayed an eagle on his legs.

The superstar family patriarch, 46, and oldest child Brooklyn, 23, showed off their extensive – and in David’s case – iconic body art as they posed for the snap with Romeo, 19, and Cruz, 16, during the family holiday. 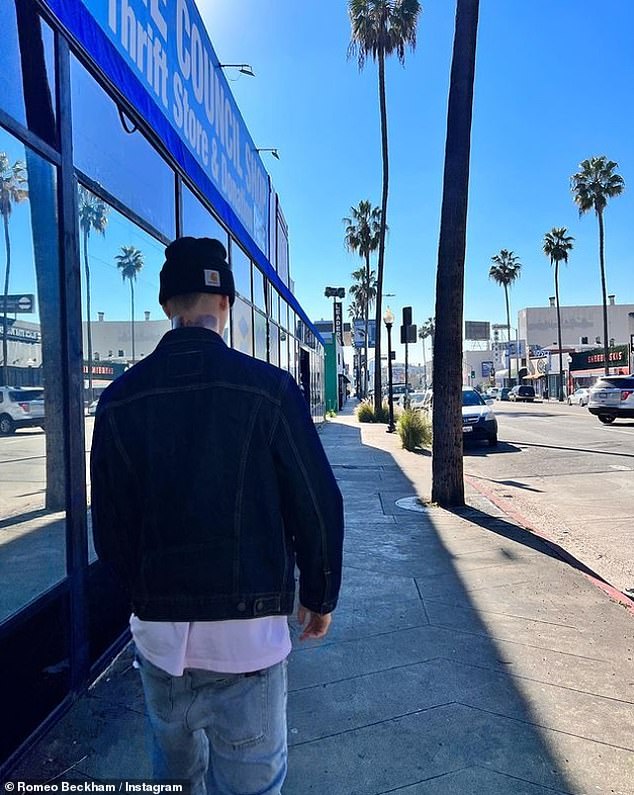 The Beckhams were certainly proving themselves to be in sync with their various tattoos, yet Cruz, at his formative age, remains clean skinned – for now.

The inking appeared to show two figures riding on what appeared to be some sort of mythical animal. The inkings joins the eagle on his right leg and one on his ribs.

Brooklyn meanwhile is quite the human canvas while their father is well-known for his extensive collection which sprawls over the majority of his body. 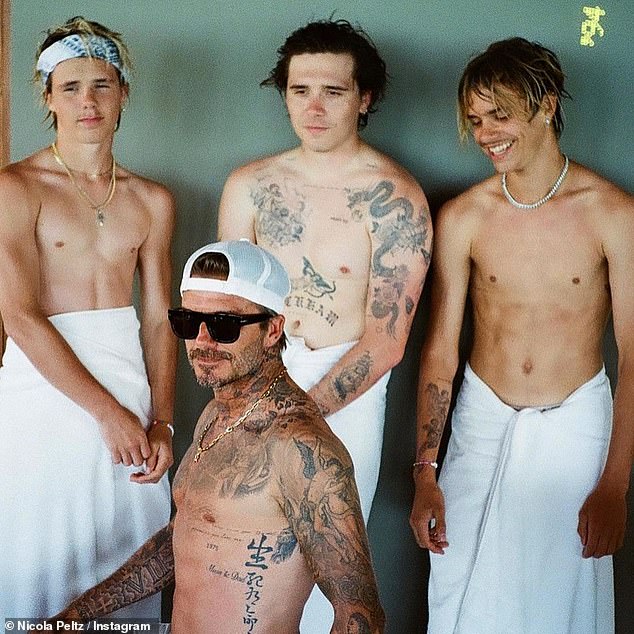 Tattoo: Romeo (far right) proved he was following in his father and older brother’s footsteps as he debuted his latest inking in a shirtless snap during their Turks and Caicos getaway (pictured with Cruz, far left, David, centre bottom, Brooklyn, centre top)