‘They’re killing you’: David Cameron admits he failed to follow advice from George Osborne to ‘destroy’ Boris Johnson and Michael Gove before the Brexit vote saying he became politically ‘paralysed’

David Cameron refused to follow advice from George Osborne to demonise Boris Johnson and Michael Gove in an attempt to win the EU referendum campaign, he revealed today.

The ex-prime minister revealed that his former chancellor and right-hand man had urged him ‘destroy their credibility’ as leaders of the Leave campaign, saying they were ‘killing’ his leadership.

It came after the Leave campaign claimed Turkey was due to join the EU, seen by opponents as an attempt to whip up anti-Muslim sentiment.

Mr Cameron accused Mr Gove of changing from a ‘liberal-minded, carefully considered Conservative intellectual to a ‘foam-flecked Faragist – a reference to Nigel Farage who has also warned about Turkish entry in a billboard advert.

He said they were ‘blatant’ in choosing a Muslim country which ‘piqued fears about Islamism, mass migration and the transformation of communities’.

A glum-looking David Cameron and George Osborne in the Commons in April 2016, two months before they lost the referendum 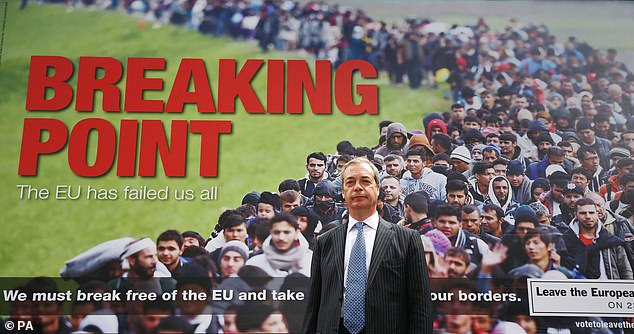 The issue of Turkish membership of the EU was used by the Leave side in the referendum, including this advert launched by then Ukip leader Nigel Farage

But he admitted in his autobiography that every time he was presented with an attack advert, including one showing ‘(Boris) Johnson in the pocket of (Nigel)  Farage’, he ‘vetoed it’.

He also refused to rule out Turkey becoming an EU member state, saying it would be ‘irresponsible’.

The end result, he wrote, was ‘paralysis’ as he became ‘caught between being a campaigner and a prime minister’. He said he chose to become ‘the latter’. 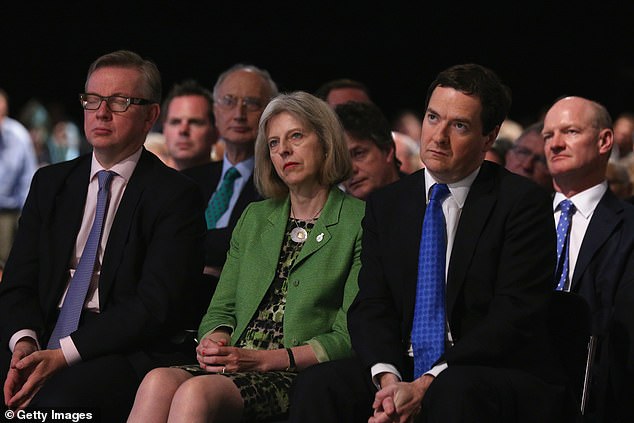 George Osborne with Michael Gove (either side of Theresa May) in 2013. During the referendum campaign the then chancellor urged David Cameron to destroy the leading Brexiteer’s credibility, but he refused