Ivan and David – their last poignant picture: David Cameron is seen holding his beloved son as they sledge down a snowy slope just days before the six-year-old’s death in image the proud former Prime Minister had framed and placed in Downing Street

Cradling his beloved son in his arms, this is the last photograph taken of David Cameron with six-year-old Ivan before the youngster died.

The previously unreleased image of the former Prime Minister and his first-born child sledging near their home in Chipping Norton, Oxfordshire, can be revealed ahead of the publication of Cameron’s memoir.

In it, he describes the loss of his child as ‘almost too painful to relate to, even to recall’. The photograph is thought to have been taken just three days before Ivan, who was born with extremely rare Ohtahara syndrome, was suddenly taken ill overnight and died on February 25, 2009.

This photograph is thought to have been taken just three days before Ivan, who was born with extremely rare Ohtahara syndrome, was suddenly taken ill overnight and died on February 25, 2009 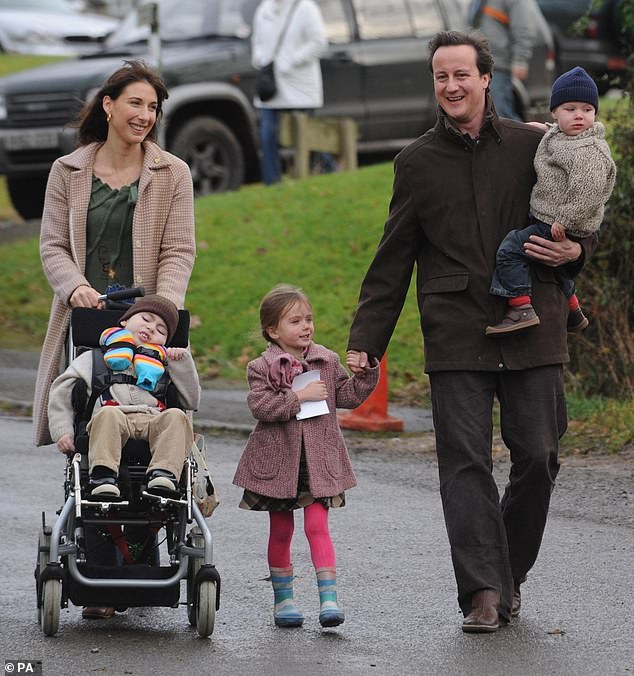 Ivan’s condition, a form of severe epilepsy, meant he could suffer up to 30 seizures a day. He also had cerebral palsy. David Cameron is pictured walking through the village of Chadlington near his Oxfordshire home after officially starting the Chadlington ‘fun run’, with his wife Samantha and children (from left) Ivan, Nancy and Elwen in 2009

Taken by a wellwisher who spotted the then Opposition Leader and his son enjoying a late winter’s morning, Cameron was said to be so enamoured by the image owing to its later significance that he had it framed and placed in Downing Street.

Ivan’s condition, a form of severe epilepsy, meant he could suffer up to 30 seizures a day. He also had cerebral palsy.

Describing his tragic passing in his book, For The Record, published tomorrow, Cameron writes: ‘A world in which things had always gone right for me suddenly gave me an immense shock and challenge.

‘Nothing, absolutely nothing, can prepare you for the reality of losing your darling boy in this way. It was as if the world stopped turning.’ 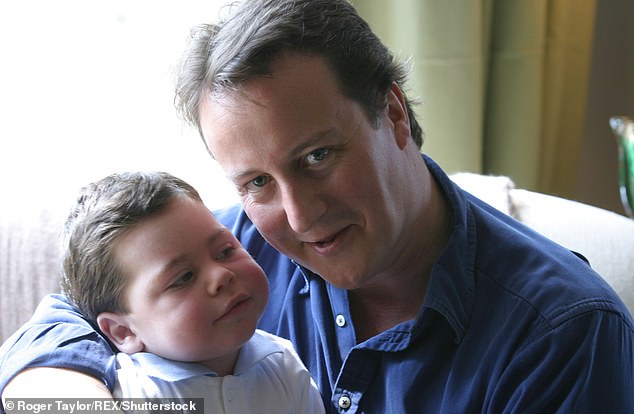 David Cameron with his eldest child Ivan in 2004, who was born severely disabled and died of organ failure in 2009

Cameron fought back tears as he discussed the death of his son on an ITV interview, which aired this week.

It came just hours after an editorial in the Guardian newspaper was roundly criticised for suggesting the former Conservative MP for Witney had suffered only ‘privileged pain’.

The photographer who took the image said he would regularly see Cameron around Chipping Norton and asked for permission to shoot, noting the snowy scene made for ‘a lovely photograph.’

He handed Cameron a copy of the image later that year after a member of his local Conservative Association, who was in touch with the MP, said he would like one.

The man, who does not wish to be named, said: ‘I didn’t realise the importance it would have, being the last photograph, at the time.

‘We met again that summer . . . and he thanked me for taking the photograph and said it was lovely and that they dearly missed Ivan.’