David Cameron reveals he reacted with ‘hilarity’ to pig claim

David Cameron has said he reacted with ‘hilarity’ to the infamous claim about him and a dead pig.

The extraordinary tale about Mr Cameron’s student days emerged in a book by Lord Ashcroft and Isabel Oakeshott on the eve of the Conservative conference in 2015.

The book claimed that Mr Cameron had inserted ‘a private part of his anatomy’ into a dead pig’s mouth in a bizarre initiation ritual for an Oxford club.

In his newly published memoirs, Mr Cameron calls the story ‘false and ludicrous’ and says he ‘couldn’t believe someone could be so stupid’ as to publish it.

‘A biography was published on the Monday before our party conference,’ Mr Cameron recalls in his autobiography For The Record.

‘Over the months my team and I had joked about what it might contain.

‘But even the most creative (or lewd) among us couldn’t have dreamed up its most widely reported claim, which was that I’d done something disgusting to a dead pig at a university society initiation…

‘My first reaction wasn’t anger or embarrassment, or worry about the impact. It was hilarity.

‘I couldn’t believe someone could be so stupid as to research and write a book about me and include a story that was both false and ludicrous.’

Lord Ashcroft had donated millions to the Conservatives before falling out with Mr Cameron.

Mr Cameron was part of the elitist Bullingdon Club at Oxford which also included his eventual successor Boris Johnson.

He says he ‘cringes’ over the photograph of his time there, but says stories of excessive drunkenness are exaggerated.

But he admits taking part in an unusual ritual in which he was woken up in the middle of the night and had his room turned ‘upside down’.

Mr Cameron’s dismissal of the ‘pig-gate’ story is one of many new revelations in his memoirs.

Some more are published below.

Samantha had seen the big picture rather quicker and clearer than me. Iain Duncan Smith was always going to be seen as an outdated old clunker… He wasn’t capable of some of the basic requirements of leadership in British politics.

Our personal relationship wasn’t that bad. He was convivial and enjoyed political gossip. He was also amazingly tactile – a big hugger and kisser – often with a strong aroma of his trademark scent of brandy and cigarette smoke.

‘He is a European integrationist to the core, an architect of Maastricht and monetary union… For the EU’s survival, for Britain’s future in it and my renegotiation, there could hardly have been a worse candidate (for Commission president).’

Desmond Swayne (his parliamentary private secretary) advised me on appointments… and had a nickname for everyone – ranging from ‘Poshy Posh’ to ‘Mincehead’. Theresa May, who he advised me to get rid of twice …was referred to by Dessie as ‘Cruella’, while Theresa Villiers was ‘Morticia’.

It was a mistake of mine to refer to Ukip as ‘fruitcakes, loonies and closet racists’ – not because it wasn’t true of some of its members, but because saying so alienated those Ukip supporters we were trying to win back… the party remained a haven for the unsavoury. 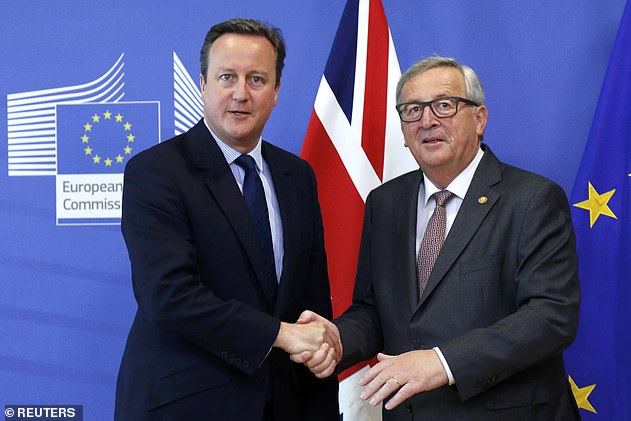 Jean-Claude Juncker privately promised David Cameron (pictured together days after the EU referendum) that he wanted to ‘make Brexit work’, the ex-PM has revealed

I don’t buy the argument that people didn’t know what they were voting for or that misinformation propagated during the campaign means that the result should be annulled.

We did, however, fail on one of the biggest long-term problems – capping the cost of social care for individuals. That is one of my greatest regrets.

After the Lib Dem leader scotched plans for a review of constituency boundaries:

‘I felt cheated by him. Here was this reasonable, decent person I had worked with over two years being disingenuous and – frankly – dishonourable.’

He kept asking whether I thought he could do things like PMQs differently. ‘Do I have to do it all myself? Can I share it out?’ he said. I said it was up to him and the Speaker – he could do what he liked.

I think he was wrong not to act faster and try harder (on Syria). His handling of Assad is still the thing I regret most about his entire presidency. If we’d done more to help the Syrian opposition in the beginning, we might have rid the country of this murderous tyrant, and the later war against the ISIS brutes might not have been necessary.