David Gauke has warned he could quit the Cabinet if Theresa May pushes ahead with a no deal Brexit.

The Justice Secretary said he would find it ‘very difficult’ to stay in the Government if the UK appeared on course to crash out of the EU.

His comments come as the PM is struggling to keep her warring ministers in line as they jostle to lay out their own visions of Brexit.

Mrs May has warned that Britain could crash out of the Brussels bloc unless MPs vote for her Brexit deal.

But speaking to the BBC’s Political Thinking podcast, Mr Gauke lashed talk of a no deal.

He said: ‘I think making a conscious decision to proceed with no deal would not be the responsible course of action.’ 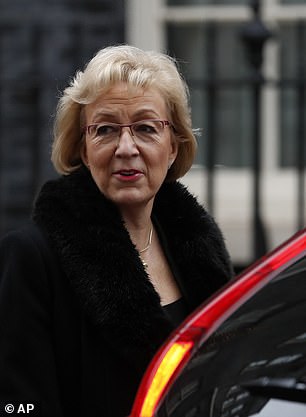 David Gauke (pictured left) has warned he could quit the Cabinet if Theresa May pushes ahead with a no deal Brexit. Meanwhile, Commons leader Andrea Leadsom (pictured right) has urged Mrs May to push for a managed no deal Brexit if her deal is rejected by MPs next month

He said he would be ‘very surprised if the Prime Minister went down that route’.

Asked if he could remain in the Cabinet if that became the Government’s policy, he added ‘I think it would be very difficult for me in those circumstances.

‘I am conscious that there is a risk of an accidental no deal… Although Parliament clearly doesn’t want no deal, it’s not clear that there is a majority for a specific course of action to stop no deal.

‘The best way of stopping no deal is to back the Prime Minister’s deal in my view.

‘So I think it would be very difficult and I think if it came down to the Government saying consciously, ‘well, we’ll just have to do that’, I don’t think there would be a lot of support for it.’

The Cabinet is deeply divided over what to do if the PM’s Brexit plan is defeated by MPs in the Commons next month.

And No10 fear a string of Cabinet ministers could quit if the UK looks set for a no deal – including Work and Pensions Secretary Amber Rudd, Education Secretary  Damian Hinds and Scotland Secretary  David Mundell – as well Mr Gauke.

Ms Rudd has broken ranks with the PM to publicly say there is a ‘plausible argument’ for a second EU referendum if MPs cannot agree a Brexit deal.

But leading Brexiteers in the Cabinet, including Commons Leader Andrea Leadsom, are pushing for a ‘managed no deal’ if no agreement can get through Parliament.

Confronted about the splits at her top tale during a press conference in London yesterday, the PM insisted all ministers are focused on getting a deal.

She said: ‘Everybody is very clear that not only what Government policy is but what we are all individually and collectively focused on is working to ensure that that deal is able to be agreed by and go through a meaningful vote in the House of Commons.’ 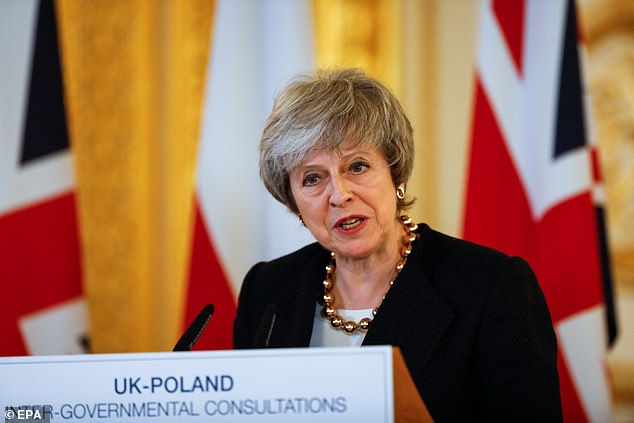 But she is set to face a New Year Brexit battle as Tory Remainers join forces with Labour MPs to kill off a ‘no deal’.

The group of MPs are tabling a slew of amendments to key pieces of legislation to try to bind the Government’s hands so Britain cannot crash out of the bloc.

Tory MPs Nicky Morgan and Sir Oliver Letwin have joined with Labour’s Yvette Cooper and Hilary Benn to table an amendment to the Finance Bill.

If passed, it would stop the Government from changing taxes if there is a no deal Brexit without Parliament’s explicit consent.

Further amendments are expected to be drafted to key pieces of Brexit legislation as part of the same campaign.

The MPs hope that they can stop a no deal Brexit and get the Government to pursue a ‘plan B’ if Mrs May’s deal is voted down as expected next month.

They hope that the PM could be forced to adopt a softer Brexit – like a Norway-style deal which would keep Britain tied to EU rules and keep free movement.