David Hasselhoff on why life’s a beach

In 1995, when David Hasselhoff was invited to the White House to meet Bill Clinton, he was surprised when the president invited him to go jogging the following day. ‘He was talking about how difficult it was to be president and saying: “It’s not about what I can do – it’s about people being self-serving, getting the credit,” and I thought, wow, he’s being really honest. And then he said: “You ever think Baywatch would be as big as it is?” I replied: “I never thought the President of the United States would utter the two syllables Bay-watch!” and he laughed so hard, we could hardly run.’

Come the turn of the century, David Hasselhoff was dismayed to see his stock fall. Undeterred, he reinvented himself as The Hoff, an exaggerated take on his own persona

Everyone has heard of Baywatch – in the Nineties, it had more than a billion viewers a week in 142 countries – and everyone has heard of Hasselhoff, who once held the Guinness World Record for being the most-watched man on TV, thanks not just to the aforementioned hit show, but to his lead turn in Eighties series Knight Rider. He enjoyed a famous and somewhat inexplicably huge singing career in Germany (his 1989 hit, Looking For Freedom, became the anthem of East Germans when the Berlin Wall came down). And even Prime Minister David Cameron wanted a piece of him. ‘I’d been invited to Parliament and I was trying to leave, but I couldn’t get a cab,’ he says. ‘I found out later that security was out there saying [to the drivers]: “Whatever you do, don’t pick up David Hasselhoff because David Cameron wants to meet him.” He said he was a big fan and he got a picture.

Hasselhoff today is certainly upbeat. Fortified by numerous energy drinks, he bounces around his LA hotel room in white jeans, blue suede loafers and a turquoise shirt open wide enough to expose a prodigious expanse of Hasselhair. At 65, he looks in fine fettle, and says after cameos in two of the year’s big hit movies – Guardians Of The Galaxy Vol 2 and the Baywatch remake – ‘this year has seen a resurgence of David Hasselhoff as an actor’. Yes, he really does refer to himself in the third person. ‘I’m not the best singer in the world and I’m not the best actor – I know that for sure – but I’m good at what I do and it’s because I’ve worked really hard to get there.’ 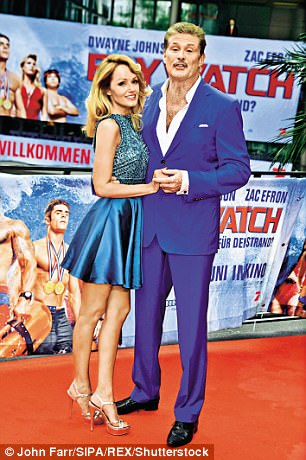 After the huge successes of Knight Rider and Baywatch, come the turn of the century, Hasselhoff was dismayed to see his stock fall. Spells in rehab for alcohol abuse and the disintegration of his second marriage, to actress Pamela Bach, caused the work to dry up. Undeterred, he reinvented himself as The Hoff, an exaggerated take on his own persona. It led to the Emmy-winning comedy series Hoff The Record, numerous cameos as himself in movies such as Piranha 3DD and stints on Britain’s Got Talent and America’s Got Talent. It has also led to his latest movie, Killing Hasselhoff. It stars Ken Jeong from The Hangover as a struggling nightclub owner who decides to kill David Hasselhoff – his entry in a celebrity death pool – in order to secure the $567,000 prize money. It’s somewhat bonkers, obviously, although it does beg the question: has anyone ever threatened to kill the real Hoff?

‘Yeah, sure,’ he replies, before adding rather cryptically: ‘I haven’t had anything that’s become the reality of what this movie is, but I have had a situation where I’ve had to kind of intervene and talk some sense into people who were at one point discussing taking me and,’ he adds hesitantly, ‘maybe not killing me, but convincing me of something and trying to get something out of me that doesn’t exist. Anyway,’ he adds with some finality, ‘that’s way in the past.’

What is clear from the film is that not only can The Hoff laugh at himself, but that he isn’t afraid of alluding to the more troubling periods of his past. In Killing Hasselhoff his manager, played by Jon Lovitz, at one point asks: ‘Are you drinking again?’ It’s a surprisingly direct reference to his well-publicised battles with alcohol and calls to mind the infamous video shot by his then-teenage daughter Taylor-Ann in 2007, showing him drunkenly eating a cheeseburger off the floor – which went viral within days and prompted him to seek help for his addiction. 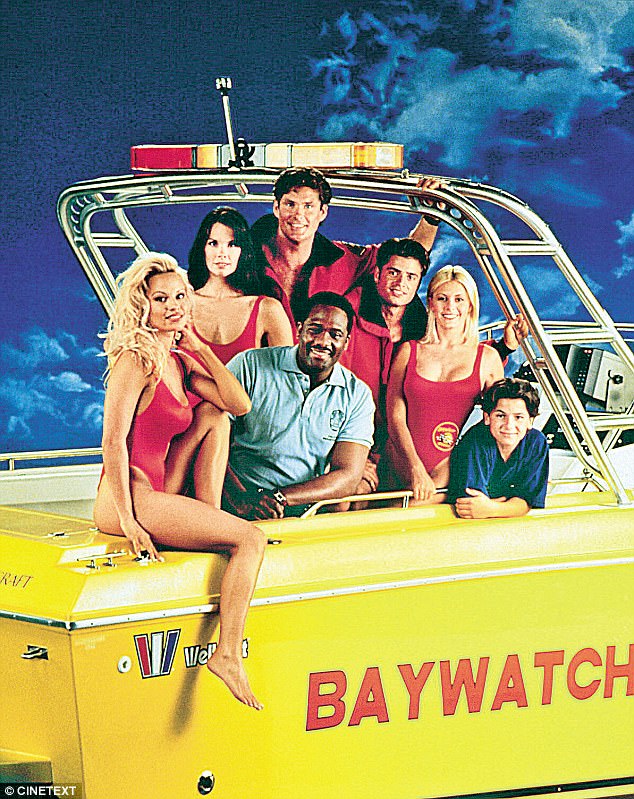 Everyone has heard of Baywatch – in the Nineties, it had more than a billion viewers a week in 142 countries

His former wife Pamela Bach, the mother of his two daughters – Taylor-Ann, now 27, and Hayley, 25 – was suspected of leaking the video (they were divorced the year before the incident, after 17 years of marriage). But Hasselhoff later conceded he was ‘glad’ the tape was made. ‘It’s honest with both barrels,’ he admitted. ‘And prior to that I wasn’t being honest. So [my kids] said: “Dad, we don’t need a drunk. We need a responsible parent. Carry on doing this to your body and you will die’, adding that it was his ‘girls’ honesty that saved me’. In any case, says Hasselhoff, ‘life goes on and when I realised that, I stopped getting mad about it and trying to kill everybody and hanging my head in shame. You see it every day in the world. It was like: get over it.’

If anything, the video increased Hasselhoff’s appeal, showing an honesty and vulnerability that might not always have been apparent. He once admitted he drank ‘to kill anxiety and loneliness’ and if anyone can possess a self-deprecating egotism, it’s The Hoff. ‘People can curl up and watch this film,’ he says, ‘and see that even Hasselhoff is capable of being a human being.’

Hasselhoff got his big break as a 23-year-old in the soap The Young And The Restless, before landing the lead role in Knight Rider in 1982. The show brought him worldwide attention, although his success was to have a corrosive effect on his first marriage, to actress Catherine Hickland. In 1989 came Baywatch and even greater fame. Hasselhoff’s value has been estimated at anywhere between $10 million and $110m – which would he say is nearer the mark? ‘Well, the story is I’m going to be back in court soon and you’ll hear more about that in times to come.’ 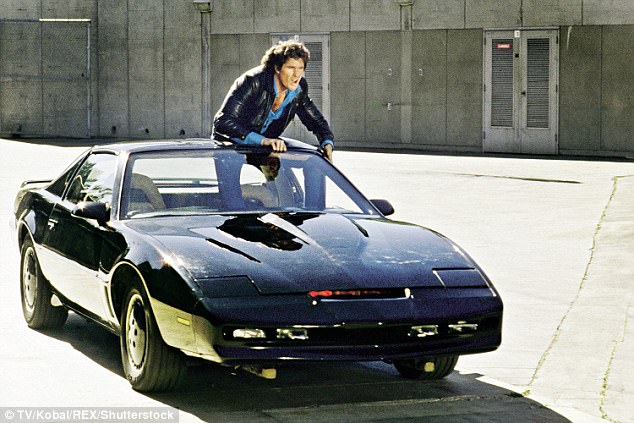 Hasselhoff got his big break as a 23-year-old in the soap The Young And The Restless, before landing the lead role in Knight Rider in 1982

Last year, he filed legal papers saying that he couldn’t afford to pay Pamela Bach $21,000 a month in spousal support and had less than $4,000 in the bank after living expenses. It was subsequently agreed the payments could be halved, although according to most recent reports, he has now filed documents requesting an immediate end to the alimony payments having already paid $2.5m to Bach in spousal support (he maintains a failure on her part ‘to make any efforts to become self supporting’). So is The Hoff broke? ‘No, no!’ he insists. ‘I never bought yachts or anything – I’ve always managed to have someone else pay for things! People seem to love Knight Rider or Baywatch wherever I go, so if there’s a $1,800-a-day hotel suite, I can make a sweet little deal just by doing something for them in return. The [most extravagant thing] I blew money on was attorneys’ fees. Still, he says, ‘my life is good now’, not least because of his Welsh fiancée Hayley Roberts, whom he met six years ago while filming Britain’s Got Talent (she asked for his autograph; he asked for her number). At 37, she is 28 years younger than The Hoff, but judging by his Red Bull-powered performance today, he’s certainly not lacking in the energy department.

The couple have recently been pictured enjoying a holiday in Ibiza and, after a slew of proposals, he formally popped the question to the former shop assistant in Malibu last year, in front of a Hello! magazine cameraman, invited by Hasselhoff to record the happy event. ‘Hopefully, we’ll get married a year from now, in August,’ he says. ‘We’re planning on it.’

The only thing that gets him down, he says, ‘is when I don’t have something to do – I’m not good at relaxing’, although there seems little chance of that. He reels off a list of future projects including a potential Knight Rider reboot with Guardians Of The Galaxy director James Gunn, and a project he’s trying to get off the ground entitled Our Man Hoff, which sees him as a secret agent who, from his excitable description, appears to take out female villains by making love to them till they die. 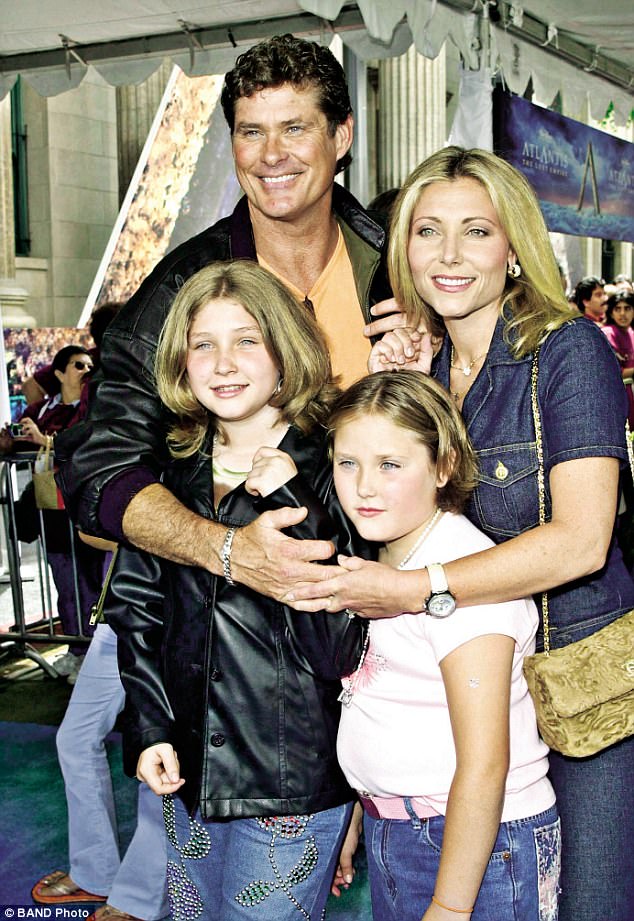 And with that, The Hoff is off. ‘I’ve made such a good living the last six or seven years, doing whatever I have to. Just give me a call sheet,’ he says, ‘I don’t care what it’s for. I’ll make it work, baby!’