David Hockney’s painting The Splash is going under the hammer, with an estimate price tag of £20-30 million. Pictured: Hockney in 2015

David Hockney’s painting The Splash is going under the hammer, with an estimate price tag of £20-30 million.

The artwork, described as ‘a breath-taking realisation of David Hockney’s Californian fantasy’ will be on offer at Sotheby’s Contemporary Art Evening Auction in London in February.

The 1966 painting will be offered with an estimate of £20-30 million – more than six times the price achieved when the work last sold at auction.

In 2006 it made a record for the artist at auction at the time when it sold for £2.9 million at Sotheby’s London.

The Splash immortalises a fleeting moment just seconds after a diver has broken the calm surface of a swimming pool.

It is the second in a series of three ‘splashes’, the largest of which, A Bigger Splash, is in the Tate collection in London.

The other splash in the series, A Little Splash, remains in a private collection.

Emma Baker, head of Sotheby’s Contemporary Art Evening Sale, said: ‘Not only is this a landmark work within David Hockney’s oeuvre, it’s an icon of pop that defined an era and also gave a visual identity to LA. 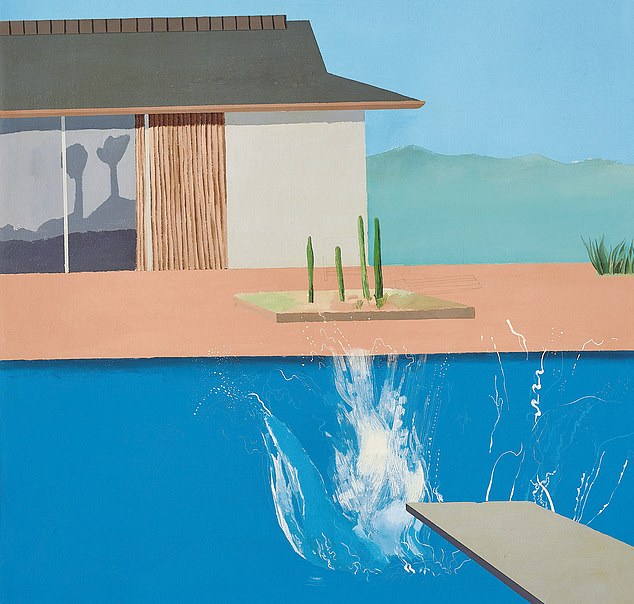 ‘Even looking beyond the twentieth century, few artworks have attained as mythic a status as this painting.

‘Equally as recognisable as Munch’s series of screams, Monet’s water lilies or Van Gogh’s flowers, Hockney’s splash is ingrained within our cultural imagination.’

The Splash will go on view at Sotheby’s Hong Kong, Taipei, New York and London prior to the Contemporary Art Evening Auction on February 11.