‘I’m not going to stop’: Parkland survivor and anti-gun activist David Hogg says he’s been the target of SEVEN assassination attempts in the past year – but vows to continue fighting against gun violence

David Hogg, 19, who has emerged as a prominent anti-gun violence activist after surviving the deadly school shooting in Parkland, Florida, in 2018, has revealed that he has been the target of seven attempts on his lives over the past year.

Hogg, who will be attending Harvard University in the fall, is a co-founder of Never Again MSD, a group he and other Marjory Stoneman Douglas High School students founded that is pushing for stricter gun laws.

His activism led to death threats against himself and his family.

School shooting survivor and outspoken gun control activist David Hogg, 19 (pictured at a rally in Washington Dc in March), said there have been seven attempts on his life over the past year

In an interview with The Washington Post published on Wednesday, a defiant Hogg spoke matter-of-factly of the turmoil sparked by his work related to gun violence.

‘In the past year, there have been seven assassination attempts,’ he said, before adding, ‘if they kill me, that’s probably the stupidest thing they could do to try to end the movement. Because that would make it even more successful in the end. Because it would invigorate us and create f***ing change.’

Hogg, who co-wrote a book with his younger sister, Lauren, ‘#NeverAgain: A New Generation Draws the Line,’ acknowledged that being on the receiving end of hatred is horrible and traumatizing, but said he has become desensitized to it.

‘Like, oh, your house got SWAT-ted. You got a call from the police saying someone said that everyone in your family had been killed and that you are being held hostage for $100,000. Right? That becomes part of daily life. It’s just something that you have to get through.’

A defiant Hogg said he will not be intimidated or silenced on the issue of gun control.

‘I’m not going to stop,’ he said. ‘I want to go to school and, for lack of a better word, weaponize my knowledge and learn as much as possible to end violence.’

Last June, Hogg’s family home in Broward County, Florida, was surrounded by a SWAT team in response to a prank call claiming that a stabbing had occurred and that someone was barricaded inside. 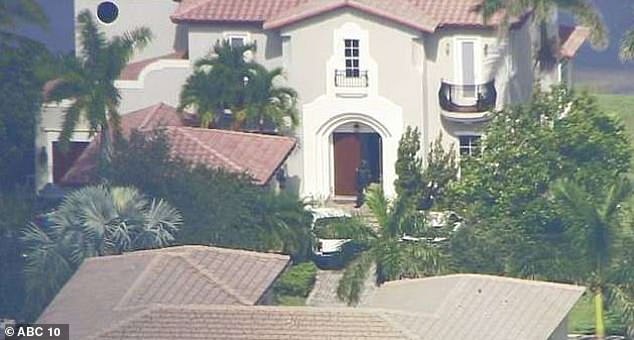 In June 2018, Hogg’s family home in Florida (pictured) was ‘swatted’ while he was away

Hogg was not home at the time of the ‘swatting’ incident: he and his mother were in Washington DC to accept the Robert F Kennedy Human Rights Award for his activism.

The incident came less than five months after Hogg survived the school shooting in Parkland that claimed 17 lives.

He and several other survivors, among them Emma Gonzalez, Cameron Kasky and Jaclyn Corin, have emerged as outspoken advocates for stricter gun control laws and fierce opponents of the National Rifle Association, staging rallies, marches and boycotts, and using social media as a bully pulpit to push for change.

In his interview with the Post, the incoming Harvard freshman sought to poke holes in the argument that gun violence is the price that Americans have to pay for having Second Amendment rights.

‘People say guns are related to freedom and patriotism,’ he said, ‘but living through instances of gun violence on a daily basis and children having to go through active shooter drills is not what freedom looks like to me. It’s what f***ing corruption looks like to me. A corrupt system that doesn’t care about our children.’

Hogg, however, was hopeful that gun control will emerge as a key issue in the next election cycle, or the one after that, and explained that the work he and other teenagers are now doing in that area will be brought to fruition by the next generation.