Labour MP David Lammy has compared Jacob-Rees Mogg and Boris Johnson to Nazis in a rant on the Andrew Marr show.

The second referendum campaigner likened the Conservatives figures to Hitler in the damning outburst on the BBC programme on Sunday.

The rant has sparked fury among Conservatives who claim the MP for Tottenham has ‘lost it’ with the comparisons to ‘white supremacists’.

Mr Lammy was asked about whether a comparison he previously made between the European Research Group (ERG) and the Nazi Party and South African racists was unacceptable.

But Mr Lammy said those comparisons were ‘not strong enough’, and referred to Rees-Mogg retweeting the far-right Alternative for Germany and Boris Johnson meeting Donald Trump’s adviser Steve Bannon.

He replied: ‘In 1938 there were allies who hatched a plan for Hitler to annex part of Czechoslovakia, and Churchill said no, and he stood alone.

‘We must not appease. We’re in a situation now, and let me just be clear, I’m an ethnic minority.

‘We have, in the ERG, in Jacob Rees-Mogg, someone who is happy to put on to his web pages the horrible, racist AfD party, a party that’s Islamophobic and on the far right.’

Mr Lammy added: ‘They’re happy to use the phrase “grand wizard”. KKK is what it evokes to me when I think of that phrase and the Deep South. 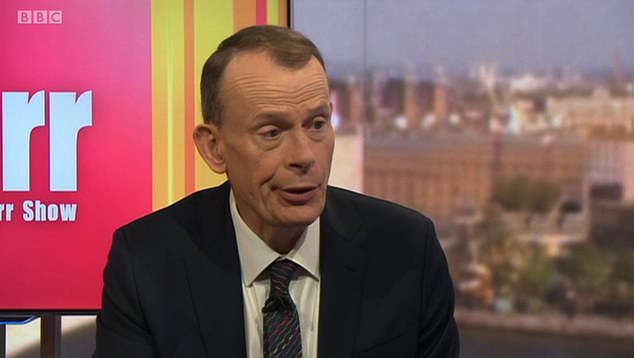 Asked by Marr if he regrets the comments, Mr Lammy told the BBC: ‘I would say that wasn’t strong enough.

Marr refuted that it was ‘dangerous’ to accuse the politicians of being similar to Nazi ideology.

Asked if he regretted the comments, Mr Lammy told the BBC: ‘I’m not backing off on this – never will I back off on this on behalf of my constituents.

‘The BBC should not allow this extreme hard-right fascism to flourish.’

When Andrew Marr pointed out the Brexiteers were elected as politicians, Mr Lammy said: ‘I don’t care how elected they were, so were the far right in Germany.

‘British soldiers in this country died fighting this thuggery and extremism and here we are in 2019 with people bringing it into the mainstream for their political advantage.’

The AfD was founded in 2013 as a Eurosceptic party in Germany, and has since campaigned for tougher immigration laws. Mr Rees-Mogg has previously denied supporting the party.

Mr Lammy added: ‘What kind of country are we going to be like if these people are running it?’

When it was put to Mr Lammy that he was saying Mr Rees-Mogg and Boris Johnson are equivalent to Nazis, Mr Lammy said: ‘Ask Boris Johnson why he’s hanging out with Steve Bannon.’

The furious outburst by Mr Lammy was slammed by Tory MPS who said the Labour veteran’s claims were ‘bats**t and that they had lost respect for him.

Conservative MP Conor Burns said: ‘I used to have regard for David Lammy. But this is bats**t. Comparing ERG to Hitler is quite something. Fully lost it.’

Mr Lammy later Tweeted: ‘I will never back down from calling out links to the extreme right. We must not appease or concede ground, we must call it out for what it is.’