David ‘Big Papi’ Ortiz is celebrating being home with family by grilling a big juicy steak after spending more than seven weeks in Massachusetts General Hospital.

In his first social media post since the failed assassination attempt, Ortiz shared a touching message with fans.

‘Being at home and look at my family celebrating that l’m here safe is priceless,’ Ortiz wrote. ‘Thank for all the prayers.’

David ‘Big Papi’ Ortiz is thankful to be home after surviving a botched assassination attempt on June 9 in Santa Domingo, Dominican Republic 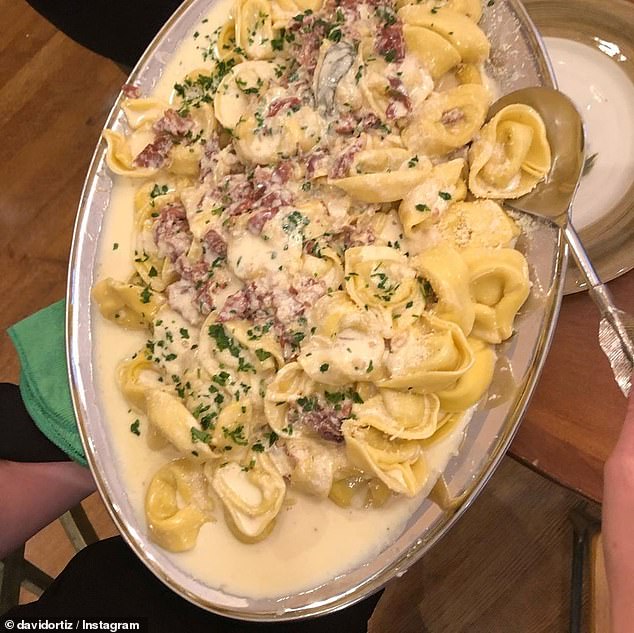 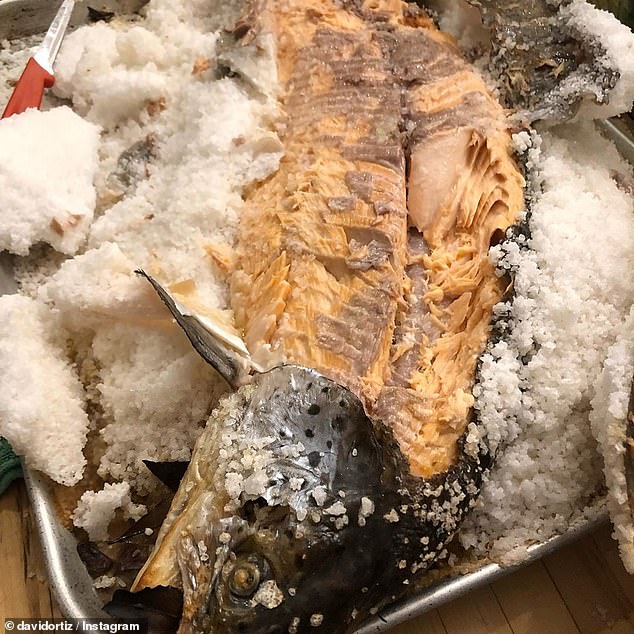 He posted pictures of  his food joking: ‘Too bad l can’t crush food yet’

The sweet note is attached to a string of photos of a thick steak on the grill, a creamy pasta dish and a partially gutted fish.

Unfortunately, Ortiz may have to wait a bit longer to chow down on his meal.

Ortiz was shot in the back with a Browning Hi Powered semi-automatic pistol on June 9 at a nightclub in Santa Domingo, Dominican Republic.

According to Attorney General Jean Alain Rodriguez, Ortiz was not the intended target that evening and the bullet was meant for Ortiz’s friend, Sixto David Fernandez.

WCVB reports that Fernandez usually reserves a table at the Dial Bar and Lounge on Sundays where the attempted murder took place. 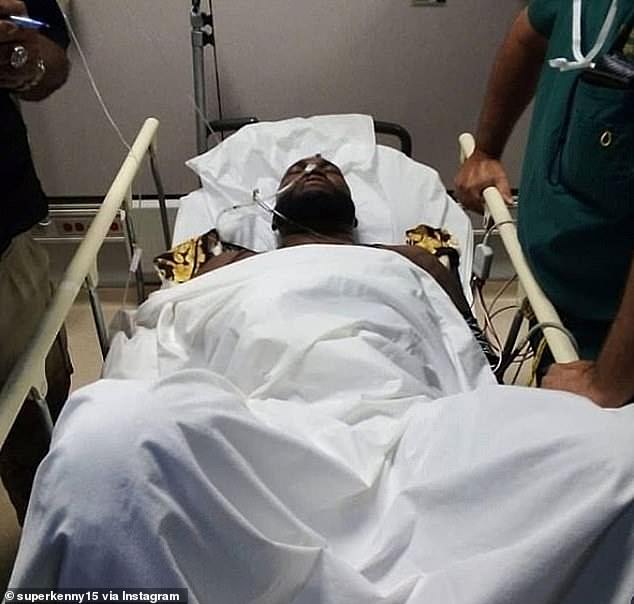 Ortiz was shot in the back at a nightclub after being mistaken for the intended target, his friend, Sixto David Fernandez 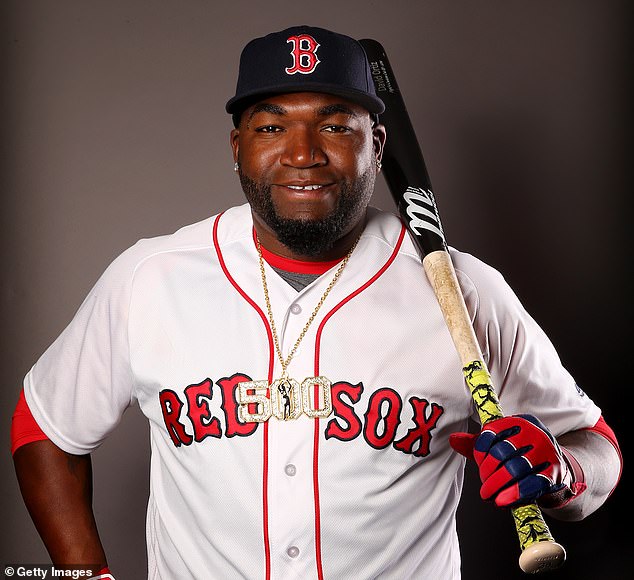 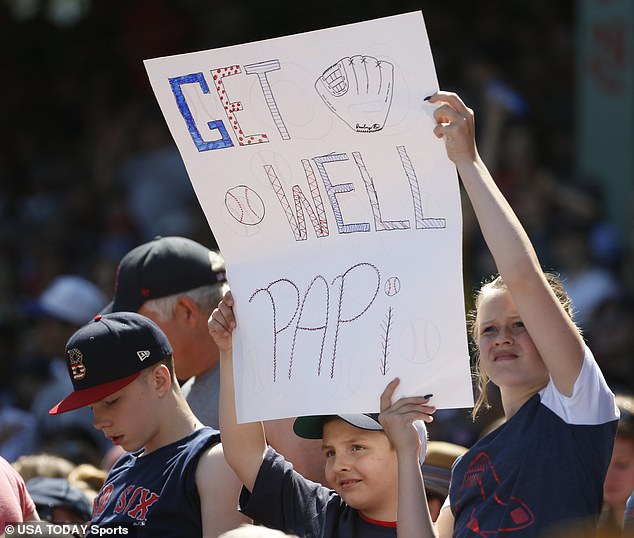 After more than seven weeks in the hospital, Ortiz was released on Friday, July 26. Fans hold up a sign for Ortiz during the fourth inning of a game against the Chicago White Sox at Fenway Park on June 26

That night, Ortiz and Fernandez were dressed in similar outfits and were seated at the same table.

The gunman was shown a photo of the table moments before the attack, but became confused due to the nightclub’s low lighting.

Still mistaking Ortiz for Fernandez, the gunman arrived to the club, ambushed Ortiz from behind and shot him at point-blank range at around 8.50pm.

Ortiz was taken to a hospital in the Dominican Republic where he had a six-hour surgery, resulting in the removal of his colon, gallbladder and part of his intestines.

On June 10, Ortiz was transported to the Massachusetts General Hospital for further treatment and arrived around 10.30pm. 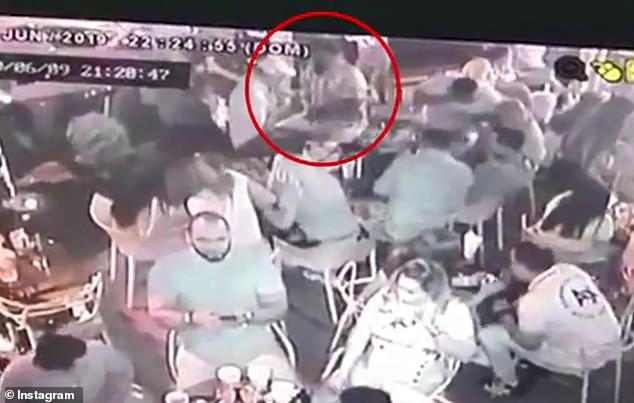 Ortiz underwent three surgeries before being released on Friday.

On June 11, 25-year-old Eddy Vladimir Feliz Garcia was charged with homicide, criminal association and intentionally causing injury through use of an illegal firearm.

Garcia reportedly confessed to participating in the shooting, but Garcia’s defense team said the man did not shoot Ortiz.

Rolfy Ferreyra Cruz aka ‘Sandy’, 25, was arrested as the potential gunman after officials say he confessed to the crime.

It is believed that Victor Hugo Gomez Vasquez is the mastermind behind the attempted hit.

He allegedly hoped to kill Fernandez, his cousin, because Vasquez believed Fernandez had snitched on him to local authorities about a 2011 drug case that led to Vasquez’s imprisonment.

In total, fourteen people have been arrested in connection to Ortiz’s shooting.

In an official statement to the media, Ortiz called the medical team at Massachusetts General Hospital, ‘some of the best teammates I ever had.’

Ortiz will continue to recover at his home. 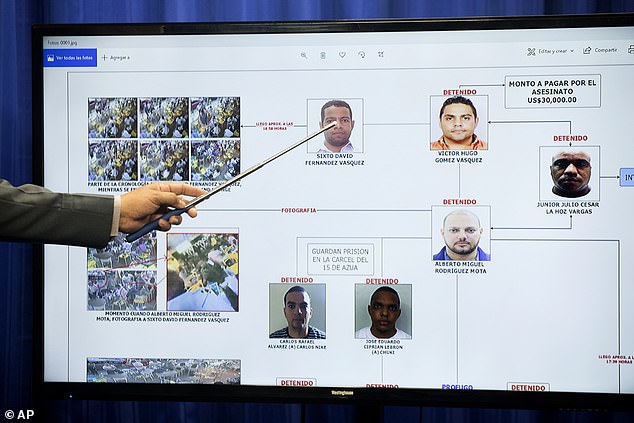 Victor Hugo Gomez Vasquez was allegedly trying to kill his cousin, Sixto David Fernandez, for snitching on Vasquez for a 2011 drug case 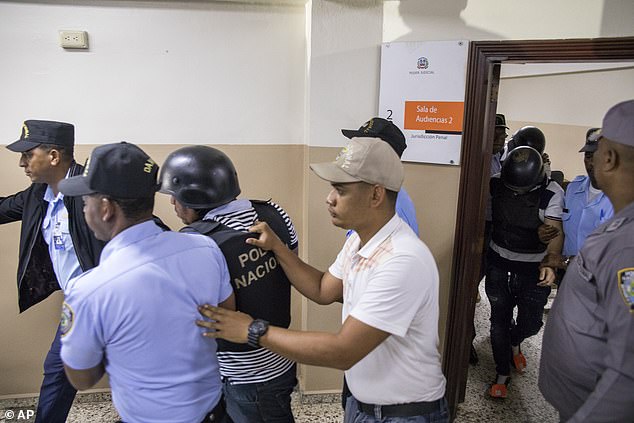 Fourteen suspects have been arrested for their alleged role in Ortiz’s attempted assassination, including Vasquez (right)