Australian cricket vice captain David Warner has made a statement ahead of his return to Sydney following the ball tampering scandal that has plagued the series against South Africa.

In the grovelling apology, shared as a picture to his Twitter account, Warner said he took responsibility for his part in the plot to cheat during the Third Test.

Opening batsman Cameron Bancroft was caught on camera rubbing sticky tape on the ball, and captain Steve Smith later admitted the move had been planned by the leadership of the national team. 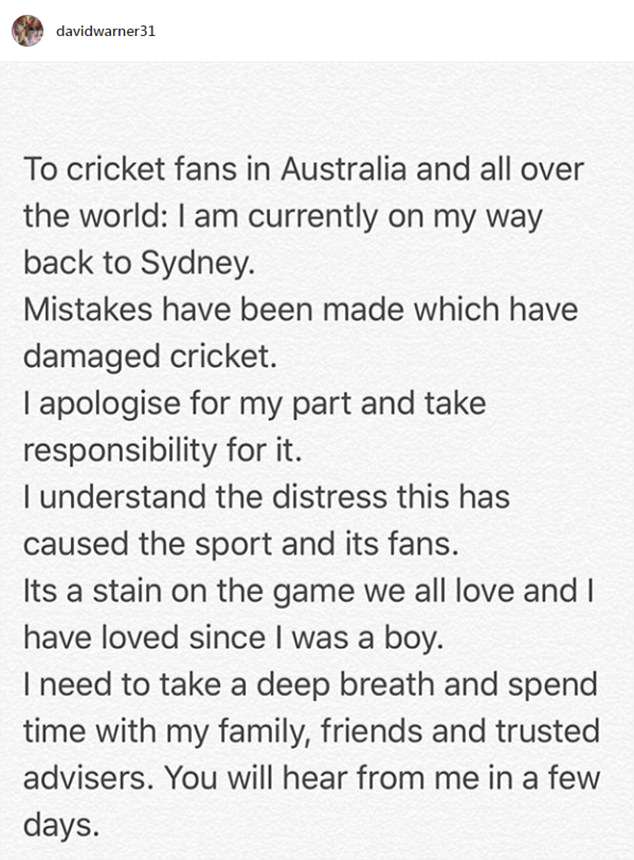 Pictured: Warner’s apology ahead of his return home from South Africa to Australia

While Smith addressed the media in his admission, Warner has not spoken about the scandal, his silence resulting in reports he had ‘gone rogue’.

But on Thursday afternoon, as he, Smith and Bancroft travel back to Australia in shame, he released an emotional statement:

Mistakes have been made which have damaged cricket.
I apologise for my part and take responsibility for it.
I understand the distress this has caused the sport and fans.
It’s a stain on the game we all love, and I have loved since I was a boy.
I need to take a deep breath and spend time with my family, friends and trusted advisers. You will hear from me in a few days.

Smith and Warner have both received 12-month bans from the game and lost their respective roles as captain and vice captain, while Bancroft will serve a nine-month suspension.

Cricket Australia confirmed Warner would never be again considered for a team leadership position, while Smith and Bancroft would need to prove themselves for 12 months following their suspensions to be promoted.

All three will need to complete 100 hours of service in community cricket, and are strongly encouraged to play club cricket. Cameron Bancroft (left) has been issued a nine-month suspension from the game, while former captain Steve Smith (right) has been given a 12-month ban

Warner was earlier criticised for what appeared to be his nonchalant reaction to the scandal which left Australia fuming.

Reports claimed the cricketer went to drink champagne with ‘non-cricket mates’ after the scandal broke and is said to have removed himself from the team’s WhatsApp group.

His behaviour left his teammates fuming, with rumours they had asked for Warner to be removed from their hotel in Cape Town.