David Warner has promised to reveal the full story behind the ball-tampering scandal which has destroyed his career.

The disgraced cricketer broke down in tears while apologising for his role in the plan to cheat during a test match against South Africa.

Warner refused to answer questions on who was responsible for the plot during a press conference at the Sydney Cricket Ground on Saturday, but took to Twitter to explain his silence.

‘I know there are unanswered questions and lots of them. I completely understand. In time I will do my best to answer them all. But there is a formal [Cricket Australia] process to follow,’ Warner wrote.

Warner refused to answer questions on who was responsible for the plot, but took to Twitter to explain his silence 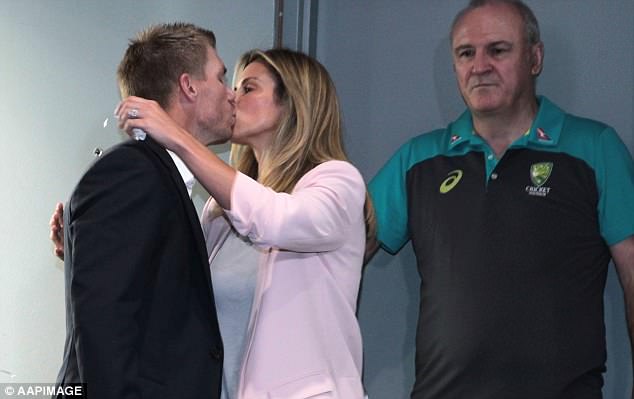 The cricketer spoke to media on Saturday, kissing his wife Candice before saying sorry for his role in the plot to cheat

‘I am taking advice to make sure I properly comply with that process and answer all questions in the proper place and at the proper time.

‘I should have mentioned that in my press conference I’m sorry for not making it clearer. With so much at stake for my family and cricket I have to follow this process properly. I think that’s fair.’

Warner, 31, hugged and kissed his wife Candice before saying sorry for the plot to cheat.

‘To the fans and the lovers of the game… I want to sincerely apologise for betraying your trust in me. I have let you down badly,’ he said, while holding back tears.

Warner refused to directly answer questions about who was privy to the plot as it was conceived.

A media manager interrupted journalists who attempted to press Warner further as to who came up with the plan, and who knew about it. 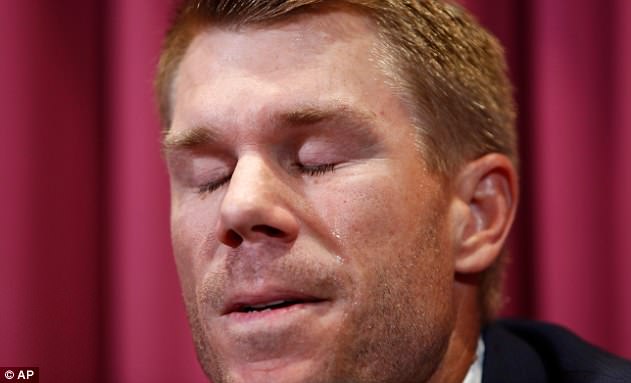 Warner also apologised to the South African team, and supported a review into the culture of the Australian side

‘I’m sorry for the impact those have had on our country’s reputation. I have made a decision which has had the opposite effect and is one that I will regret for as long as I live,’ Warner said.

‘It’s heartbreaking to know that I will not be taking the field with my teammates that I love and respect.’

Warner became emotional while discussing the impact the criticism of his behaviour has had on wife Candice and daughters Indi and Ivy.

Vice-captain Warner was banned for a year by Cricket Australia for his role in the ball tampering scandal.

Captain Steve Smith received the same punishment while rookie batsman Cameron Bancroft was suspended for nine months. Both Smith and Warner were also barred from ever holding leadership positions with the national team again.

A Cricket Australia investigation found Warner was the primary instigator of the plan to cheat by using sandpaper to change the condition of the ball in an attempt to generate reverse swing during a test match against South Africa in Cape Town. 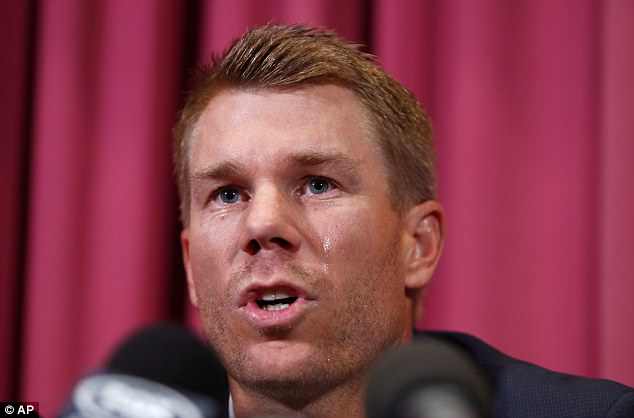 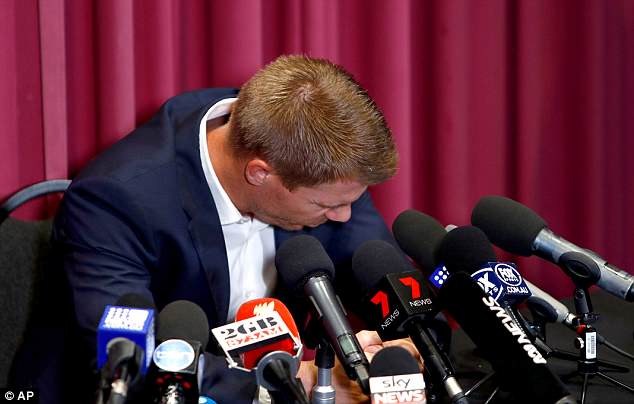 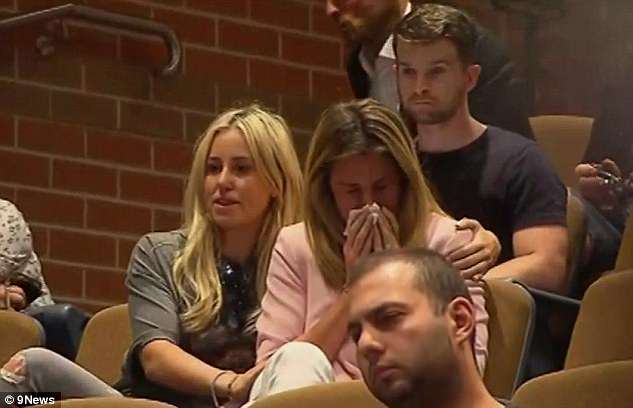 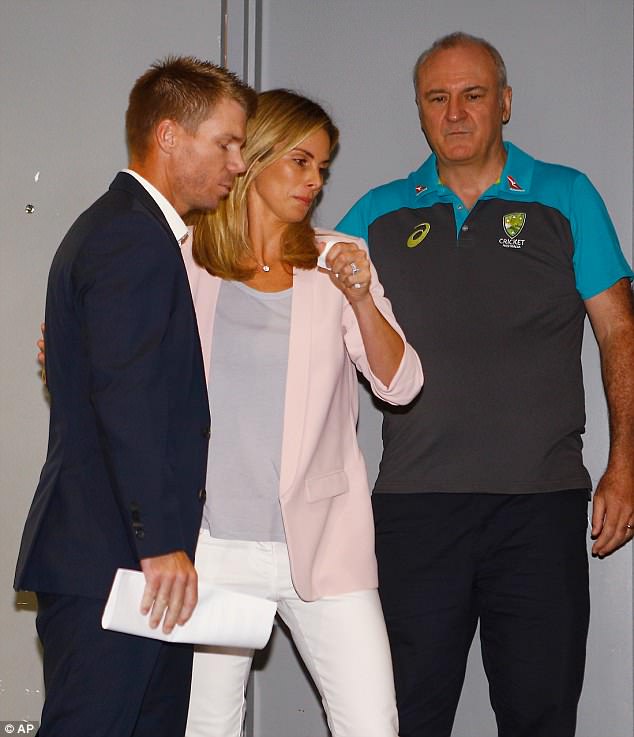 The cricketer said he hopes to represent Australia again.

‘In the back of my mind I suppose there is a tiny ray of hope that I may one day be given the privilege of playing for my country again – but I am resigned to the fact that that may never happen.

‘I can honestly say I’ve only ever wanted to bring glory to my country through playing cricket.’

Warner said it was ‘tough’ to talk about what was going through his mind when the plan was conceived, but alluded to the bitter nature of the series against South Africa. 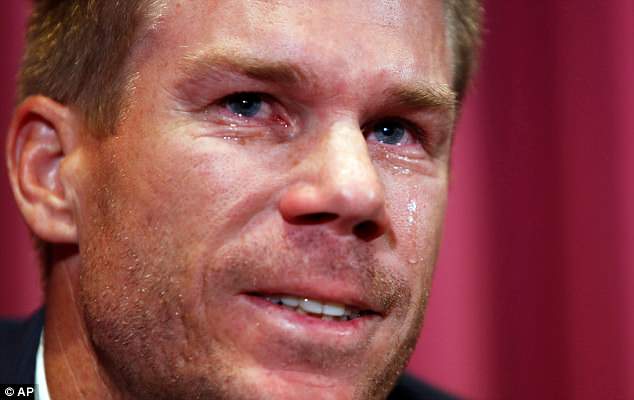 The cricketer first broke down in tears while talking about his family, and said he still holds out hope he may represent Australia again 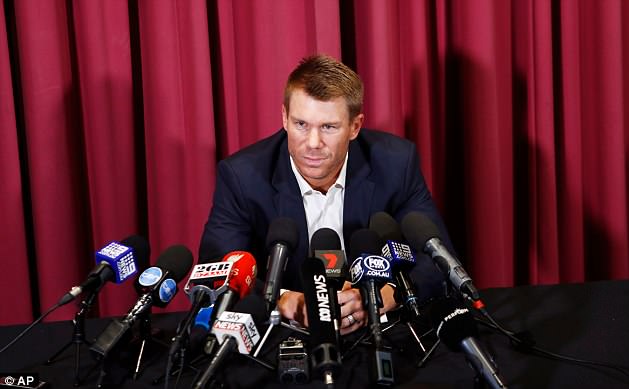 Warner said it was ‘tough’ to talk about what was going through his mind when the plan was conceived, but alluded to the bitter nature of the series against South Africa

Warner and South African player Quinton de Kock were involved in a number of heated clashes throughout the test series.

‘In the coming weeks and months I’m going to look at how this happened and who i am as a man,’ Warner said.

‘It’s inexcusable and I am deeply sorry.’

His wife Candice sat and watched the press conference, and was in tears throughout.

Warner also apologised to the South African team, and supported a review into the culture of the Australian side. 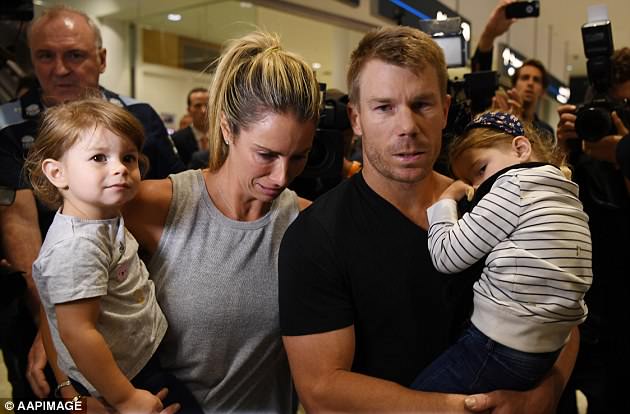 Upon arriving home from South Africa, Warner briefly fronted media alongside his tearful wife Candice and their children Ivy and Indi 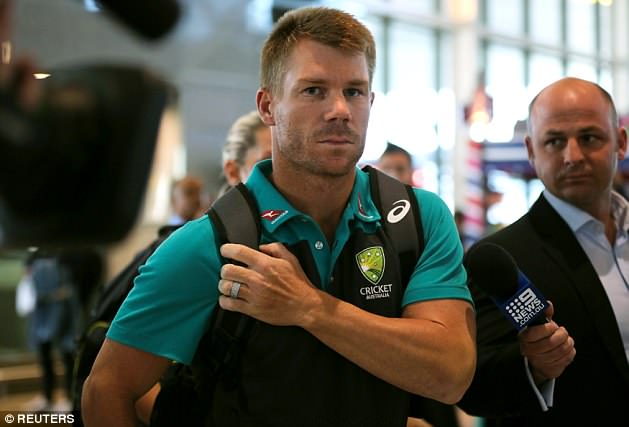 Warner also put out a statement on social media to apologise for his ‘part’ in the ball tampering scandal.

‘Mistakes have been made which have damaged cricket,’ he said.

‘I understand the distress this has caused the sport and its fans. It’s a stain on the game we all love and I have loved since I was a boy.

‘I need to take a deep breath and spend time with my family, friends and trusted advisers.’ 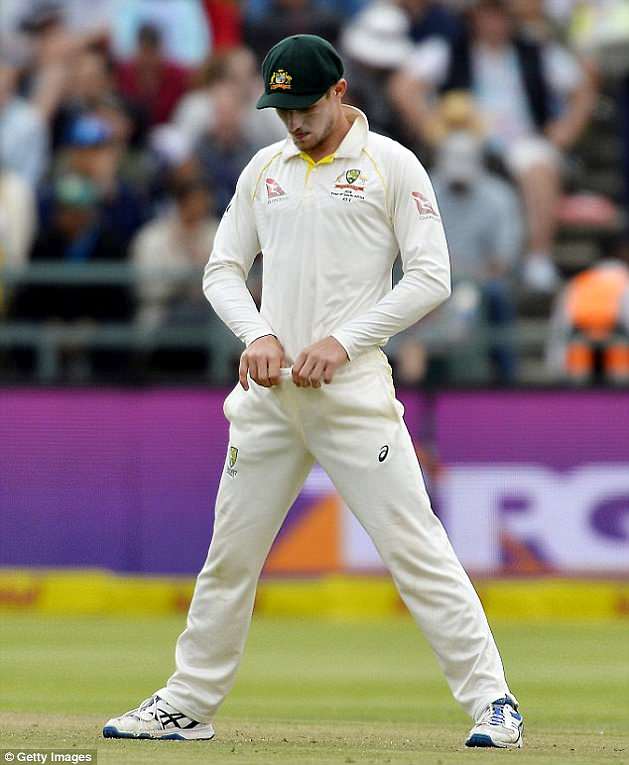 Cameron Bancroft used sandpaper to alter the condition of the ball 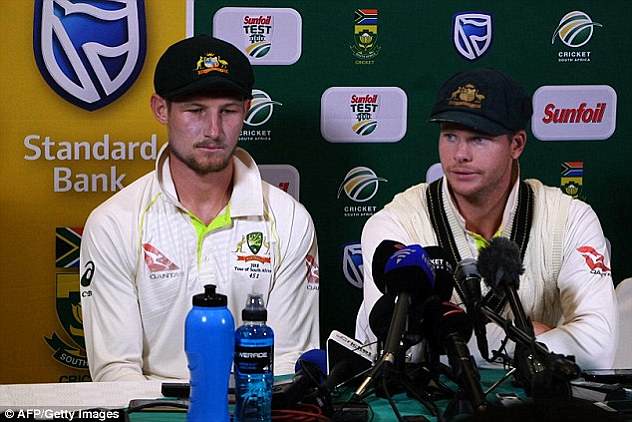