Davina McCall, 54, flaunts her incredible figure in a stylish red bikini as she dances by the sea

She’s recently made a documentary about the harsh realities of living with the menopause.

But Davina McCall, 54, looked on the bright side on Friday as she shared a fun clip with her 1.5m Instagram followers.

Dancing wildly in a skimpy red bikini the carefree television host revealed that one good thing about the condition is ‘you get an instant induction into the zero f***s club’.

Fit and fancy free: Davina McCall, 54, flaunted her incredible figure in a stylish red bikini as she danced by the sea in a Instagram post on Friday

The stylish crimson two piece contained a gorgeous Bardot neckline with frill detail at the sleeve.

While the high-cut bottoms clung to the star’s toned thighs, revealing her washboard abs as she danced around on the wooden decking.

Davina, who has been very open about her experience with the menopause, shielded her eyes from the scorching sun behind a pair of oversized sunglasses, as she showed off her youthful complexion.

The broadcaster slicked her wet chestnut locks back from her beautiful face as she accessorised the summer look with a simple gold cross necklace. 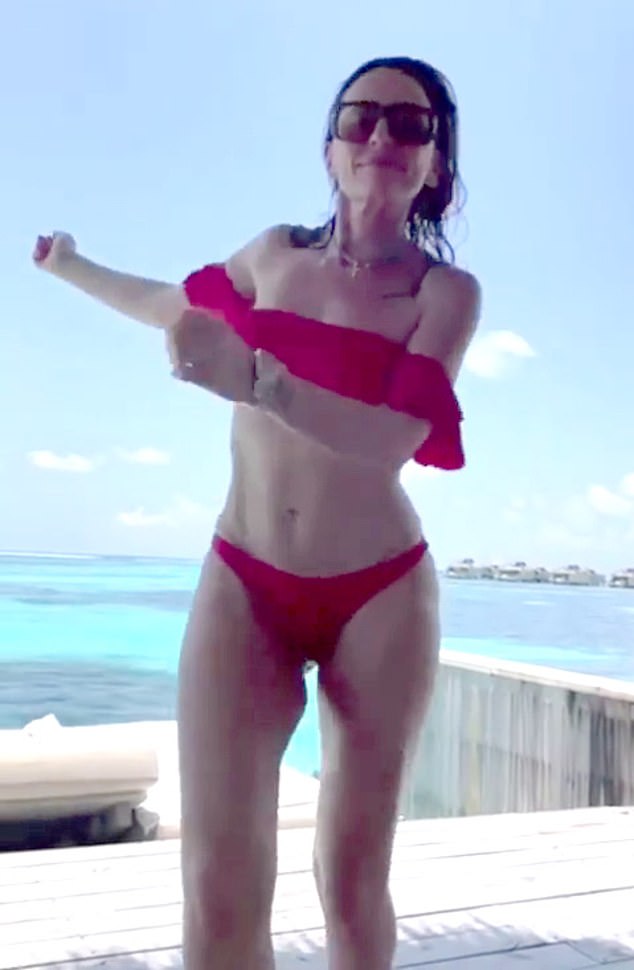 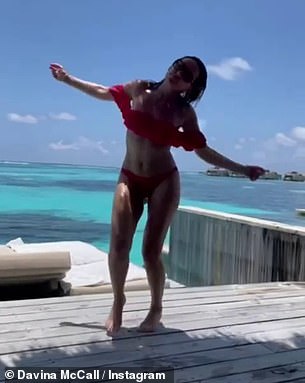 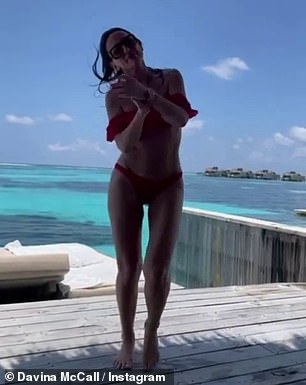 Dancing Queen: While the high-cut bottoms clung to the star’s toned thighs as she danced around on the beach decking

The former Big Brother host danced around to the music as she waved her arms in the air and hopped on each foot.

Before realising her boogie was being filmed and she walked towards the camera in fits of giggles.

She captioned the clip: ‘One good thing about Menopause is you get an instant induction into the zero f***s club, If you’ve run out of f***s to give this week , sending you so much love’.

Fans and famous friends were quick to gush over the star’s video as former Strictly Professional Oti Mabuse wrote: ‘hahahahahahahaha this song is me on set you look hot babeeee’. 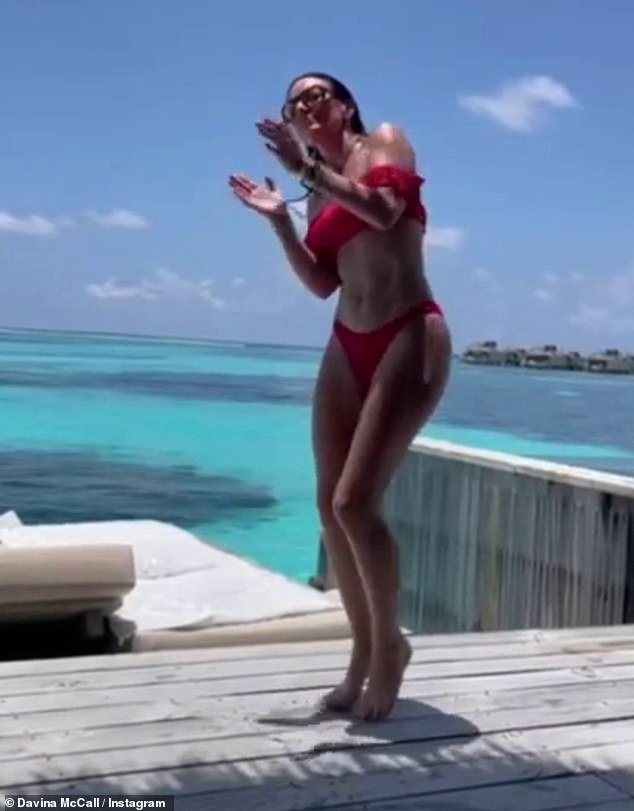 Beach bod: Davina slicked her wet chestnut locks back from her beautiful face as she accessorised the summer look with a simple gold cross necklace 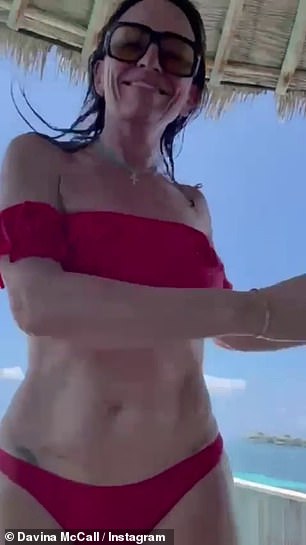 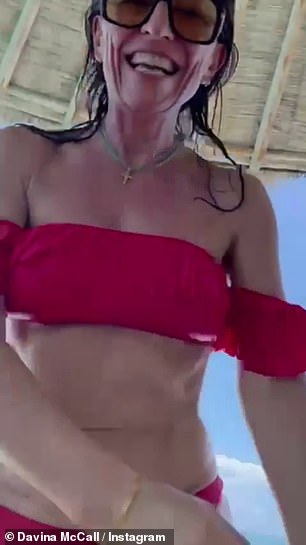 Boogie: The former Big Brother hot danced around to the music as she waved her arms in the air and hopped on each foot. Before realising her boogie was being filmed and she walked towards the camera in fits of giggles.

This comes after the brunette beauty recently opened up about how her severe menopause symptoms left her feeling like she had a ‘brain tumour or Alzheimer’s’ following a mistake on TV.

Speaking to Sophie Raworth on BBC One’s Sunday Morning, she said that her menopause ‘aged’ her and left her feeling ’embarrassed’ and ‘irrelevant’.

Davina, who recently penned a book on the matter, titled Menopausing, said the brain fog she experienced during peri-menopause led her to make a mistake in her job. 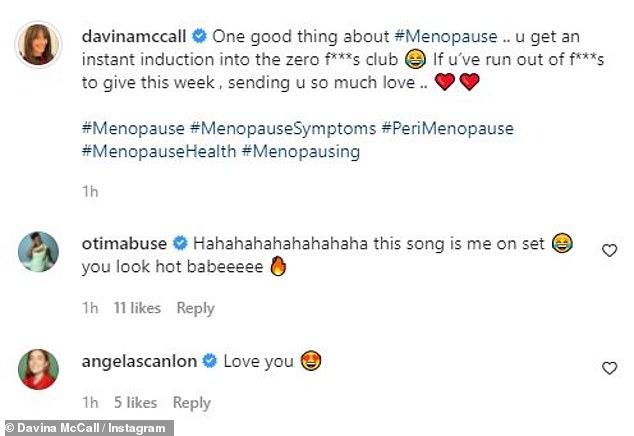 Pals: Fans and famous friends were quick to gush over Davina’s fun post including Oti Mabuse and Angela Scanlan

She revealed that during a particularly vulnerable moment, she burst into tears, thinking she was suffering from ‘a brain tumour or Alzheimer’s or something’.

‘During peri-menopause, the hormones go up and down and up and down, so you think you’re going completely mad,’ Davina said.

‘I felt it aged me, I felt it would make me irrelevant, I felt embarrassed because I’d always felt at the top of my game’.

‘I’d been in television at that point for 20 years, I really knew what I was doing, I was extremely proud of my kind of list-making and my logistical practicality and the fact that I could multitask,’ she said.

But Davina revealed her skills were hindered by menopause as she recalled making a mistake on TV. 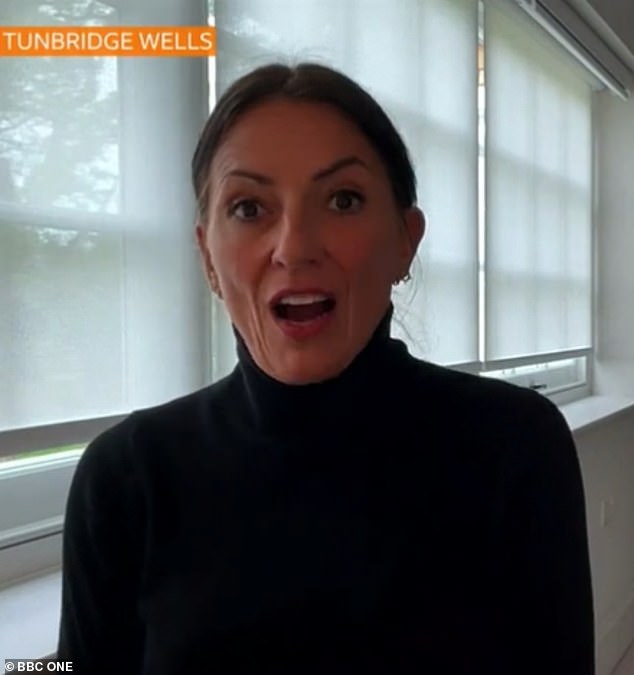 Struggle: Davina recently opened up about her severe menopause symptoms and how they made her fear she had a brain tumour or dementia

‘Somebody asked me if I was okay because I messed up on a TV programme, and I said yes, and when she shut the door and went away, I just burst into tears,’ she told Sophie.

‘Because I thought “I’m not okay, I think I got a brain tumour, or I got Alzheimer’s or something, help me”,’ the presenter added.

Writing for the Mail on Sunday today, Davina spoke more of her symptoms as she discussed the ongoing shortage of HRT – Hormone Replacement Therapy – which women use to manage their menopause symptoms.

‘I started with symptoms around ten years ago after suffering brain fog and anxiety to the extent I thought I was losing my mind,’ she said.

‘In my mid-40s, I was considered by my doctor to be too young to be menopausal, so I took the decision to consult a gynaecologist,’ she added. 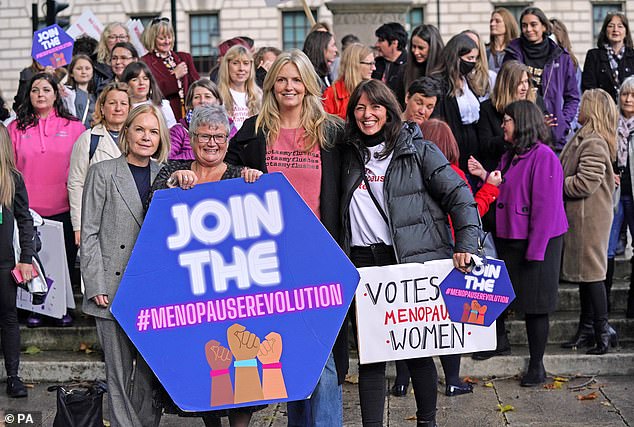 Alongside Penny Lancaster and Mariella Frostrup, and MP Carolyn Harris, Davina is campaigning to change the law around HRT prescription for women

Menopause is defined as the changes a woman goes through just before and after she stops her periods and is no longer able to get pregnant naturally.

Some women go through this time with few, if any, symptoms, around 60 percent experience symptoms resulting in behavioural changes and one in four will suffer severely.

In the UK, the average age for a woman to reach the menopause is 51, according to the NHS.