‘They look revolting because they’re on the mend!’ Davina McCall shares graphic photo of her mangled toes after falling while walking her dog… but insists she’s already healing

Davina McCall gave fans a trigger warning on Tuesday while sharing a picture of her mangled right foot, but insisted she was on the mend after picking up a suspected fracture.

The presenter, 53, was left with painful swelling around her ankle and heavy bruising across her toes after tripping on a root while walking her dog in November.

But she told Instagram followers the injury was already starting to heal little more than a week on from the mishap, with the bruises less distinct in an accompanying photo of the affected foot.

Terrible trotter: Davina McCall gave fans a trigger warning on Tuesday while sharing a picture of her mangled right foot, but insisted she was on the mend after picking up a suspected fracture

Addressing fans in a short video, she said: ‘Just warning you of a trigger alert because if you swipe left there is a picture of feet.

‘I know some people don’t massively like feet and these feet do look particularly revolting. They are mine, but they look revolting because they’re on the mend.’

Captioning the image, Davina – who has publicly challenged herself to cut sugar out of her diet, added: ‘I’m really sorry about the second pic x I know it’s gross . But look how much the swelling has gone down!!!!

Getting better: Davina told Instagram followers the injury was already starting to heal little more than a week on from the mishap 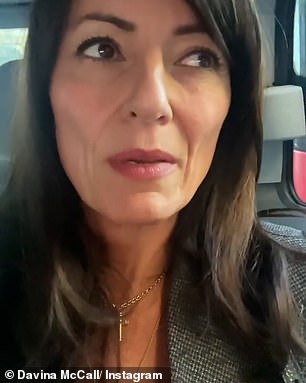 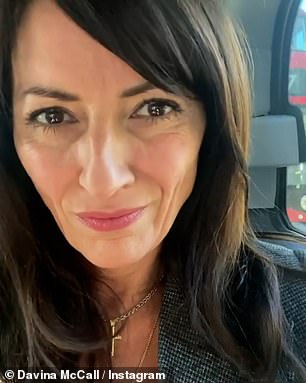 Watch out: But she was quick to warn fans about the graphic photo of her injured foot in a video shared alongside the image on Tuesday

‘I just have to be super careful I don’t do it again x it feels vulnerable x lots of physio . I was feeling pretty down about it yesterday, but today is a new day.

‘On a positive note , I’m 9 days sugar free, really feeling the benefit now… don’t worry if u fell of the wagon x jump back on with me any time u fancy.’ [sic]

Davina had previously updated followers on the injury shortly after it happened during a walk with her dog earlier this month.

Taking to Instagram, she said: ‘Hey, I thought I better give a bit of an explanation about my foot. I was out walking the dog yesterday, and I thought I’d run down the steps. I think I must have tripped on a root or something, and oh my god it hurts so much.

‘I sort of twisted my foot. Anyway I can’t flex it upwards, but I can do a bit of weight bearing. I think they think that it might be a tiny fracture or a chip off a tiny bone in my foot and some tendons and stuff.

‘So it’s gonna need some physio, no cast needed, and elevation and a bit of cold. You know, just take it a bit easy. No disco dancing for a couple of weeks.’