Davis vows Britain will be ‘independent’ after Brexit

David Davis is trying to damp down a blazing Tory revolt today by insisting Britain will regain its ‘independence’ after leaving the EU.

The Brexit Secretary will seek to cool tempers after Eurosceptic MPs made clear they are not ready to tolerate any more concessions to Brussels over a transition deal.

Theresa May is facing the rising threat of a leadership contest amid disquiet among Conservatives about her ‘timid’ approach and ‘dull’ policy platform.

Dozens of MPs are said to have sent letters to the powerful backbench 1922 Committee, with speculation that numbers are coming close to the 48 needed to trigger a full ballot.

Allies of the PM told MailOnline they believed she would fight on and win a vote of the parliamentary party – but a contest could still be devastating for her authority.

In a keynote speech today, Mr Davis will insist that Britain will be able to sign trade deals with other countries during the transition period after leaving the European Union in March 2019.

‘As an independent country, no longer a member of the European Union – the United Kingdom will once again have its own trading policy,’ he will say.

‘For the first time in more than 40 years, we will be able to step out and sign new trade deals with old friends, and new allies, around the globe.’

While the UK will replicate the effects of the EU customs union during the ‘implementation period’ this ‘should not preclude us from formally negotiating – or indeed signing – trade agreements’.

Any such deals would enter into force at the end of the implementation period. 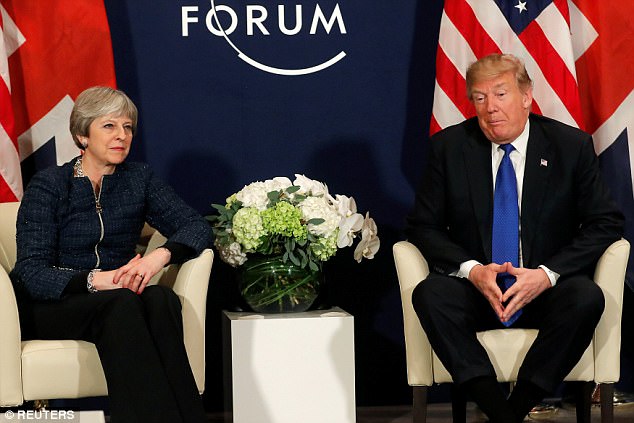 Mr Davis told MPs on Wednesday that he expected Brussels to resist the UK holding trade talks with other countries during the period because ‘there are people within the union who want to restrict any advantage for us’.

Downing Street rebuked Philip Hammond last night after he said he hoped Brexit would only result in the UK and EU moving ‘very modestly’ apart in trade terms.

The comments by the Chancellor at an event in Davos caused fury among Eurosceptics, who accuse him of fighting a rearguard action to soften Brexit. 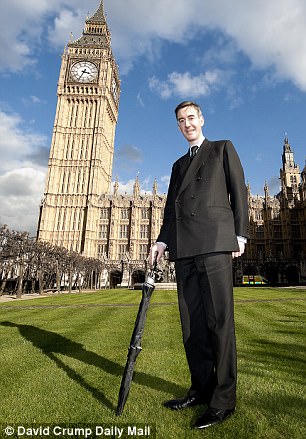 Prominent Eurosceptic Jacob Rees-Mogg (file photo) said it was now clear Brexit was ‘at risk’, as Cabinet Remainers, led by Mr Hammond, attempt to water it down beyond recognition

A Downing Street source said: ‘The Government’s policy is that we are leaving the single market and the customs union.

‘Whilst we want a deep and special economic partnership with the EU after we leave, these could not be described as very modest changes.’

In his own speech last night, Tory Brexiteer Jacob Rees-Mogg drew red lines on the shape of a transition deal.

He urged ministers not to be ‘timid and cowering’ in their approach to EU withdrawal.

He told BBC Radio 4’s Today programme: ‘Anyone who uses the word ‘timid’ about this Prime Minister is absolutely wrong.

‘This is the Prime Minister that gave us absolute clarity after the Brexit vote that we were going to get back control of our laws, our borders, our money – the most profound strategic decision any prime minister has to make in the current circumstances.’

Mr Hunt also played down the row over Mr Hammond’s intervention, saying the Chancellor was just making the point that the UK was well-place to negotiate a free trade deal which resulted in ‘very limited’ changes to its access to EU markets.

One senior supporter of Mrs May played down the prospects of a challenge. ‘The fundamentals have not changed. There is no better option,’ the MP said.

‘Even if there were to be a contest the chances are she would win it.’