New York Mayor Bill de Blasio says that the city hospitals only have enough supplies to last a week as the coronavirus cases in the city mount to over 30,000.

‘Sunday April 5 – we have enough supplies to get to a week from today, with the exception of ventilators,’ de Blasio gravely announced on Sunday.

While there are enough ventilators for now, the city will need ‘at least several hundred more’ after next week to make ends meet.

‘We’re going to need a reinforcement by next Sunday April 5 in all categories, especially ventilators, but in other areas as well and personnel is becoming more and more the issues,’ he said while speaking on CNN’s State of the Union.

De Blasio said he’s spoken with the president directly on the COVID-19 pandemic sweeping the nation where NYC has emerged as the epicenter of the outbreak in the US.

New York Mayor Bill de Blasio says that the city hospitals only have enough supplies to last a week as the coronavirus cases in the city mount to over 30,000 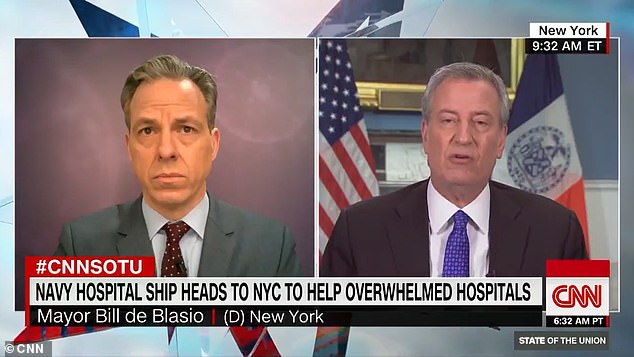 ‘We’re going to need a reinforcement by next Sunday April 5 in all categories, especially ventilators, but in other areas as well,’ he said while speaking on CNN’s State of the Union on Sunday to host Jake Tapper

NYC Mayor Bill de Blasio: “We have enough supplies to get to a week from today, with the exception of ventilators, we’re going to need at least several hundred more ventilators very quickly” #CNNSOTU pic.twitter.com/cCDpzIBWsA

‘I made a direct request to the president and to the military to find us immediately some more military medical personnel and get them here by next Sunday, but also to starting figuring out how to get civilian personnel from around the country here,’ he said.

And the Mayor warns the worst is yet to come – a far cry from his pleas with the public back in January to remain calm and continue life as usual.

‘We’re talking about a sharp escalation ahead. We’ve got almost 30,000 cases now over 500 deaths already, we’re over a quarter of the nation’s cases here in NYC and I can only guarantee you the next week,’ he said.

‘That’s how difficult and challenging it is. And our front-line health care workers are giving it their all they’re in harms way – we need to get them relief…They can’t keep up at this pace for weeks and weeks ahead…’

De Blasio told host Jake Tapper that the president and defense secretary have been  ‘very available and very responsive’ to his pleas for more supplies and manpower to battle the virus. 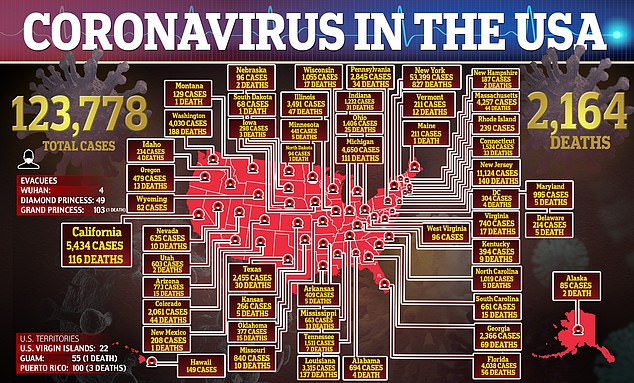 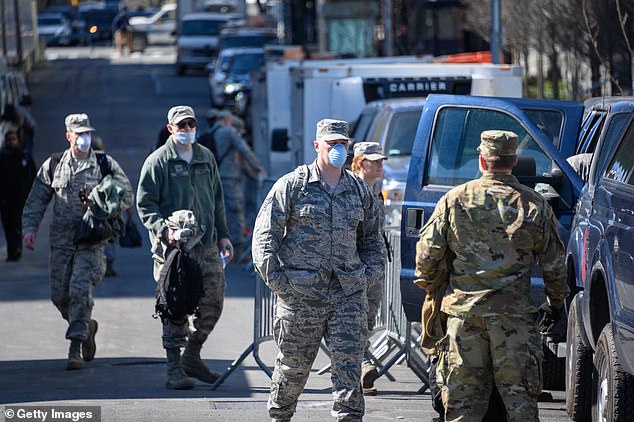 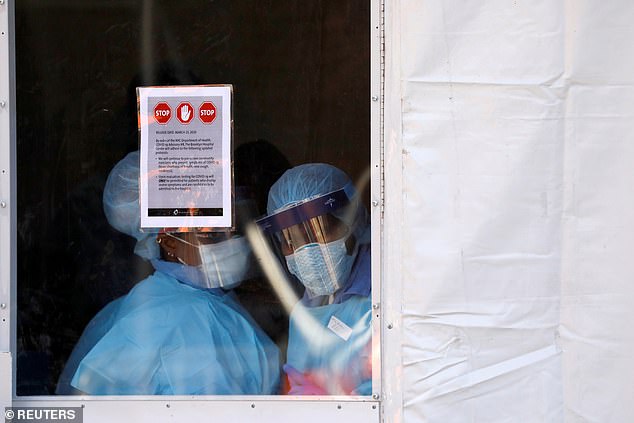 As of Sunday morning there are 30,765 cases of coronavirus in New York city itself and over 53,000 in the entire state of New York.

The crisis has led the entire state to church down, businesses to shutter, and locals to work from home and stay indoors.

COVID-19 testing centers and hospitals have been inundated with patients over the past month as the contagious respiratory infection proliferates among citizens.

During the Sunday interview host Jake Tapper confronted De Blasio on his delayed response to the crisis. 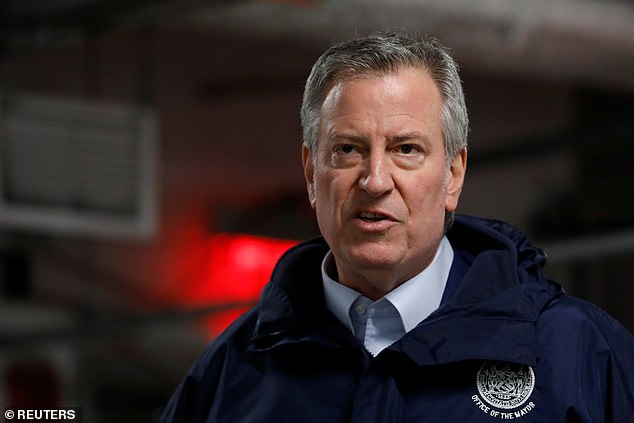 Host Jake Tapper called out the Mayor for his prior interviews, including one as recently as two weeks ago, where he urged New Yorkers to ‘go about their lives’

He aired De Blasio’s interviews from January, February and one from two weeks ago on March 13 – De Blasio said, ‘New Yorkers should go about their lives’.

‘In retrospect, is that message, at least in part, to blame for how rapidly the virus has spread across the city?’ Tapper asked.

‘Jake, we should not be focusing, in my view, on anything looking back on any level of government right now. This is just about how we save lives going forward. We all were working — everybody was working with the information we had and trying of course to avoid panic,’ the Mayor replied.

Tapper called out De Blasio for criticizing President Donald Trump for acting behind the curve and said ‘I mean, Mr. Mayor, weren’t your actions in this outbreak also far, far behind the curve?’

De Blasio doubled down in his self defense saying, ‘There’s no time to go back over that. There’s only time to focus on getting through the next week and the week after that.’

‘You could ask all the questions you want. They’re fair. But I think the time to deal with these questions is after this war is over, because literally here in New York City, it feels like a wartime environment.’