The Hampshire-based company, which also designs identity cards and bank cheques, is forecasting a £5million increase in operating costs as a result of surging commodity prices since the outbreak of the Ukraine war.

It has taken actions to minimise cost hikes, with £36million already saved through a turnaround plan begun two years ago, and has fixed energy supply costs until September 2024.

However, the firm warned that numerous headwinds since the start of the current financial year had created ‘a substantial degree of uncertainty in the outlook’.

As a result, De La Rue is forecasting adjusted operating profits for the 2023 fiscal year to be ‘broadly flat’ on the £36.4million it made in the 12 months to 26 March.

This figures was a 4.5 per cent drop on the same period the previous year, reflecting the conclusion of a UK passport production contract causing earnings in its identity solutions business to tumble by over 90 per cent.

The company incurred further charges related to the end of banknote production at its Gateshead factory and the economic crisis in Sri Lanka, where the devaluation of the country’s currency caused the group about £500,000 in exchange losses.

De La Rue shares had fallen 9.7 per cent to 100.2p by the late afternoon on Wednesday, making it the second biggest faller on the FTSE All-Share Index, behind mining giant BHP Group.

Nonetheless, operating profits in its two largest divisions – authentication and currency – jumped by 44.2 per cent and 20.4 per cent, respectively. 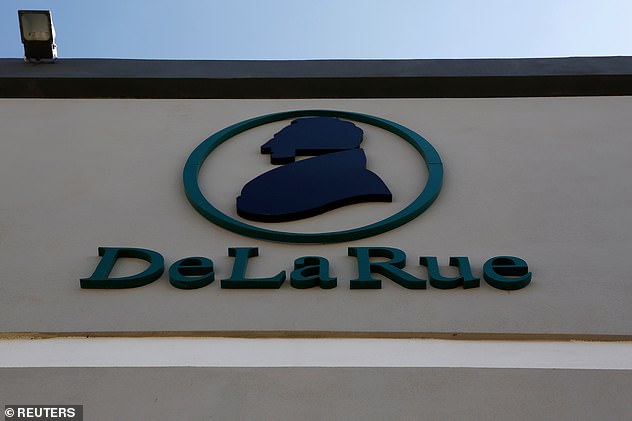 Chief executive Clive Vacher said this was achieved ‘against the background of supply chain inflation, and the various impacts of Covid-19, none of which were anticipated in the original turnaround plan of February 2020’.

This transformation strategy includes boosting its bank notes business in response to the growing popularity of polymer notes among central banks, and enhancing its offering of security features.

Vacher added: ‘We have made significant further progress in the execution of our operational transformation, enhanced our market positions in both divisions, and driven further efficiency improvements across the group.’

The firm’s authentication business saw revenues rise to £90.3million as it benefited from a full year of contracts to provide digital tax stamps to the Ghana Revenue Authority and track and trace technology to HM Revenue & Customs (HMRC).

It also won another five contracts to supply tax stamps and solutions, including a five-year deal with the Oman Tax Authority in February, and experienced strong demand from the pharmaceutical, IT and vaping industries.

However, its currency division saw a modest fall in revenues because of weaker-than-expected demand for banknotes and production problems at its manufacturing facilities in the UK and Malta.

During December and January, a higher than average number of the company’s staff isolated after contracting the more contagious Omicron variant of Covid-19.

Although De La Rue has observed absence levels declining to more ‘manageable levels’ since that time, it said that they remain higher when compared to pre-pandemic volumes.