People are more than eight times as likely to catch an infection while in hospital as they were 10 years ago, figures show.

The current figure breaks down to more than 4,000 infections each month – more than 1,000 every week.

The figures come as experts have warned it is becoming increasingly difficult to cure once-routine infections because they’re resisting antibiotic treatment.

Experts warn people are dying from common infections and medicine could return ‘to the dark ages’ if antibiotics stop working.

Figures from NHS Digital show the number of infections caught in NHS hospitals has gone up by an average of 80 per cent every year since 2008.

They are measured in NHS Digital admissions data as nosocomial infections – meaning those which are acquired in hospital.

MRSA – short for meticillin-resistant Staphylococcus aureus – is one common hospital infection which can be harmful for people who are already ill or weak.

The infection has become resistant to the standard antibiotics which used to treat it, like penicillin, and other bacteria, viruses and fungi are also getting stronger.

‘Sooner or later we won’t be able to treat anything,’ said Derek Butler, chair of MRSA Action UK. ‘These infections shouldn’t be happening.

‘The message I’d give ministers is, “If you think this battle is over, it’s not.” We have a bigger threat now than before because the bacteria have become more resistant to antibiotics.’ 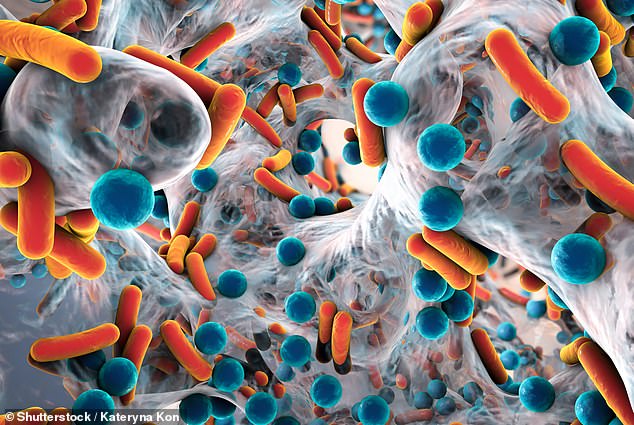 The number of infections caught in hospital has shot up from 5,972 in 2008 to 48,815 in 2017 at the same time experts are warning of a rise in infections which do not respond to antibiotics

HOW MANY HOSPITAL-ACQUIRED BUGS HAVE THERE BEEN IN THE PAST DECADE?

These infections often enter the body through the open wounds, meaning routine surgery could become dangerous by increasing the risk of people catching the illnesses.

Dame Sally Davies, chief medical officer for England said earlier this week: ‘Without swift action to reduce infections, we are at risk of putting medicine back in the dark ages.

‘Common procedures we take for granted could become too dangerous to perform and treatable conditions become life-threatening.

‘The UK has made great efforts in recent years to reduce prescribing rates of antibiotics.

‘However, there continues to be a real need to preserve the drugs we have so that they remain effective for those who really need them and prevent infections emerging in the first place.’

Rachel Power, chief executive of the charity, Patients Association added: ‘Behind these figures will be deeply distressing ­experiences for many people.

‘It is crucial there is a full explanation for why this increase has taken place and action taken by hospitals to investigate.’

The World Health Organization (WHO) has previously warned if nothing is done the world is heading for a ‘post-antibiotic’ era.

Figures estimate that superbugs will kill 10 million people each year by 2050, with patients succumbing to once harmless bugs.

In September, the WHO warned antibiotics are ‘running out’ as a report found a ‘serious lack’ of new drugs in the development pipeline.

Without antibiotics, C-sections, cancer treatments and hip replacements will become incredibly ‘risky’, it was said at the time.