What are nerve agents?

Nerve agents are a group of human-made substances that target a certain part of the body’s nervous system.

Chemical weapons that use nerve agents like tabun, sarin and VX are known to kill people with gruesome efficiency.

Just 10mg of VX, for instance, can kill a human in just 10 minutes.  A smaller dose can take up to an hour to be lethal.

Any nerve agent can affect a person through the skin, breathing, ingestion, or all three routes, depending on the substance and how it’s used.

Special bombs can weaponise the agents as a liquid, firing them out as a breathable gas.

A nerve agent attack causes a disconnect between the brain and organs, causing your lungs to begin shutting down and triggering uncontrollable vomiting, diarrhoea, and frothing at the mouth. Pictured is a victim of a nerve agent attack in Damascus in 2013

What effect does it have on the body?

One of the most terrifying things about nerve agents is that you may never see, hear or smell them coming.

The first thing that will happen to you is your mucous membranes will go into overdrive.

This means your mouth will create more saliva, you’ll begin drooling, your eyes will begin to water and your nose will run. You’re likely to start foaming at the mouth.

Your pupils will then become pin pricks and won’t react to light. You may lose your vision entirely, or at the very least it will go blurry.

There will quickly be a major disconnect between your brain and your body. You won’t be able to move and may become paralysed.

You’ll find it hard to breathe and you are likely to vomit violently and begin to sweat all over.

You’ll have seizures, uncontrollable bowel movements, an erratic heart rate and excruciating pain all over.

This is because the chemicals lock the enzyme acetylcholinesterase, which breaks down a key messenger signal in our muscles that tells them to stop contracting.

This means the body’s muscles cannot relax, causing convulsions  and death by asphyxiation due to a loss of control of the respiratory muscles.

The messenger chemical, known as acetylcholine, also builds up in the brain causing it to rapidly shut down.

At high enough doses a nerve agent can kill within 10 minutes. 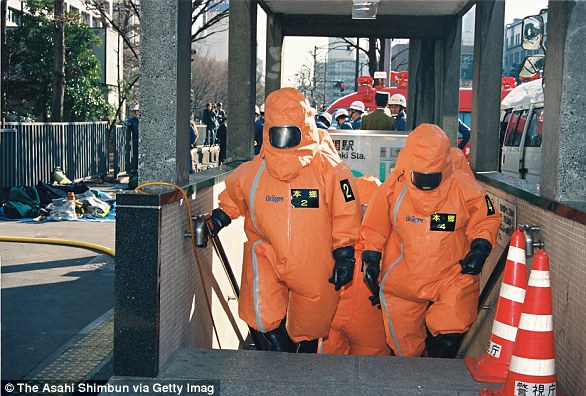 What is the antidote?

Nerve agents are damaging to the human body because they cause a build-up of acetylcholine.

This causes constant triggering of the neurons and therefore, constant contraction of muscles.

These spasms can be treated with antidotes that shut-off acetylcholine receptors in the brain.

Usually, two antidotes (atropine and pralidoxime chloride) are used which interfere with the acetylcholine binding to the neuron receptors.

These antidotes work in the exact opposite way of anti-depressants which encourage the uptake of neurotransmitters through the synapse.

Chemicals like Prozac encourage neurons responsible for feelings of happiness (such as dopamine and serotonin) to be transmitted through these receptors.

To work, these drugs must be administered immediately – within minutes of exposure.

What happens if you are exposed to a nerve agent but don’t die?

People who have been exposed to very small levels may not die, but they will suffer life-long problems.

Many of these problems can persist for decades.

Even at small doses, it is possible to suffer permanent severe nerve or brain damage. However, the exact long-term effects of nerve agents remain uncertain.