A fatal so-called ‘zombie’ disease swiftly spreading in the United States and Canada among deer, elk and moose might put humans at risk if they eat diseased venison.

Chronic wasting disease causes elk and deer to stop eating and behave in confused ways as their brains are turned into sponges by abnormal proteins.

The slowly incubating disease, which leaves microscopic holes in an animal’s brain, is caused by prions.

They are the same rogue proteins that caused bovine spongiform encephalopathy, or mad cow disease, in Britain in the 1980s.

About 200 people in the Britain and Europe died of prion-based Creutzfeldt-Jakob disease about 10 years after eating infected beef.

Today, about one in 2,000 people in Britain harbour inactive prions in their bodies, but have not yet shown symptoms, scientists say.

So far, there is no evidence that chronic wasting disease can cross species from deer to humans.

But abnormal prion diseases can take years to show up and prions are known to mutate into new forms, a new call-to-action opinion paper suggests.

A fatal so-called ‘zombie’ disease swiftly spreading in the United States and Canada among deer, elk and moose might put humans at risk if they eat diseased venison

The doctors made their case in ‘Chronic Wasting Disease in Cervids: Implications for Prion Transmission to Humans and Other Animal Species’ published in July.

‘It is probable that human cases associated with the consumption of contaminated meat will be documented in the years ahead,’ Dr Osterholm, of the Center for Infectious Disease Research and Policy, told the Minnesota legislature in February.

‘It is possible that a number of human cases will be substantial and will not be isolated events,’ he told UPI.

‘We have historic perspective of mad cow disease, where the incubation period is likely 10 years or more.’

Between 7,000 and 15,000 animals infected with the disease are consumed every year by humans, according to the Alliance for Public Wildlife, authors of the microbiology opinion paper say.

Chronic wasting disease first was detected in 1967 in a captive deer in a research facility at Colorado State University in Fort Collins.

The disease soon spread to other captive deer and then wild populations of animals in the cervid family – mule and white tail deer, elk and moose. 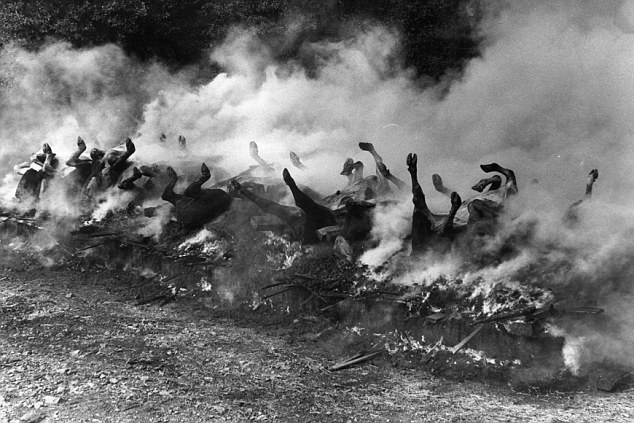 Chronic wasting disease causes elk and deer to stop eating and behave in confused ways as their brains are turned into sponges by abnormal proteins. Pictured: Cattle are burned at Lean Quarry near Liskeard, Cornwall, in 1988 as part of the slaughter policy to stop BSE

Since 2000, chronic wasting disease has spread to 26 states and Canadian provinces, with the highest concentration of US cases in Colorado and Wyoming and the border between Wisconsin and Illinois.

The disease has also spread to South Korea through the importing of captive elk, and to reindeer in Norway, Finland and Sweden.

Symptoms of the disease in the animals include emaciation, stumbling, drooling, droopy ears and head and lack of fear of people.

They also spread when hunters field dress an infected animal and leave the guts behind.

Misshapen prions have been found in dirt and on plants and can last for years. They cannot be destroyed by cooking at high heat or by being treated with disinfectant.

‘Dazed, confused, skinny with a blank stare and wobbly,’ was how Wendy White described the elk buck that stared intensely into her windows, barely moving for days near her Colorado foothills home.

It climbed onto her deck, ‘seemed to be staring at me through the windows asking me to do something with its glazed-over eyes.’

A ranger from the Colorado Parks and Wildlife came and shot the animal, which tested positive for wasting disease.

Some herds in northern Colorado and southern Wisconsin now have between 40 and 50 percent of animals infected, wildlife experts say.

Hunters often shoot healthy-looking deer that can have the early stages of the disease, scientists say.

State natural resource agencies have uneven surveillance for the disease and many don’t offer a test for chronic wasting disease.

For states that do offer to test for the disease, the results can take weeks, during which time a hunter may have already consumed the meat, or taken a carcass to be processed or taxidermied.

The new opinion paper calls for the development of a ‘field-test’ for prions that can immediately determine if the disease is present.

More sensitive test technology and thorough testing might show a larger spread of the disease, and lead to more culled animals, said Mark Zabel, co-author of the opinion paper and associate director of the Prion Research Center at Colorado State University.

That could cause an economic hit for the U.S. hunting industry, but so could ‘cervid populations crashing because of disease,’ Dr Zabel said.

‘If we don’t get out ahead of this, there won’t be a hunting industry.’ 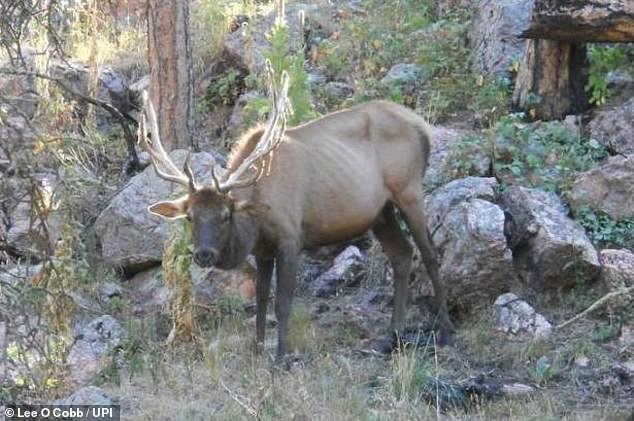 The slowly incubating disease, which leaves microscopic holes in an animal’s brain, is caused by prions.

Prions can contaminate steel cutting and processing equipment. Human prion diseases have been spread in the past through contaminated surgical instruments.

‘Consumer safety is our number one concern and no matter how small the risk (if any) of humans being infected by this disease we are not and never will be willing to put profit before the safety and well being of our customers,’ the company posted on its website.

Because different state wildlife agencies have different methods for dealing with and recording chronic wasting disease, the United States Geological Survey has kept track since the 2000s of incidents in North America with an updated map that shows the footprint of the disease.

‘Human exposure is definitely increasing over time, with an increasing prevalence in herds where CWD has been established the longest.

‘The risk is that as those prions are passed serially from deer to deer – after many generations they might be more likely to cross to a human form of the disease,’ he said.

‘Science suggests the risk is not static and may change over time.’

There is no cure for Creutzfeldt-Jakob disease, and it is often diagnosed after death via pathology testing.

Mad cow disease in Britain was traced to farmers in the mid-1980s who fed their cattle infected protein from the offal of other cattle.

Another malformed-prion disease, scrapie, has infected the brains of sheep and goats for hundreds of years without crossing over to humans.

Because farmers and scientists at the time believed that mad cow disease could not cross into humans, about 750,000 cattle infected with bovine spongiform encephalopathy entered the human food supply, the new opinion paper said.

The delay in eradicating these infected cattle put the population at risk, the scientists said.

Some US hunters still choose to take the risk and eat meat from animals with chronic wasting disease.

The Wisconsin Department of Health Services has a list of 1,000 Wisconsin residents who have eaten meat from animals that tested positive and agreed to participate in a long-term disease surveillance program, study coordinators said.

Even if chronic wasting disease does not spread to humans or livestock, it is still a wildlife epidemic, Dr Osterholm said.

Hunters are absolutely necessary to help keep the problem at bay, he said.

In the United States, hunters killed about 5.6 million white tail deer in 2017, according to the Quality Deer Management Association.

‘Hunters are a valuable part of herd management of these cervids to help reduce more animal contact that could spread chronic wasting disease,’ Dr Osterholm said.

‘We have every reason to support hunting, we just want to make sure the animals that are killed are safe to eat.’

The full findings were published in the journal of the American Society of Microbiology.