Deaf-blind Medical student, 25, who refuses to let her disabilities stop her becoming an NHS doctor

On her first day working on the ward, a doctor asked Alexandra Adams why she was walking around with a patient’s cane.

After explaining it was actually hers, the deaf and blind medical student was told not to touch any patients – then sent home.

Now in her fourth year at university, Miss Adams, 25, has refused to let her disabilities hold her back from becoming a doctor.

‘It has always been that if someone told me I couldn’t do something, I would go out of my way to prove I could,’ she said. ‘I can do cannulation, take blood, catheterise [and] spot rashes.’

Born deaf in both ears, and with vision of less than 5 per cent in her left eye and none in her right, Miss Adams has a Bluetooth stethoscope connected to her hearing aids. 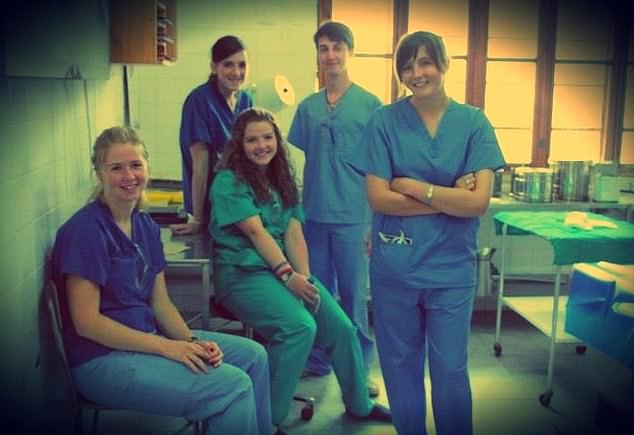 She relies on touch to feel for veins, adding: ‘You can pick up a lot about patients just by listening to them. Patient safety is paramount so if I’m doubting something, or I’m unsure, I always ask someone.’

Miss Adams had been due to represent GB as a swimmer at the 2012 Paralympics, but was hospitalised aged 16 with acid reflux.

She told The Sunday Times that stomach surgery went ‘very wrong’, forcing her to have more than 20 operations and stay in hospital for 18 months.

The experience saw her switch her focus from swimming to medicine – and she duly enrolled to study the subject at Cardiff University.

She says being a patient taught her the value of empathy. ‘I’ve been able to go up to patients who’ve been terrified, and I just draw the curtains and say, ‘I know how you feel’. 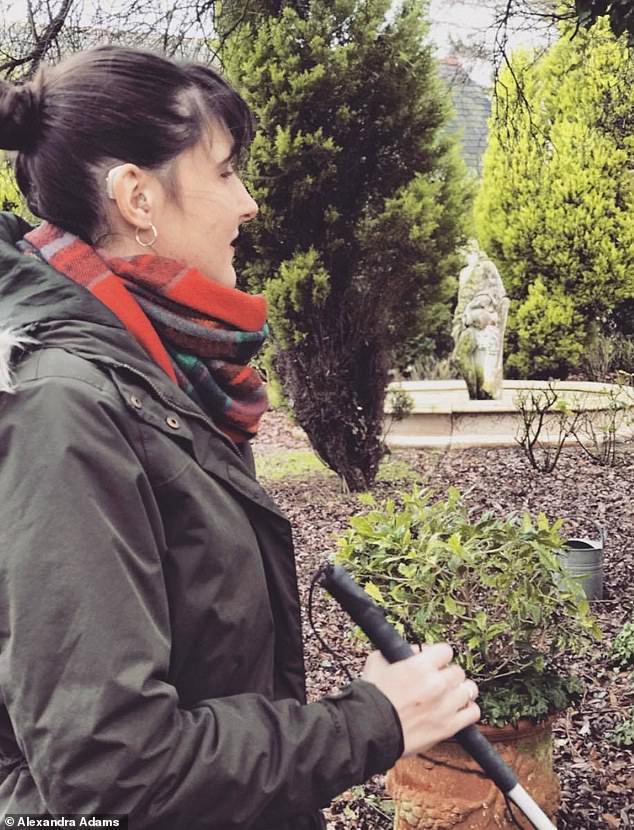 Miss Adams is deaf in both ears, completely blind in her right eye and only five per cent vision in her left

‘I have less eyesight than most, but more insight than many. That insight and empathy is the most important thing you can give patients.’

Writing about her first placement for the British Medical Journal, she said: ‘When I arrived a doctor asked what I was doing with the patient’s cane.

‘I had to point out, apologetically, that it was mine. I was told in front of my colleagues, staff on the ward, and the patients that I was not allowed to touch any of the patients – I felt disgusting.’

A doctor told Miss Adams she couldn’t look at X-rays, adding: ‘Imagine you’re a patient. Would you want a disabled doctor treating you? Absolutely not!’ 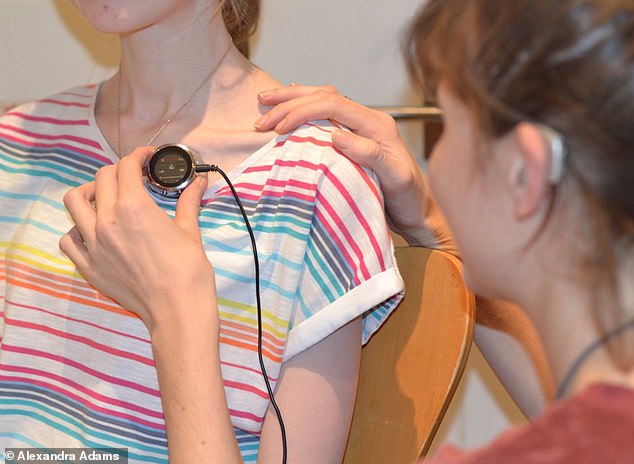 Despite the adversity Miss Adams faces, she like reminds herself:  ‘I have less eyesight than most, but more insight than many.’

Miss Adams said: ‘That first day I had experienced workplace discrimination – and I wasn’t even a qualified doctor yet.’

The student, originally from Kent, has opted to work in palliative care rather than surgery as she finds some tasks difficult to perform. She is currently working with older patients, with her folding cane proving to be a popular conversation topic.

Miss Adams described the reaction from the patients as ‘wonderful’, adding: ‘They don’t discriminate.’

She has met other disabled medics in America, including five blind doctors, and documents diversity in her blog Faces of the NHS.

Despite limited vision, Miss Adams takes portraits of workers around the UK and includes their stories, too.

On Friday, Miss Adams will give a talk about her life at the O2 in Greenwich, London. Her Cardiff tutor, Dr Jeff Allen, said it was ‘fantastic how Alexandra has applied herself’, adding: ‘She has shown she has the potential to be a good doctor.

She faces additional challenges, but there are other students I have more concerns over.’

NHS England chief executive Simon Stevens said: ‘Alexandra is an extraordinary young woman who defied the odds through sheer hard work and determination. I hope her example will inspire thousands.’