A deaf mother is suing Little Mix’s promoter after they failed to provide a sign language interpreter for their support acts.

Sally Reynolds bought six tickets to see the band at the South of England Event Centre in Sussex and brought along her two deaf friends and their daughters, including her eight-year-old Cate, who can hear.

Before the gig, on September 1, Ms Reynolds got in touch with organisers LHG Live and asked them to provide an interpreter. 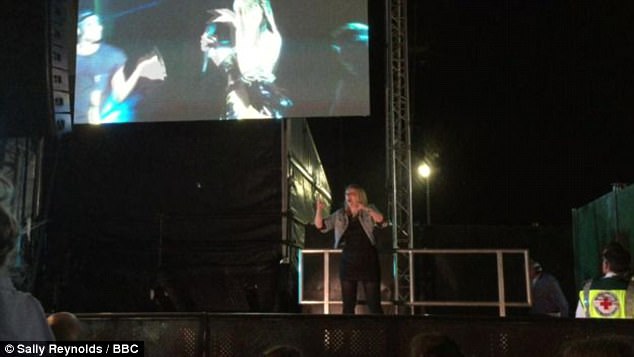 Sally Reynolds asked for an interpreter to be provided for the support acts but was left disappointed. Pictured: The interpreter during the Little Mix performance

But the company initially offered her carer tickets and said she could bring her own interpreter, according to the BBC.

Ms Reynolds did not believe this amounted to full access and under the Equality Act 2010 companies are required to ensure disabled people have access to an experience as close as possible to that of a person without a disability.

Ms Reynolds believes the firm fell short and said: ‘We asked two or three times, please can you provide the interpreter for us, and the explanation we got back was just a ‘no’.

‘It didn’t have any reason behind it and eventually we became so frustrated.

‘I wanted to share the same experience my daughter had – essentially I just wanted access to the songs.’

Despite Ms Reynolds pleas, with days to go to the concert there was no interpreter in place so she launched legal action, instructing lawyers to apply for an injunction forcing LHG Live to provide a British Sign Language interpreter. 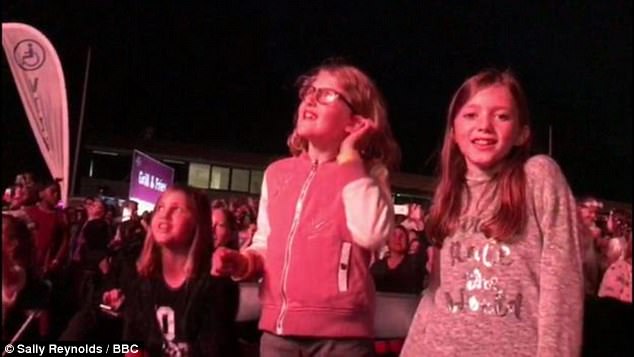 Sally Reynolds brought her friends, who are also deaf, and their daughters, who are able to hear

LHG Live agreed in the hours before the hearing was set to take place – but the interpreter had not been booked for the two supporting acts.

Ms Reynolds has argued this meant their experience was inferior to everyone else’s and is now pursuing legal action against the firm for failing to make reasonable adjustments by not providing an interpreter for the entire concert.

An LHG Live spokesman said the support acts were not confirmed until 10 days before the concert, leaving an insufficient and unreasonable amount of time for the interpreter to learn the lyrics.

A spokesman for the band told the BBC Little Mix believe their shows should be inclusive for all.