The death-defying moment a daredevil speeds down a 9,340ft-tall snow-capped volcano at 62mph in a KAYAK (then lands in a river before descending a waterfall)

Heart-pounding video footage shows the death-defying moment a daredevil kayaker descends a snow-capped volcano at 62mph (100kmph) before hurtling through a forest and down a waterfall.

Red Bull athlete Aniol Serrasolses can be seen on top of Villarrica, one of Chile’s most active volcanoes, enjoying the stunning view from the 9,340-ft peak. After soaking up the scenery, he gets into his kayak to make the 15.5-mile (25-kilometre) descent.

As soon as the 29-year-old Spaniard tips over the edge, he’s gone like a shot with only his paddle to keep him from veering off course.

Daredevil kayaker Aniol Serrasolses at the top of Villarrica, one of Chile’s most active volcanoes, before starting his stunt 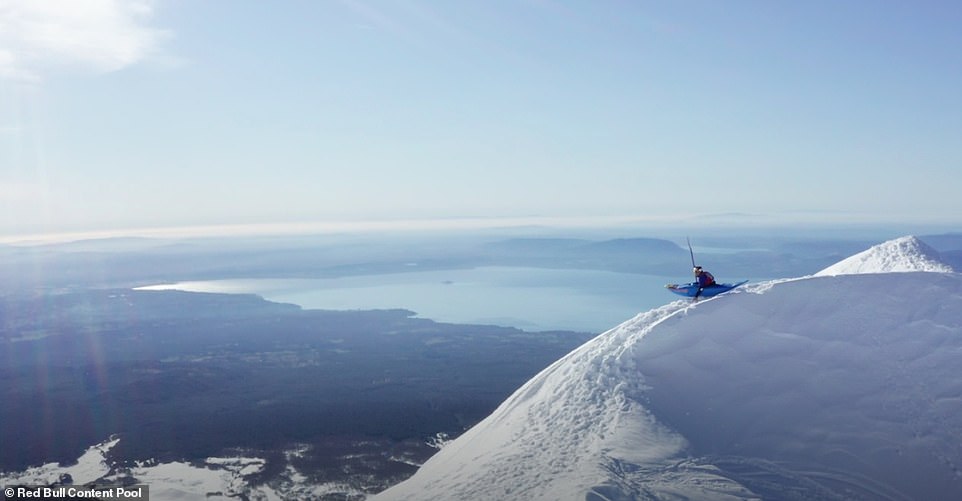 After soaking up the scenery, Serrasolses gets into his kayak to make the 15.5-mile (25-kilometre) descent down the volcano

At certain points, he flies through the air as he whizzes off ledges of snow. He then thuds back down on compact snow and continues rocketing along.

After navigating a good run of snow and rock he enters a wooded area, with trees and other pieces of undergrowth proving to be quite the obstacle course. Despite the web of foliage, he avoids a collision.

Eventually, Serrasolses reaches a fast-flowing river, which he seamlessly navigates to a gaping waterfall.

When he reaches the drop, he goes on to perform a mind-boggling flip in freefall. 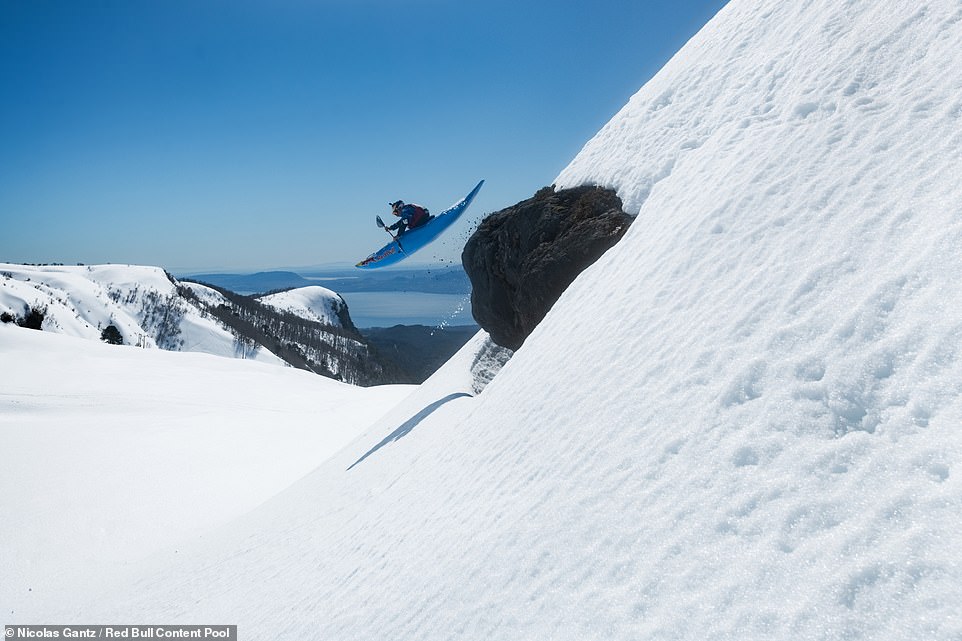 As soon as the Spaniard tips over the edge of the volcano, he’s gone like a shot with only his paddle to keep him from veering off course 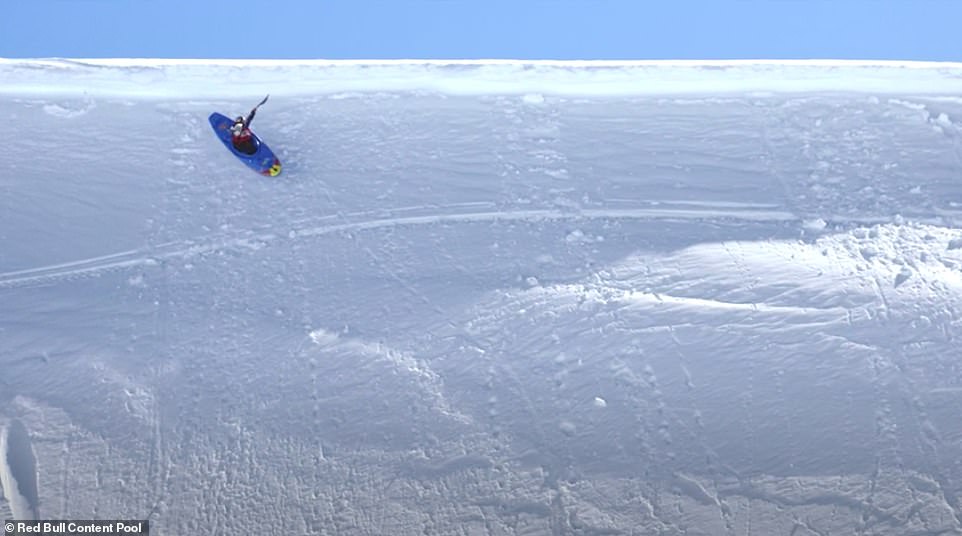 At certain points, Serrasolses flies through the air as he whizzes off razor-sharp edges. He then thuds back down on the compact snow and continues rocketing along

It had apparently never been performed in a kayak before which gave Serrasolses another reason to celebrate after coming to a halt. When he does stop, he seems to be in a euphoric state with a big grin from ear to ear.

The seasoned athlete tackled the descent last September, the start of the Chilean spring when there was still snow on the ground for the most part and the rivers were flowing well. 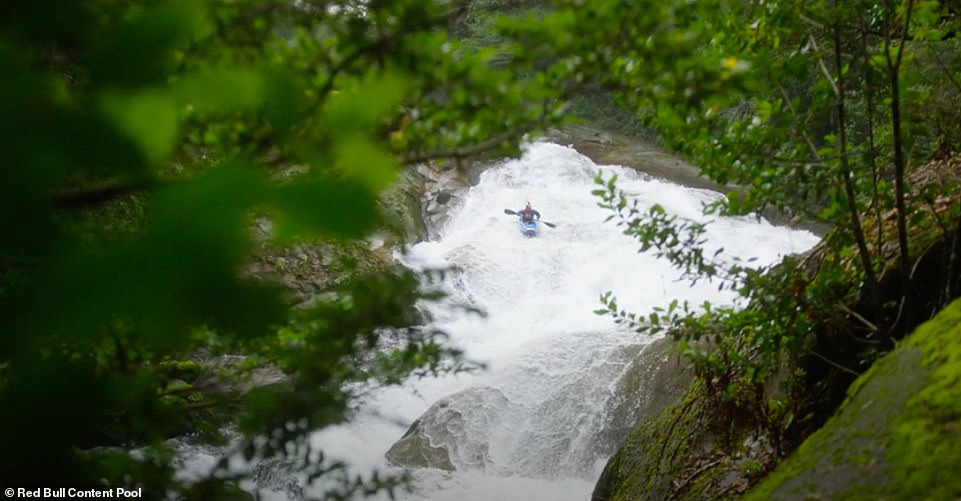 After navigating the snowy volcano and a patch of woodland, Serrasolses lands in a fast-flowing river 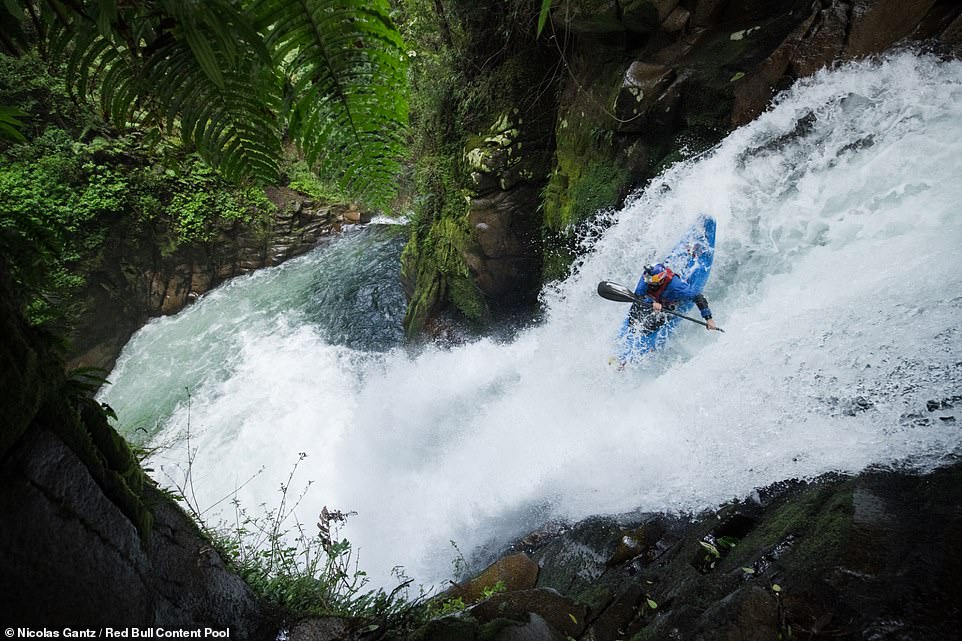 While the extreme kayaker said the adrenaline rush is a big factor in why he takes on extreme challenges, he added that the ‘places, people and experiences’ are the biggest thrills for him when it comes to the sport

As most of the athlete’s other competitions were cancelled due to the pandemic, he set his sights on some more ambitious projects with the Villarrica descent being one of these.

He said: ‘I’ve always wanted to kayak down the snow and unite the four elements: earth, air, water and fire. Taking advantage of the great winter that Chile experienced in 2020 and the difficulties to travel due to the situation we live in, I decided that this was the year to develop the project.’

Before performing the stunt, Serrasolses did a test run but this didn’t go too well. During the practice descent he hit a bump, almost did a 360-degree spin and flew 30 feet through the air before landing flat on his face.

When he gets to a gaping waterfall, Serrasolses performs a mind-boggling flip in freefall 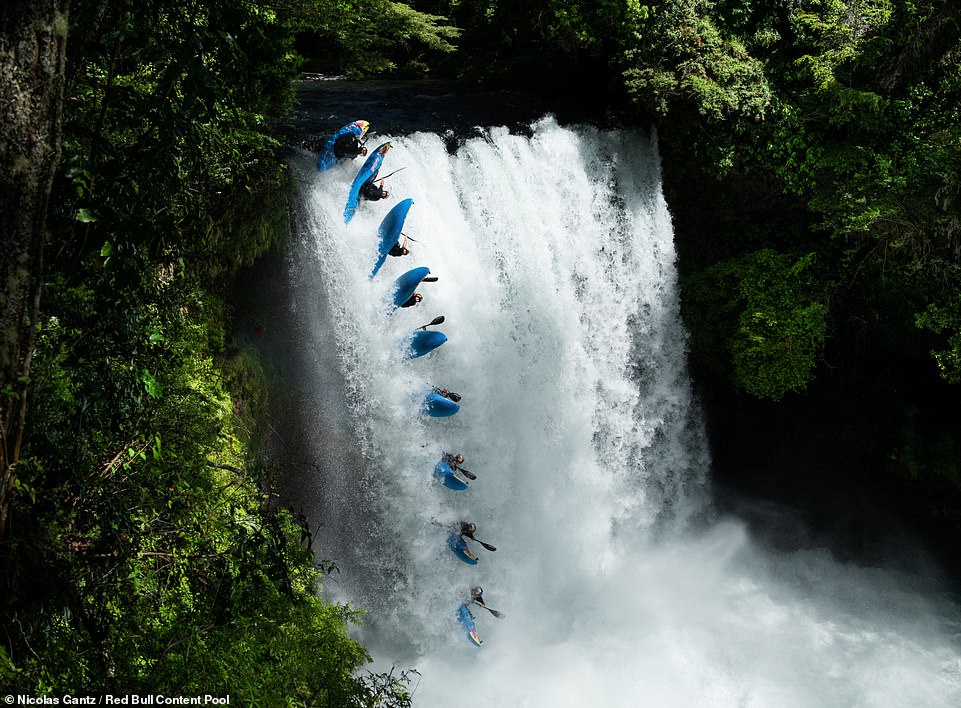 He added: ‘The part on the snow was kind of the hardest part as a kayak is not really made for the snow so you ride it like a sled. You go really fast but you’re kind of out of control.’

While the extreme kayaker said that adrenaline is a big factor in why takes on extreme challenges, he added the ‘places, people and experiences’ are the biggest thrills for him when it comes to the sport.

‘Also’, he mused, ‘everything in kayaking is about living simply. It transports you to a different time where things were more simple’.