Death In Venice review: It’s remarkable how good it is

There is a special poignancy about Benjamin Britten’s setting of Thomas Mann’s novella Death In Venice, an opera about a dying writer composed by a dying musician.

Britten was so ill by the time he finished it that he was not only unable to conduct the 1973 premiere as intended, but could not even attend the first night.

Under the circumstances it’s remarkable how good it is. The orchestrations are totally memorable, composed for a slimmed-down orchestra, with a battery of percussion, a virtuosic part for solo piano and, at climactic moments, some extraordinary writing for the strings, all superbly carried off by the orchestra. 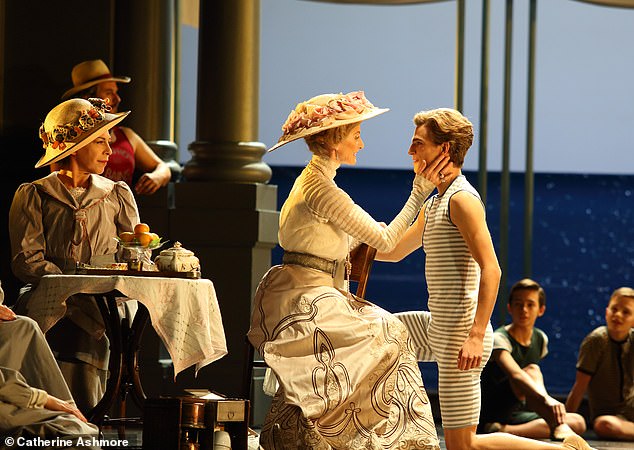 Aschenbach is totally obsessed with a Polish youth, Tadzio (the charismatic Leo Dixon, above with Elizabeth McGorian)

The role of Aschenbach is memorably taken by Mark Padmore. He completely inhabits the sad, ever-diminishing world of the dying writer, totally obsessed with a Polish youth, Tadzio, here danced (rightly) by a somewhat older adolescent than normal (the charismatic Leo Dixon).

Padmore is best known as a recitalist, so the magnificence of his tirelessly sung Aschenbach will have surprised many, myself included. By rights he will have made the role his own for as long as he wants it.

Padmore is matched by a virtuoso performance, both as singer and actor, from Gerald Finley. He sings his seven roles with such conviction and histrionic brilliance, he almost defeats the object of Britten wanting us to know that these humdrum characters are always the same angel-of-death figure.

Stir in a supporting cast of singers of the stature of Rebecca Evans as the Strawberry Seller and you’ve got nothing less than a triumph.

While he was working on Death In Venice, Benjamin Britten was advised not to go and see the 1971 Dirk Bogarde film.

The director David McVicar offers a lesson to some of his colleagues, especially his German ones, in how to be imaginative yet totally faithful to a composer’s intentions.

After Peter Hall’s A Midsummer Night’s Dream, Peter Pears, Britten’s partner, tearfully said: ‘How Ben would have loved this.’ The same is surely true here.

McVicar is well matched in flair and technical brilliance by the designer Vicki Mortimer and her team.

Mortimer’s Venice is a dark and sinister place with, thanks to Paule Constable’s lighting, figures disconcertingly emerging out of the darkness.

Last but not least, the conductor Richard Farnes, formerly of Opera North, conducts with total command and understanding.

He is standing in for an indisposed Mark Elder, but this exceptional talent is nobody’s stand-in. There are so many third-rate imported conductors on Covent Garden’s guest roster, a regular place should be found for Farnes, an entirely credible potential successor to Antonio Pappano.

Shame this production is not in the cinemas. But then it’s hardly Christmassy.