Death of the black cab? Fifth of all London taxis are now off the road after passengers ‘evaporated’

A fifth of all black cabs in London have been taken off the road with hundreds stored on farmer’s fields and drivers on ‘starvation wages’ after passengers ‘evaporated’ during the Covid-19 pandemic, research has revealed.

The number of taxis licensed in the capital plummeted from 18,900 on June 7 to 15,000 on November 8, according to Transport for London (TfL) data.

Black cab rental firms have been forced to hire fields and farmland dotted around the edge of the city to store vehicles handed back by drivers in recent months.

The Licensed Taxi Drivers’ Association (LTDA) believes only 20 per cent of cabbies are still driving their vehicles.

Black cab rental firms have been forced to hire fields and farmland around the city to store vehicles handed back by drivers in recent months (pictured: unused cabs in Epping Forest) 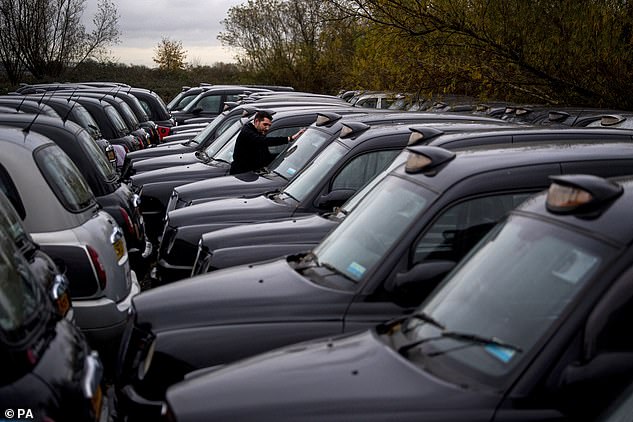 A staff member walks through unused black cabs parked in a large area of farmland in Epping Forest, which is being rented by GB Taxi Services to store their large fleet of London taxis

General secretary Steve McNamara said they are earning ‘starvation wages’ around a quarter of normal levels and are ‘doing desperate things’ such as selling their taxis for well below market value to ‘get through the next few months’.

He added that the pandemic has been a ‘complete and utter nightmare’ for drivers who have ‘fallen through the gaps’ in the Treasury’s furlough scheme.

These include those who recently bought a new £65,000 electric taxi, or receive a small pension from a previous job.

Many have received ‘no income at all’ since March, Mr McNamara said.

He commented: ‘We’re in a position now where London could lose this icon. We’re a very viable business. We’re an integral part of this city’s DNA.

‘We need a specific package that’s targeted towards taxi drivers in London just to help us get through this.’

London cabbie Andy Biggs, 63, said demand has ‘evaporated’ and he is lucky if he has three customers a day.

‘When we first went back after the initial lockdown, things started to get a little bit better very slowly,’ he said. ‘But now it’s as dead as it’s ever been.’ 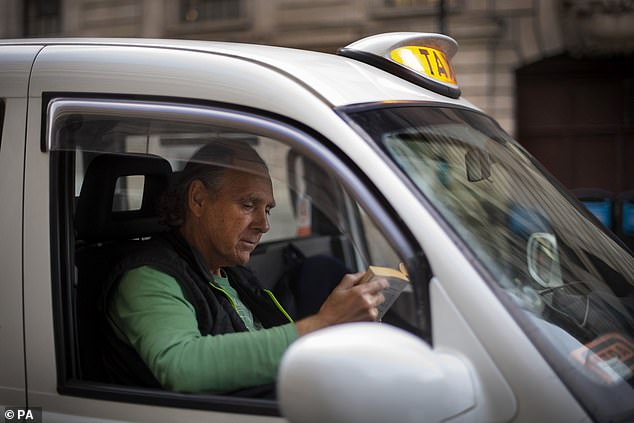 London cabbie Andy Biggs (pictured above, outside Victoria station in the capital city), 63, said demand has ‘evaporated’ and he is lucky if he has three customers a day 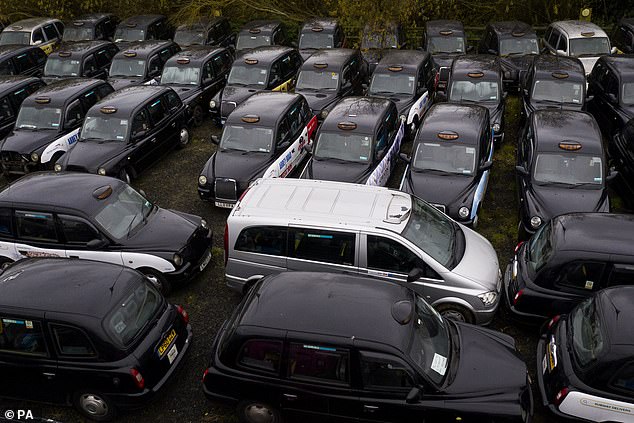 Unused black cabs are seen parked in a large area of farmland in Epping Forest, where GB Taxi Services are storing their large fleet of taxis that are no longer being used 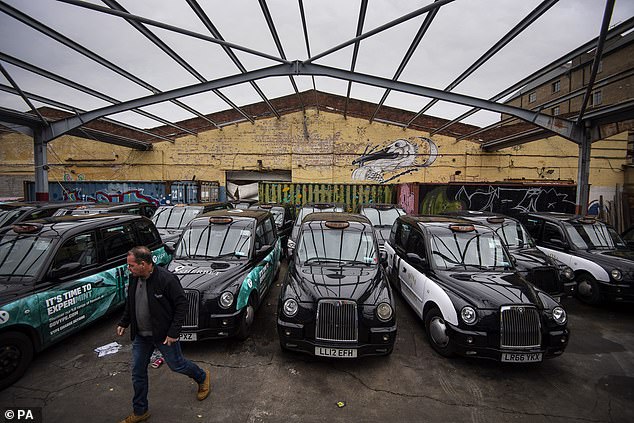 A staff member walks through a yard of delicensed black cabs at Sherbot London in the east of the city, where a large amount of their rental fleet are building up due to a drop in demand

North London based rental company GB Taxi Services has seen the occupation rate of its fleet of 100 black cabs plummet from 95 per cent before the crisis to just 10 per cent, despite halving its fees to encourage drivers to hold on to their vehicles.

It is one of two firms using an area of farmland in Epping Forest, Essex, to store around 220 unwanted taxis so they can stop paying to insure them.

But the plan backfired when intruders stole catalytic converters and diesel particulate filters from around 50 of them.

Simon Georgiou, a director at GB Taxi Services, said: ‘We got our knees taken away with Covid and loads of vehicles getting handed back. Then this theft happens, which cost in excess of £120,000. We’re in a right mess.’ 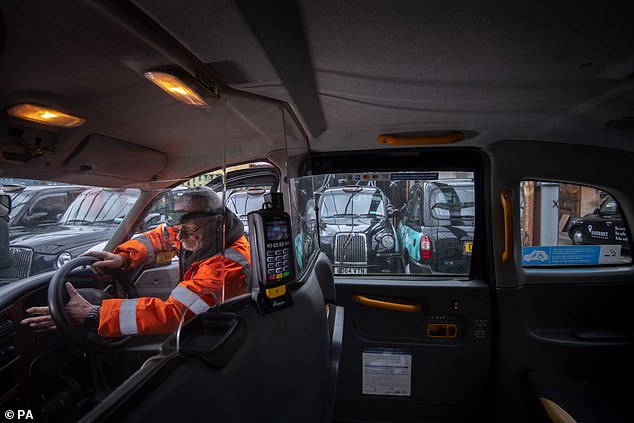 An engineer inspects a vehicle in a row of delicensed black cabs at Sherbot London in east London, amid a severe drop in demand for taxis as Covid-19 restrictions reduce travel 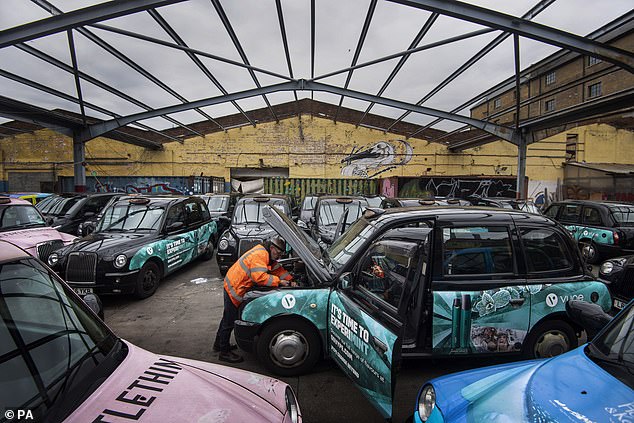 An engineer pictured working on a delicensed cab in Sherbot London. The Licensed Taxi Drivers’ Association (LTDA) believes only 20 per cent of cabbies are still driving their vehicles 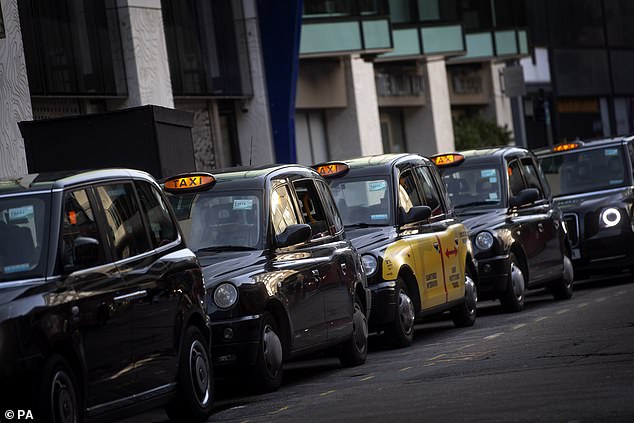 A queue of black cabs outside Victoria Station in London. The capital city’s taxi drivers are facing long waits for a single fare after the industry has seen a severe drop in demand

Another rental firm, Sherbet London, has hired a car park to help store 400 unoccupied cabs, representing two-thirds of its fleet.

Chief executive Asher Moses said: ‘The whole trade has suffered. There must be 2,000 taxis on fields at the moment.’

He accused ministers of failing to deliver on their commitments during the pandemic.

Mr Moses added: ‘When Covid struck, we had the Government say “don’t worry we will support businesses like yourselves”. But unfortunately they did not, and they left us out to rot.’

TfL said it has provided drivers with ‘practical advice on a number of issues’ during the crisis, and insisted black cabs ‘remain an integral part of the transport network’.