The cancer death rate in the US has plummeted 33 percent in the past three decades, according to reassuring data that highlight’s the country’s progress in fighting the disease.

A report by the American Cancer Society (ACS) estimated that 3.8million deaths have been averted since 1991 thanks to better treatments, diagnostics, public awareness campaigns and healthier habits.

Lung and breast cancers saw the biggest improvements in mortality — thanks to successful awareness campaigns and falling smoking rates — but there were also significant falls in skin and blood cancer death rates.

The ACS described the decline as ‘truly formidable’, but noted death rates were yet to improve in some cancers. President Joe Biden has set the goal of halving cancer deaths over the next 25 years through his up to $1billion ‘cancer moonshot’ initiative.

The above graph shows how cancer deaths have slowed in the United States. The blue line shows recorded deaths while the red indicates what would have happened if the country had remained on the same rate of increase. It is split by men and women 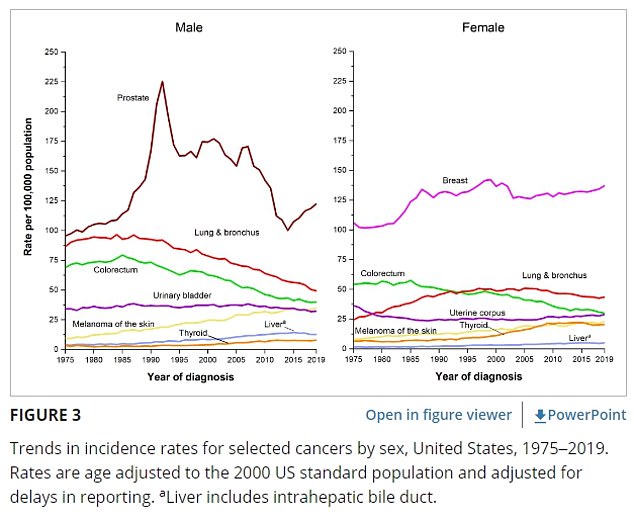 The above charts, also split by gender, show the rate of cases of selected cancers being detected in the United States annually. Cases of prostate and melanoma cancer are heading upwards in men, while among women breast cancer is rising

The annual American Cancer Society’s report uses national statistics to analyze the almost 200 cancers in the US.

The fall has accelerated over time, from one percent in the 1990s to around two percent between 2015 and 2020.

Dr Karen Knudsen, the ACS’ chief executive, described the figures as ‘truly formidable’ during an interview with CNN.

She added: ‘New revelations for prevention, for early detection and for treatment have resulted in true, meaningful gains in many of the 200 diseases that we call cancer.’ 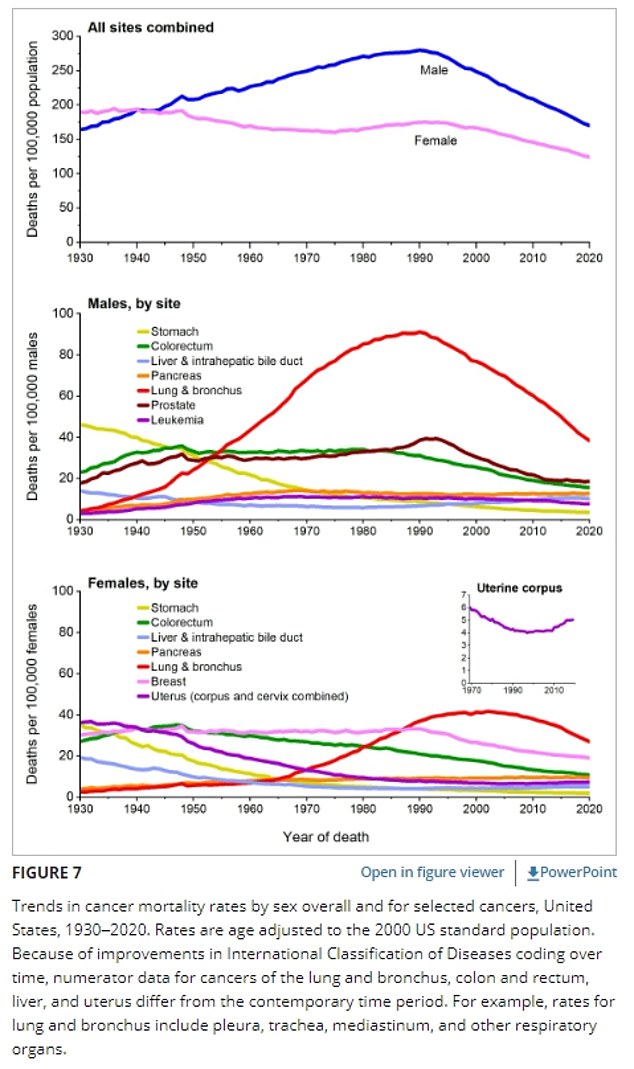 The above chart shows trends in cancer mortality over time. It highlights a major drop in lung cancers amid improvements in treatment and fewer people taking up smoking 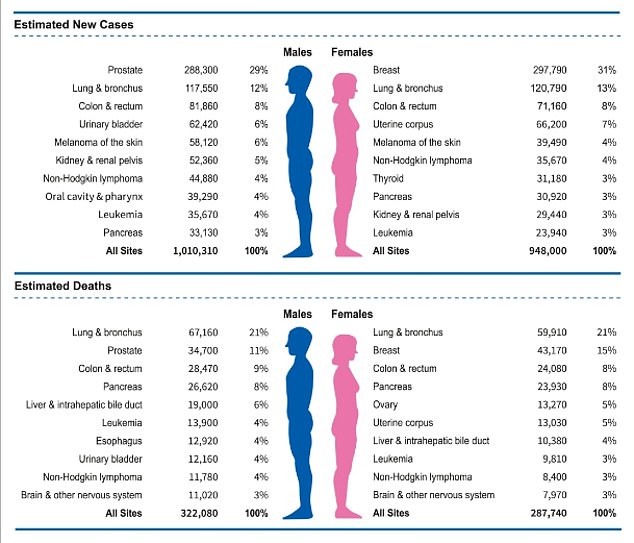 These are estimates for the number of cancer cases and deaths for selected cancer types by year, for the year 2023. Made by American Cancer Society

The new report found that the five-year relative survival rate for all cancers has risen from 49 percent in the 1970s to 68 percent by 2020.

Lung cancer is the most common cause of death from cancer, accounting for about 130,000 fatalities every year.

Fewer people smoking, screening improvements and advances in treatments were behind the decline.

About 10 percent of Americans smoke cigarettes or cigars now, compared to more than 40 percent in the 1970s.

Breast cancer — the second leading cause of cancer death in the US — has also seen a decline since 1989, dropping by 43 percent.

This is due to a combination of early diagnosis due to better screening programmes and improved treatments.

Skin cancer survival rates also improved, with the rates of those surviving more than three years after the cancer has spread to other areas of the body doubling from 20.6 to 39.3 percent over the past decade.

They also predicted a likely rise in survival rates for cervical cancer.

Cases have dropped 65 percent among women in their early 20s between 2012 and 2019, who were the first generation to be vaccinated against human papillomavirus (HPV) — which raises the risk of the cancer if it triggers an infection. 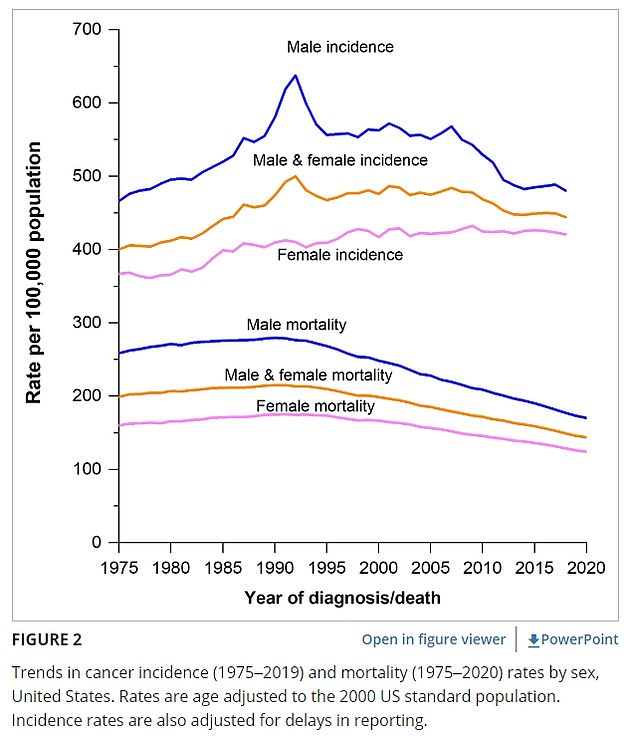 The above chart shows the rate of cancer cases and deaths by gender and overall. The male line is blue, female is pink, while the overall line is orange

Joe Biden said ending cancer ‘as we know it’ was one of the reasons he ran for president in September as he supercharged his ‘Cancer Moonshot’ initiative with a shot of glamour from the Kennedy family.

Biden, who wants to cut cancer deaths in half over the next 25 years, said cancer can be transformed into a disease that can be managed and lived with.

He issued his new call to arms at the John F. Kennedy Library, on the 60th anniversary of Prsident Kennedy’s famous ‘Moonshot’ speech, where JFK rallied America to beat Russia to the moon — which was accomplished in 1969.

‘When he set that goal, he established a national purpose that could rally the American people and a common cause. And he succeeded,’ Biden said of JFK.

‘Now in our time, on the 60th anniversary of his clarion call, we face another inflection point, and together, we can choose to move forward with unity, hope and optimism.

‘I believe we can usher in the same unwillingness to postpone – the same national purpose – that will serve to organize and measure the best of our energies and skills to end cancer as we know it. And even cure cancers once and for all.’

The fight against cancer is personal for Biden, who lost his son Beau to brain cancer in 2015.

The Cancer Moonshot, originally created when Biden was vice president, came in the wake of Beau’s death.

Concerns were also raised, however, over rising case rates which could foreshadow a rise in deaths.

Breast, uterine and prostate cancer cases are all rising in the US, which may in part be down to improvements in screening. But this could also signal a rise in fatalities further down the line.

Doctors warned that upticks in uterine and breast cancers in women were largely being attributed to continued declines in fertility rates and rising obesity levels.

The ACS said in their report: ‘Of concern are rising [cases] for breast, prostate and uterine cancers, all of which have a wide racial disparity in mortality and are amenable to early detection.’

The report also pointed out that despite ongoing research there has been no improvement in fatality rates for pancreatic cancer.

Pancreatic cancer has one of the lowest survival rates in the US, with just 12 percent of patients living beyond five years of their diagnosis.

This is largely because it triggers no symptoms until late in the disease, when the cancer has likely already spread to other areas of the body. Its symptoms, when they do appear, are also often mistaken for less sinister conditions.

In its report, the ACS also estimates cancer cases and deaths for the coming year.

It showed that cases expected to be detected will rise in 2023 from 1.91million to 1.96million as a result of improvements in screening.

Deaths are also expected to tick up slightly from 609,300 to 609,800, likely due to the sheer volume of people getting cancer rather than a reversal of progress.

She said: ‘The report showing the US has cut cancer deaths by one-third over the last 30 years is great progress, which we’ve achieved through driving smoking rates down, improving early detection, and delivering better treatments for many cancers.

‘It means millions of American families have been spared the immeasurable loss of a loved one.’

She added: ‘The report also underscores that there’s more work to do to save more lives.

‘President Biden’s vision for ending cancer as we know it is building on the progress we’ve made with an all-hands-on-deck effort to develop new ways to prevent, detect, and treat cancer – and ensure that the tools we have and those we develop along the way reach all Americans.’