Amir Khan was bombarded by threats and trolling messages after he posted a picture of his Christmas tree online.

The former boxer, who is a practicing Muslim, posted a photo of the tree on Instagram yesterday night, saying his three-year-old would like it when she woke up.

He posted: ‘While everyone’s asleep, daddy put the Christmas tree up. Lamaisah’s going to be happy.’

But the post led to a horrific backlash from some his followers, who posted abusive and threatening messages in response.

He said he had put up the tree for his three-year-old daughter, who he said would be happy 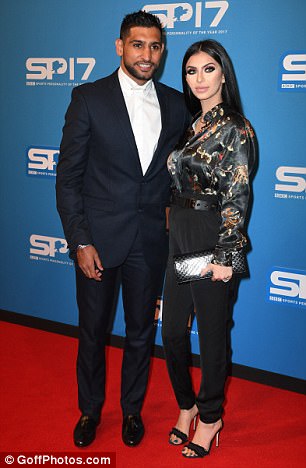 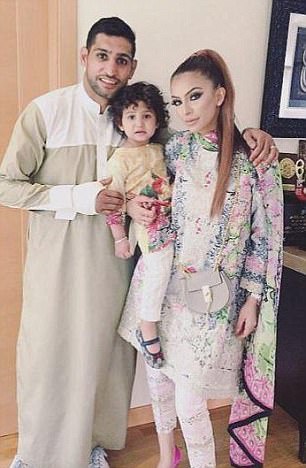 Khan, pictured with wife Faryal Makhdoom and (right) with daughter Lamaisah, is a practicing Muslim and has previously spoken of his faith

One troll wrote: ‘You mut be dead and your family will be death i promise and allah must promise i and allah see you and check you your angel death came too see you. [sic]’

Some accused Khan of ‘betraying’ Islam, while another told Khan he should ‘go to hell’ for putting up the tree.

But many other followers, including a number who said they are Muslim, defended Khan’s actions.

One wrote: ‘A Christmas tree for his daughter doesn’t mean that he’s changed religions.’

Another added: ‘He lives in England in a western culture where Christmas is celebrated. It’s about respect just like if you we’re in another country. It’s for his daughter.’

Others defended Khan, insisted he was taking part in Western culture with his daughter