At least four people died in accidents on roads left slippery by the first significant snowstorm of the season to strike Minnesota.

Plymouth police say a pedestrian helping a driver who spun out was hit by another vehicle that spun out around 12.15am Saturday on Highway 169.

The pedestrian died at the scene. That person’s name hasn’t been released.

The State Patrol says a 58-year-old St. Paul man died around 9.30pm Friday when his pickup spun out on Highway 169 and rolled in Princeton.

He was identified as Clarence A. Coker, the Minneapolis Star Tribune reports.

Carol Minger walks on the Stone Arch Bridge as it snows in Minneapolis on Friday, October 27. At least four people died in vehicular accidents during the October storm 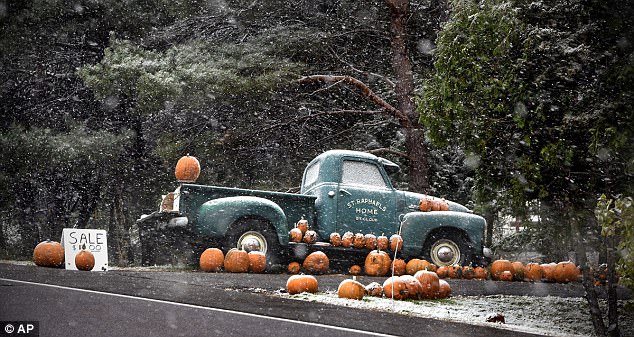 Snow falls on a display of pumpkins for sale along Stearns County. The National Weather Service noted that this much snow this early is rare

They were a 44-year-old Duluth trucker named Christopher M. Lucia, who went off Interstate 35 into the St. Louis River in Scanlon, and a 26-year-old Pierz man named Alvaro A. Rodriguez, who lost control of his vehicle and was struck by a truck on Highway 25 near Brainerd.

The truck driver, Rodney A. Lund, was not injured.

The Star Tribune reports that there were 217 crashes across the state during Friday’s storm.

More than 10 inches of snow fell in Duluth, Scanlon and Hermantown. 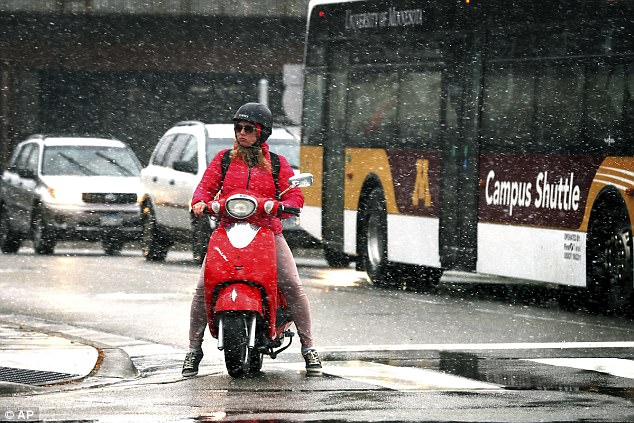 A commuter braves the first snow of the season on a scooter in Minneapolis. In Duluth, 10.6 inches of snow fell

In Duluth, 10.6 inches fell. This broke the city’s record for snowfall on October 27 and is the second-highest snowfall for an October day in the city.

The storm was accompanied in Duluth by high waves off of Lake Superior.

Just one week prior, temperatures were in the 70s across the region.

The National Weather Service noted that this much snow this early is rare.

One needs to look back eight years to find the last time that measurable snow fell in October.