The death toll from Storm Gloria has risen to 13 people who died across Spain this week as three – including a Briton – remain missing.

Searches were continuing on the island of Ibiza on Friday for Ben Garland, 25, after his jacket was found floating in the ocean.

Meanwhile shocking pictures emerged of the damage caused in Ibiza and narby Mallorca and Ibiza just weeks before the start of the tourist season. 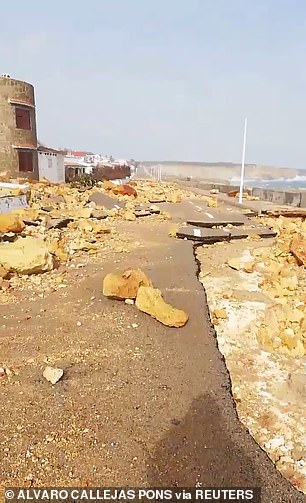 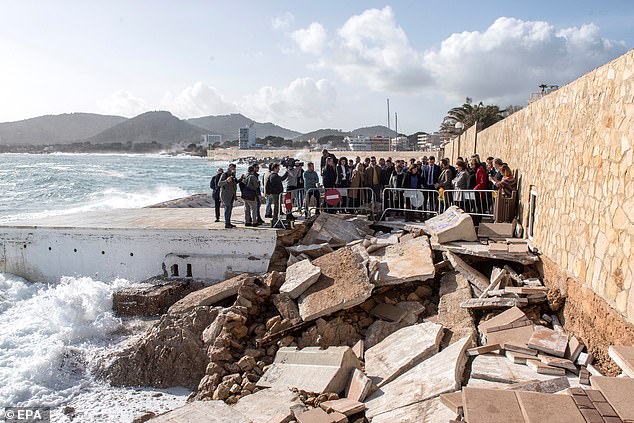 Prime Minister Pedro Sanchez visited some of the worst-affected areas on Friday, which were hit just weeks before tourist season begins 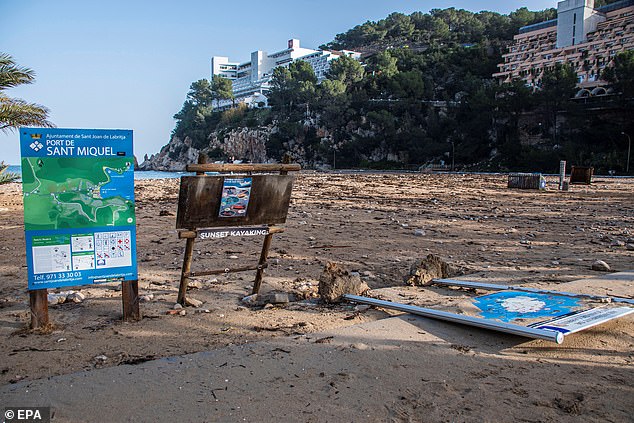 Ibiza was also badly hit by the storms and has also called for aid. Briton Ben Garland went missing from the island during the storm, amid fears he was swept out to sea

The Spanish Prime Minister Pedro Sánchez visited the worst-hit areas where beaches have been wiped out, promenades destroyed and cafes and restaurants by the sea severely damaged by the huge waves and gale-force winds.

The mayors of holiday resorts such as Cala Rajada, Cala Millor, Portocolom, Portocristo, s’Illot, Cala Rajada, Sant Llorenç, Son Servera, Manacor and Capdepera are worried that the trail of destruction will seriously affect how many holidays are sold at a time when hotels and tour operators are negotiating the sale of places. 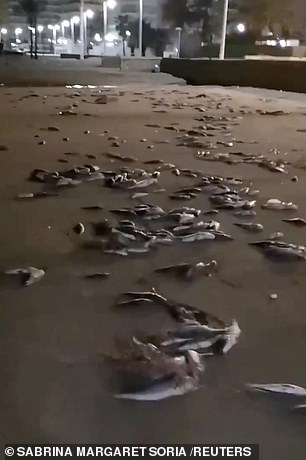 Dead fish cover the beach in the aftermath of Storm Gloria in Cullera, Valencia

They are calling for urgent aid and want the worst-hit resorts declared catastrophic zones so that extra money can be allocated towards the massive repair bill likely to run into millions of euros.

The Mayor of Son Servera, Natalia Troya said: ‘The beach at Cala Millor has practically disappeared. There is one month left before the start of the season, this is when the places are sold and tour operators ask for sun and beaches.’

Waves as high as 12ft swept away the sand in numerous resorts, flooded houses and tourist businesses, left huge boulders on the seafront and splattered walkways and promenades with mud and pebbles.

Restaurant furniture was smashed up and umbrellas and sunbeds flung into the sea.

Pedro Sánchez promised to activate from this Friday, without waiting for the Council of Ministers, all the mechanisms at his disposal to give a response to the people and businesses affected by the storm in Mallorca.

‘We will spare no resources,’ he has promised. 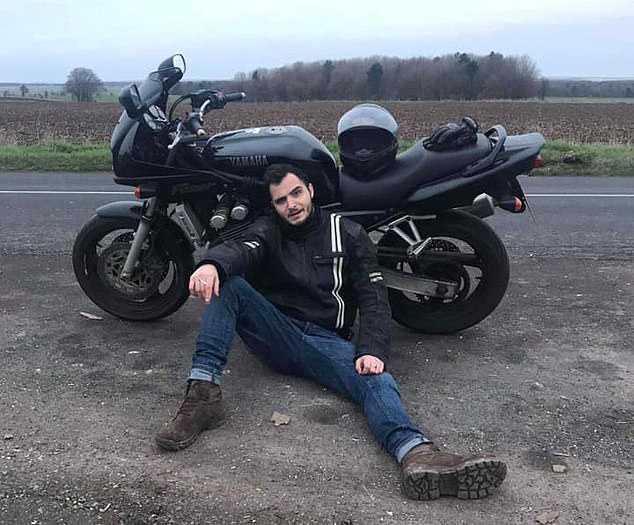 Garland was reported missing after a jacket with his ID in it was found floating in the ocean, and searches are continuing to try and find him 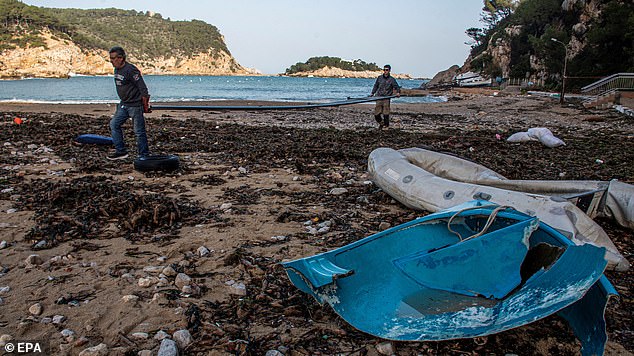 Two people inspect a beach area near the harbor of San Miguel, Ibiza, after it was covered in debris from Storm Gloria 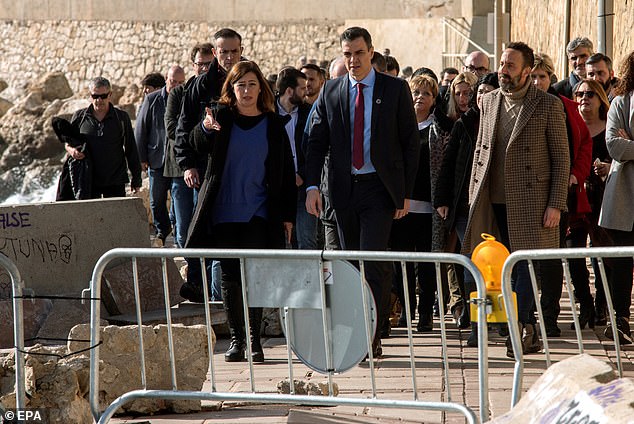 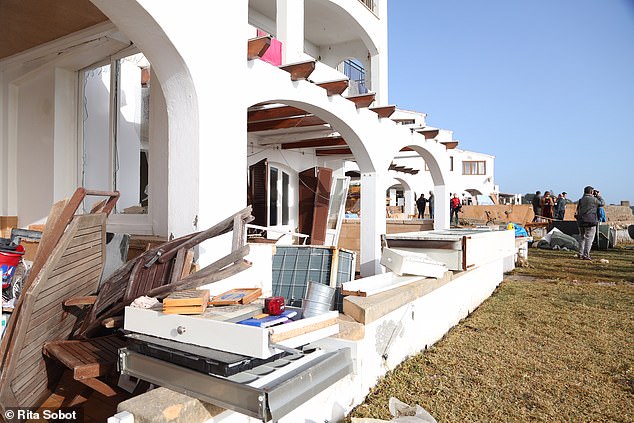 ‘I didn’t want to miss the opportunity to be in Mallorca and confirm the Government’s commitment to solve the situation that is happening at the door of the tourist season.’

Storm Gloria caused 435 incidents in the islands: 352 in Mallorca, 52 in Ibiza, 20 in Menorca and eleven in Formentera.

In the coming days, the Prime Minister will also visited the affected areas of Valencia, Murcia and Andalucía.

In his brief address to the media, he called for ‘reflection’ and development of ‘a culture of prevention’ in addressing climate change as ‘it is exacerbating the effects’ of such weather phenomena 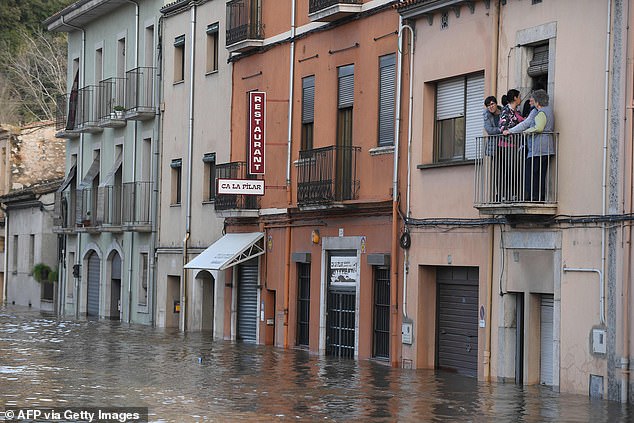 The city of Girona, on the Spanish mainland, was also badly hit by the storm with streets and homes flooded in the aftermath 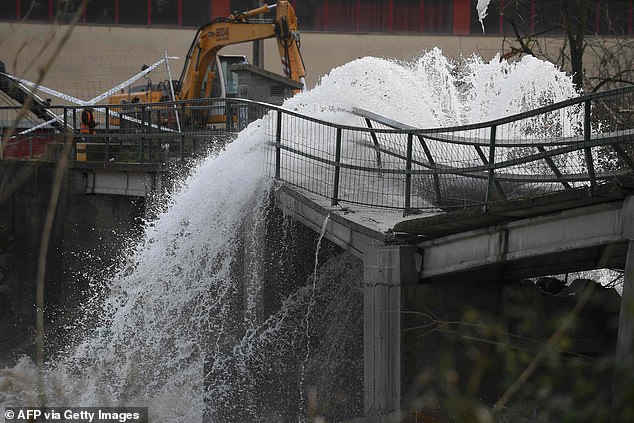 Water from a broken pipe on a damaged bridge flows into the Ter river in Angles, near Girona 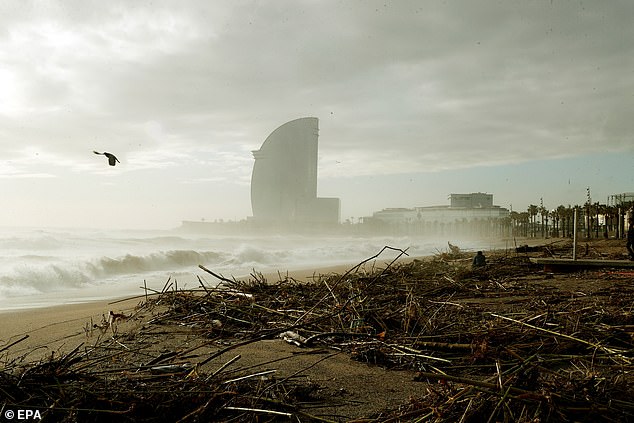 View of the damages at Barceloneta beach in Barcelona, Spain