Death Valley: Nazi execution site where 1,000 people were shot dead will be excavated in Poland

The site of a Nazi mass execution known as death valley is to be excavated after researchers discovered bullet shells, clothing buttons and medal fragments.

The find was made on the outskirts of Chojnice, a town in northern Poland, after researchers from the Institute of Archaeology and Ethnology of the Polish Academy of Sciences carried out an exploratory investigation to locate the execution spot.

Despite knowing mass executions took place near the now, historians had not been able to pinpoint the exact location of the graves..

In the early stages of WWII, German SS shot dead more than 1,000 locals as part of their ‘action against the intelligentsia’ near Chojnice.

In addition to 40 civilians and a priest, around 200 psychiatric patients were also murdered at the site. 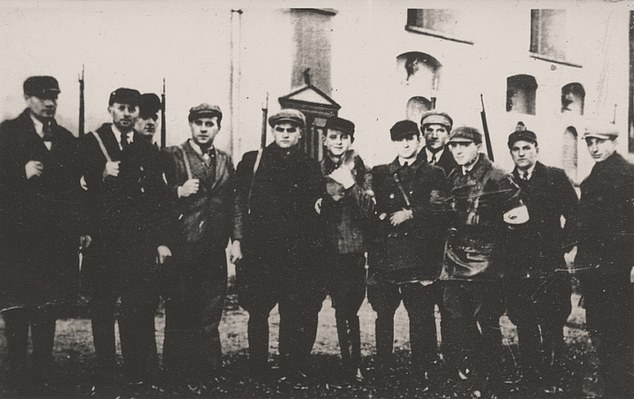 Pictured: Members of one of the Selbstschutz paramilitary groups in the Pomeranian region of north Poland 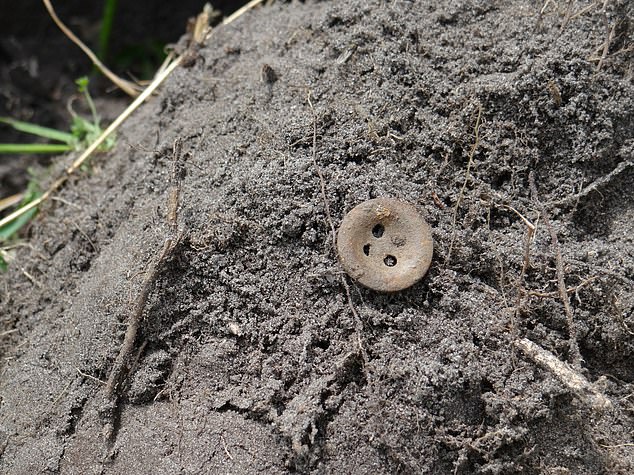 The site of a Nazi mass execution site in northern Poland, known as Death Valley, is to be excavated after bullet shells, clothing buttons (pictured) and medal fragments were discovered 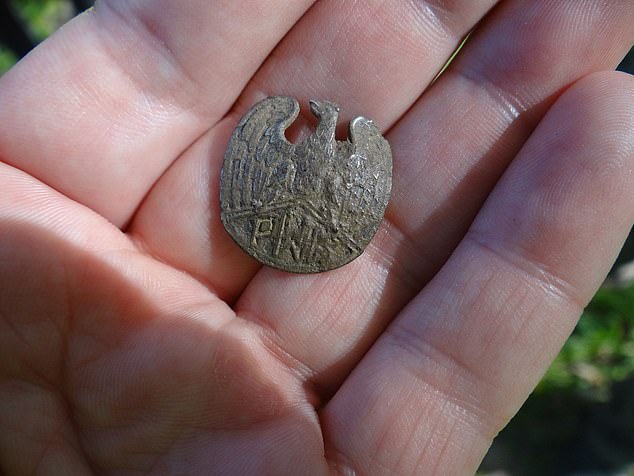 Pictured: A medal fragment discovered by researchers at the execution site in northern Poland

This was followed by a series of systematic killings against Poles and Jews in the town and surrounding villages.

Mass shootings also took place at the location in January 1945 and scientists believe over 1,000 bodies could be buried there.

Dr. Dawid Kobialka, from the Institute of Archaeology and Ethnology of the Polish Academy of Sciences said: ‘The bodies of the victims were thrown into shooting ditches and many were burnt to hide the evidence.’

Despite attempts to keep the execution secret and to cover up traces of the crime by burning some of the bodies, local residents knew about the murders and dubbed the place Death Valley.

After the war, exhumations took place but were done so half-heartedly.

Dr. Kobialka said: ‘They were held in a hurry, many smaller human bones were not picked up, no detailed photographic and drawing documentation was made. 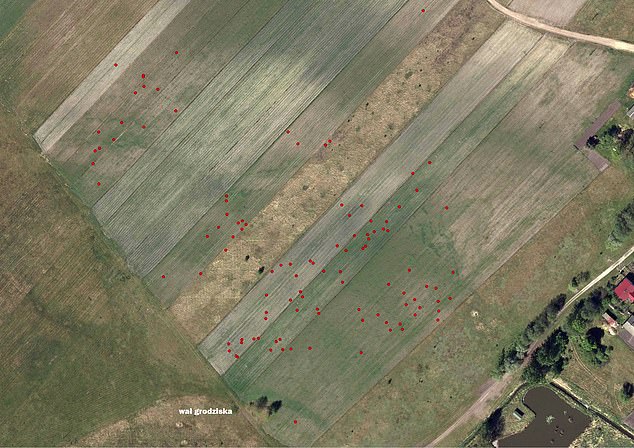 Pictured: Locations where researchers think some of the bodies and personal items may be at the mass execution site in northern Poland 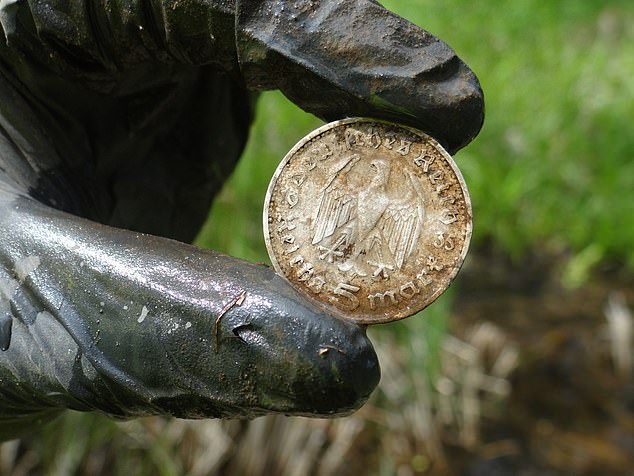 Pictured: A German five Deutschmark coin discovered by researchers at the site in northern Poland 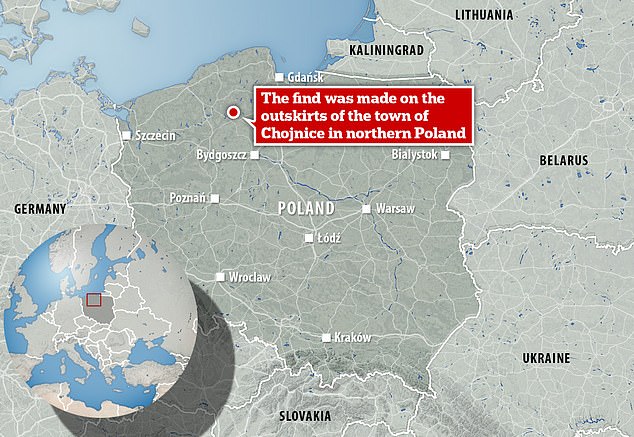 They are also talking to eye-witnesses from the massacre.

Kobialka said: ‘We hope this will help us in the precise location of the shooting ditches and the space in which, according to the testimony of witnesses, the bodies of the victims of German crimes were burned in January 1945.’

The archaeologists plan to start limited excavations in August.

Following the outbreak of WWII in September 1939, the SS formed paramilitary groups called the ‘Selbstchutz’, made up of German nationals living in Poland, to help them manage the local population.

Under the command of the SS, the factions were of particular danger to Poles because of their knowledge of local relations and social conditions.

The factions used the opportunity to settle old-time neighbourhood disputes and to loot the property of murdered Poles.

The first executions were carried out on September 15, 1939, with three residents of Chojnice gunned down in a nearby forest upon the orders of SS-Standartenführer Heinrich Mocek, who was head of the local paramilitary group. 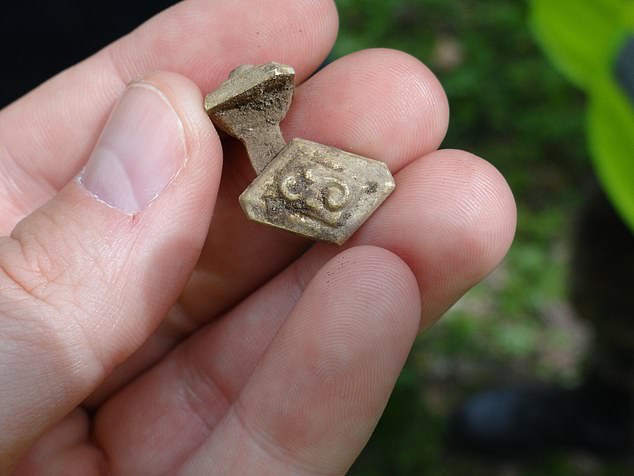 Pictured: A cufflink discovered by researchers at the execution site in northern Poland 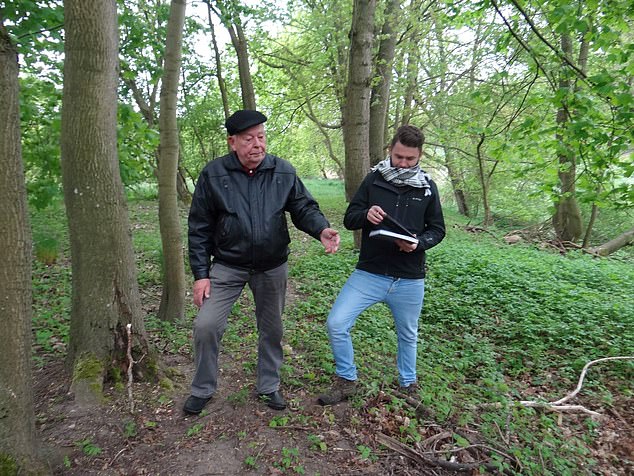 Pictured: An unnamed eyewitness helping with the initial investigation (left) points to the shooting ditches where SS guards murdered 1,000 locals near Chojnice in northern Poland. Researcher Dr. Dawid Kobialka, from the Institute of Archaeology and Ethnology of the Polish Academy of Sciences, stands next to him (right)

From October 1939 through to January 1940, they carried out extensive exterminations across the whole region as part of their Polish Intelligentsia Action, which saw around 30,000-40,000 Poles living in the Pomerania region murdered.

In the last days of the occupation, the Chojnice Death Valley again became a place of mass executions.

At the end of January 1945, the Germans murdered a column of between 800 and 1000 prisoners from the doomed Warsaw Uprising and those from the nearby city of Bydgoszcz being driven west.

After being shot their bodies were burned.

According to a town court survey conducted in 1945, 1,431 people were murdered in Death Valley.

An exhumation carried out shortly after the liberation of the town uncovered 352 bodies.