DEBORAH ROSS: Auschwitz ‘too harrowing’? That’s why you must watch

The Windermere Children: In Their Own Words

This week, quite a few people told me they would not be watching any of the programmes that had been commissioned to commemorate Holocaust Memorial Day and 75 years since the liberation of Auschwitz as it would be too ‘harrowing’ and ‘distressing’ and ‘bleak’. (And also, in one instance, ‘too challenging’.) So I had to say that is exactly why you have to watch. As the writer and Holocaust survivor Elie Wiesel has said: ‘For the dead and the living, we must bear witness.’ 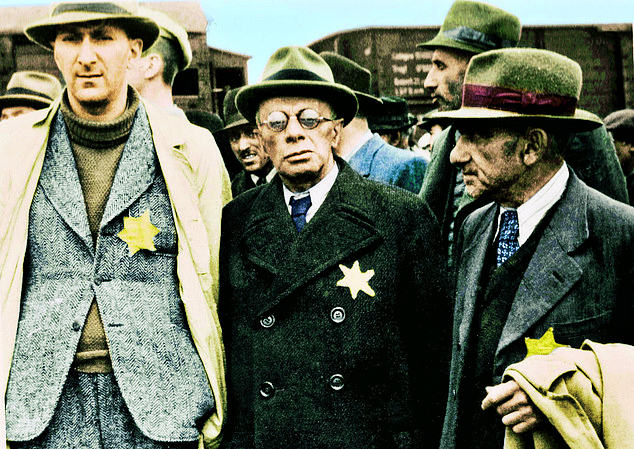 Jewish prisoners arrive at the camp wearing the Star of David in Auschwitz Untold: In Colour

My maternal grandmother (originally from Galicia, which is now partly in Poland and partly in Ukraine) lost siblings, cousins, aunts, uncles – more than 220 relatives, we have worked out – to the camps and also the shootings in the woods. They must be remembered. So this is what I tell people, and this is what I tell my own children: ‘This is your great-grandmother’s story. Watch.’ And what they never say to me in return is, ‘My, you’re a lot of fun to be around.’ I don’t know why.

Auschwitz Untold: In Colour played across two nights on More4, before being shown on Channel 4 proper on Wednesday, which felt slightly marginalising, and I wondered if they could not have cancelled the ad breaks out of respect. Might that have been possible? One minute you had an Auschwitz survivor saying that the starvation was such that they had started eating the dead, or it was another remembering the screams of mothers as their babies were ripped from them, and the next it was Simon Cowell talking up Barclaycard or those bloody meerkats. This did not sit well with me.

But that is about scheduling, I suppose, and not the programme itself. Following on from Peter Jackson’s They Shall Not Grow Old, which so effectively colourised black-and-white footage from the First World War, this colourised photographs and footage from the ghettos and the camps. It is amazing what colour can do. It is magical. Suddenly, everything springs vividly to life, and it stops being about people from way back then who are somehow not the same as people of today.

The piles of shoes looked like any you could buy at John Lewis. These people were just like you or me…

As we saw Jews being herded into camps you could wonder about the baby in the little red hat – did he or she survive? – or the young woman in the mustard scarf who looked bewildered and was holding her son’s hand. Did she have any idea what was coming? Inevitably, she would have been separated from her boy, but when? Then, or did they get a bit more time together? Also colourised were the piles of suitcases that were confiscated from Jews and the piles of shoes that, presumably, were no longer required as their wearers had been murdered. They looked like anything you could buy at John Lewis, pretty much. These people were just like you or me.

This wasn’t colourised to the same extent as Jackson’s film and left some footage well alone, such as the emaciated bodies being shovelled into mass graves, which has to be seen, even if it is ‘challenging’. 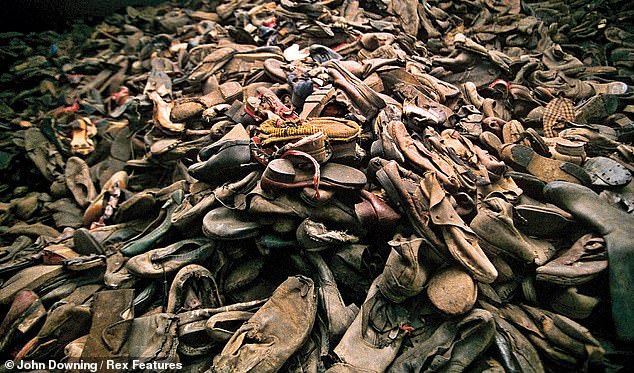 The shoes of victims murdered in the death camp. It is amazing what colour can do. It is magical. Suddenly, everything springs vividly to life, and it stops being about people from way back then who are somehow not the same as people of today

It was all amazingly powerful, as were the oral histories. It was: ‘By the age of seven I had seen more dead people than live people.’ It was: ‘I saw a young boy hanged for picking up a bit of food and I shouted, “God, where are you?”’ It was: ‘There were 13,000 corpses and you could barely walk through.’ But then it was Phillip Schofield telling you how to sell your car, and Julie Walters saying you should buy your glasses from somewhere or other. Oh well. There you are. But so jarring. Perhaps I should just blame the programme because it did too good a job of bringing the horrors home? In 1945 the British Government agreed to accept 750 children rescued from Auschwitz and Belsen, of which 300 were sent to Windermere in the Lake District for a period of rehabilitation. The Windermere Children told this story as a drama, which is a good thing, as memories can’t be allowed to fade, and it all helps, but it was serviceable rather than anything more memorable. It had the sentimental, cosily nostalgic feel of, say, an episode of All Creatures Great And Small and I didn’t much buy it. It went through the boys’ issues one by one – storing food under mattresses, being scared of a whistle, the night terrors – without drawing them together in a way that allowed us to gain any sense of their unimaginable trauma.

Afterwards, on BBC4, The Windermere Children: In Their Own Words was a documentary that introduced us to some of those we had just seen played on screen, and this was considerably more compelling. Here is Jan Goldberger: ‘German soldiers came in and said to my father, “Come on, I want your son”, and my father begged with them to take him, because I’m only a little boy. But they tore me out from my father’s arms and took me away. This moment I will never, never forget.’ And we must never, ever forget, either.