There are currently three five-star dramas playing across Sunday evenings, including the second season of The Handmaid’s Tale, and our return to the totalitarian Republic of Gilead, which has yet to appear in any of those round-ups of where to go this summer, understandably. Apparently, Corfu has taken off due to The Durrells, but The Durrells offers nice scenery and donkeys and comedy Greeks, whereas Gilead offers none of these. A pity, really, as nice scenery and a donkey and a comedy Greek would certainly help it as a tourist destination, as well as lighten the mood of the place. By heavens, Handmaid’s is harrowing.

The second series has moved beyond Margaret Atwood narratively, even though she’s still involved, and people were wondering how the story might progress. We now have the answer: just as harrowingly (by heavens). We still have the painterly light and the stunning visual orchestrations – the beauty of it somehow makes it yet more disturbing – and we still have Elisabeth Moss as Offred and Ann Dowd as terrifying Aunt Lydia, and it’s same old, same old in Gilead, without even an olive grove in sight but with misogynistic sadism stretching as far as the eye can see. 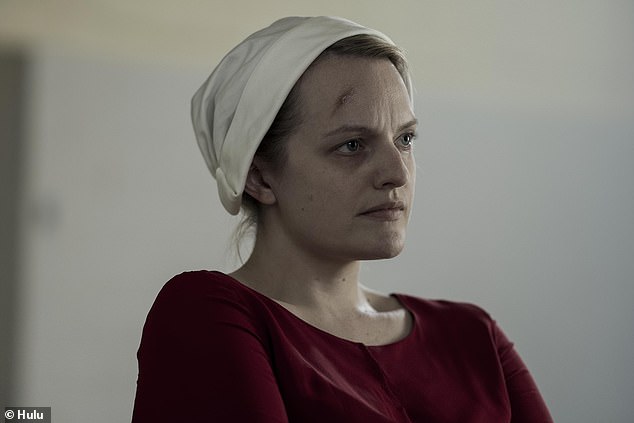 Elisabeth Moss’s incredible performance is compelling. The second series has moved beyond Margaret Atwood narratively, even though she’s still involved

The opening minutes of episode one showed Offred and her fellow handmaids being punished for refusing to stone Janine. They were muzzled, thought they were about to be hanged – the nooses were around their necks and everything, but it was only Aunt Lydia’s little joke, ha ha – plus we also saw a woman having her arm set on fire. I mostly watched with my jumper pulled up over my head. The weather being warm, it was a cotton fine knit, so I could still see, gauzily, just about, but it took the edge off. So why watch at all?

Some say they can’t any more; that it’s too unceasingly bleak and has tipped into torture porn. Fair point, but if you are going to imagine misogyny taken to the nth degree then cruelty and violence against women will have to figure. It would be a cop-out, otherwise, and cowardly. Also, it is as compelling as it is horrific. Elisabeth Moss’s incredible performance is compelling, our investment in Offred is compelling and the narrative is compelling, as hope is always laid out before us. Hope is crushed, but there is always fresh hope. Will Offred escape this time? Can we trust Nick?  Have I finished with being harrowed today? Yes, if you left it there, but not if you watched episode two of Patrick Melrose. Brilliant. But harrowing. Sunday evenings: stay in and be harrowed. Then work won’t seem so bad the next day? 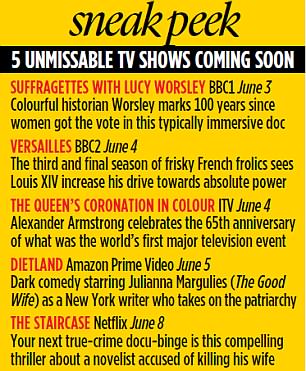 This episode, set 20 years earlier than the first, was set in a house in Provence during one hot, languid day, when the figs rotted all around, and when Patrick was a boy about to have his innocence smashed. We now know what happened  behind that bedroom door; we know what his father did to him, why Patrick became a heroin addict. By heavens, that father. Patrolling sadistically in his silky dressing gown, stubbing cigars out on flies, talking to the housekeeper until she shook, savagely controlling Patrick’s mother.

It could have been cartoonish but Hugo Weaving’s performance meant you understood he too was damaged and the damage and the rot will just go on and on unless Patrick is able to, one day, put a stop to it. This is as heartbreaking as it is harrowing, and so richly layered that if you rewatch episode one after episode two you’ll find it’s even better than the first time round.

On to A Very English Scandal, the dramatisation of the years leading up to Jeremy Thorpe’s 1979 trial for the attempted murder of his bothersome young lover, Norman Scott. Heavy, you probably imagined, and maybe even harrowing, but as written by Russell T Davies and directed by Stephen Frears, the touch is so skilfully light it whizzes along and is supremely entertaining. It’s snappy, it’s funny, it’s pacy, it’s smart, it’s wry. With Hugh Grant as Thorpe and Ben Whishaw as Scott, it did sometimes sound as if Grant were seducing Paddington, but can we choose not to go there? As it’s too weird.

The script is excellent. ‘Tell him not to talk. And not to write to my mother describing acts of anal sex under any circumstances whatsoever,’ said Thorpe, who was struggling to control Scott at the time. And the performances are delicious. Grant has been described as ‘revelatory’, which may be a step too far as he is still decidedly Hugh Grant-ish, but he isn’t one note. His Thorpe is charming yet sly, winning yet venal, while Whishaw makes Scott as poignantly troubled as he is troublesome. Blissful lesser parts, too, including Alex Jennings as Thorpe’s confidante, Peter Bessell, and David Bamber as Lord Arran with those badgers running all over the place. Joys everywhere you look, and I was not harrowed. Which was a novelty, in and of itself.