DEBORAH ROSS: Can I look from under my jumper yet?

Goodbye then, Doctor Foster, and what a way to go! I’m kidding. Bit of a whimper, the ending but, fair play, you have kept us gripped all these weeks, with your one bra – is there no M&S in Parminster? – and obsessional desire to destroy Simon, engineering sex with him just so you could say to Kate, ‘Look. He’s doing to you what he did to me. With me!’

Kate has since fled to France with their little daughter, Amelie. True, she must be ill acquainted with British child abduction laws, but she did pack a huge house into a smallish removal van overnight, so she’s not entirely without talent.

You must give her that, surely. Last week, we left you just as you were about to run Simon over. Maybe. You were in your car as he was walking to the hotel to see Tom. He was hoping he’d make it there first, which always seemed unlikely, but perhaps he is some kind of speed-walking champion and we were just never told? 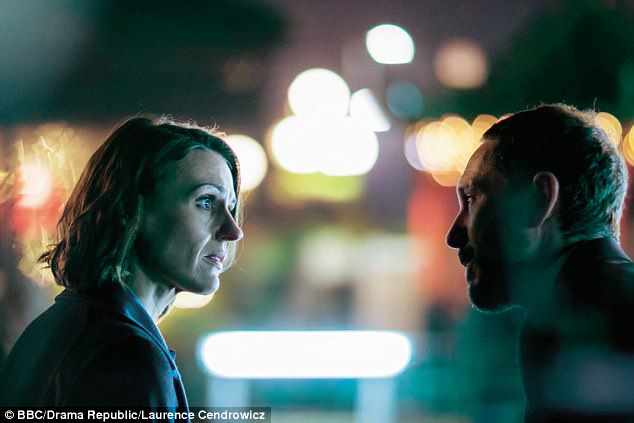 Deborah Ross writes: The writer, Mike Bartlett, has said that it’s ‘sexist’ to write you off as ‘mad’, as a man behaving in the same way would simply be deemed ‘very angry’

You revved the engine. You had that ‘wolf-bitch’ look in your eye. But at the very last minute you swerved to avoid him. You breathed again. We could all breathe again. We knew that if you did kill him, your life would be ruined, over. We always somehow stayed on your side, even though, as Simon told you: ‘We are the same.’

My editor here refers to you as ‘Dr Whack Job’, as in: ‘Are you doing Dr Whack Job this week?’ and I confess, I went along with it. ‘Yes, I’m going to be all over Dr Whack Job like you wouldn’t believe.’ But this, we now know, is plain wrong.

The writer, Mike Bartlett, has said that it’s ‘sexist’ to write you off as ‘mad’, as a man behaving in the same way would simply be deemed ‘very angry’. And he has a point. If a man, say, abducted his own son, then pretended the son was dead, stalked the son’s friends, popped up from the undergrowth to spy on his ex, had sex with his ex so he could weaponise that, had sex with his friend’s spouse for the purposes of blackmail and so on and so on, I guess you would just shrug and say: ‘Oh well, that’s men for you. Nothing to see here. Move on.’

So we get that now. We do. Sorry, Dr F. Our bad. Now, where were we? Oh, yes. You made it to the hotel first, perhaps unsurprisingly, and took Tom back to Parminster, where new people have moved in opposite so we must say bye, too, to looming Anna of the balloon wine glasses. Lucy lives there now, and she does not look like a balloon loomer, disappointingly.

You promised Tom a new kitchen, which is just what every 15-year-old boy needs after the horrific traumas he has experienced. Then Simon turned up, having speed-walked from the hotel, and you all had a set-to in the drive.

‘You’re using me against her,’ Tom told him, sobbingly. Then you had another set-to outside a Chinese restaurant. Then Tom left in the middle of the night and you found him on the bank of a dual carriageway, watching Simon down below, who was about to throw himself under a car. It was heart-stopping. Simon stepped out. Cars veered. You pulled him back. He grabbed you. Was he about to throw you under a car? I pulled my jumper right up over my face. 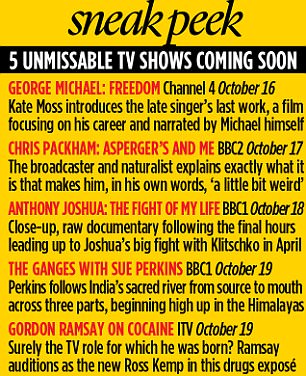 Mostly, all I could see, looking down, was my own bra, of which I have a good selection. Next thing I knew, you’d talked Simon out of it – you’d thought of a better way for him to kill  himself! – and brought him to the hotel, where you forced a Premier Inn-style full English on him, as if he hadn’t been through enough.

You laid out lethal drugs for him in the hotel room, and again, my jumper was over my head as he made to plunge the syringe into his arm, but you underwent a change of mind and came back to stop him.

Don’t do this to Tom, you said. Not now he has a new kitchen to look forward to, you could have added, just to rub it in, but you were uncharacteristically reticent here. Then you returned to your car and Tom was gone, having left you a message saying he was leaving, and never coming back.

The narrative then slipped, somewhat lazily, into montage: the police; the Missing Person posters going up, you returning to work. Really? Given your uncontrollable persistence, wouldn’t you now be on Searching Leave, just as previously you were on Stalking Leave? Quite hard to buy, that.

And lastly it was you, speaking to camera from your doorstep. ‘In the end, all I can say is that I’m here, Tom. I’m your mum. I’m sorry.’

Bit late for that, Dr F, but we thank you for the past five weeks, and for being so ‘very angry’, and if there’s not an M&S in Parminster, maybe there’s one in the next nearest town?