DEBORAH ROSS: Chaos. Drugs. But one of the best series I’ve ever watched

I May Destroy You

Cursed is the latest fantasy series from Netflix, and you could say I did the opposite of binge-watch, in that I scarcely made it through the first episode (of ten). I barely watched. Looking for a new series to barely watch at the moment? This could very well be it.

It is based on the graphic novel by Tom Wheeler and Frank Miller and is a prequel to the Arthurian legend, starring Katherine Langford as Nimue (pronounced ‘Nimway’), who will one day become the ‘Lady Of The Lake’, handing the sword Excalibur over to Arthur. It’s a tale of ‘fire’ and ‘water’, we are told at the outset, which seems hard on ‘earth and wind’ but there you are. Anyway, Nimue is one of the Fey Folk, I think – it was confusing but then I did only barely watch – and she has flashbacks (constantly) to a traumatic event involving her father, represses her ability for magic, and is treated like an outsider by her people. 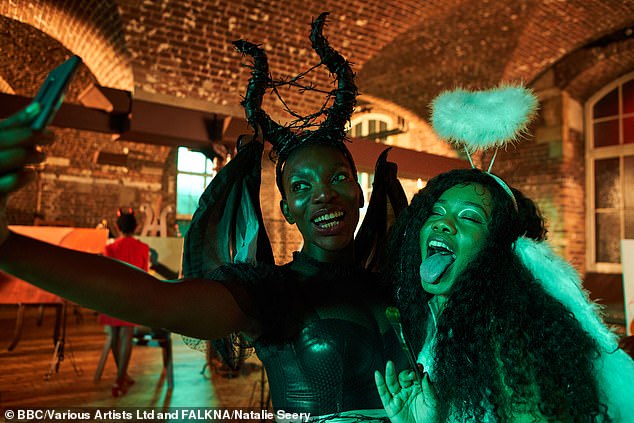 Michaela Coel and Weruche Opia in I May Destroy You. The 12-parter, which concluded this week, was created and written by Michaela Coel, who also stars mesmerisingly as Arabella

I am sure Langford who, instead of being given the appearance of an ancient Briton looks like a young woman who has spent the morning in Topshop, is a fine actor but, as with all the other actors (including Peter Mullan), they don’t stand a chance up against such a sub-Hollyoaks script with lines that, again, don’t seem especially medieval. ‘Mother will kill me!’ is typical, and also we hear ‘He fancies you!’ and ‘He’s gorgeous!’ and, down the market when perusing cloth, ‘That colour won’t work’. And everyone speaks Home Counties, aside from a few Ray Winstone types who cry: ‘I ’ate wizards!’ And: ‘Stick it to ’em!’

Set against woeful CGI landscapes, with woefully unconvincing battle scenes, this also features Sky Folk and Moon Wings and the Paladins, who wear red robes and go about burning everything down while (unconvincingly) waving their swords. There is also a drunk, half-dressed Merlin (Gustaf Skarsgard), evil King Uther (Sebastian Armesto) and a young Arthur (Devon Terrell), who is indeed ‘gorgeous’ and has an ace chat-up line: ‘Fancy an ale?’ It’s one of those series that, once you get started, you’ll find very easy to stop. That’s why it’s my barely watch of the week.

I initially swerved I May Destroy You as I knew it was about young people taking drugs and being chaotic, and as I am not young and do not take drugs and am not chaotic I just assumed I was the wrong demographic and I would find it too unrelatable as well as too stressful. But I was wrong about being the wrong demographic because, as I now know, no one is the wrong demographic. It is gasp-makingly brilliant, and one of the best series I’ve ever seen on television, and I say that having seen The Luminaries. (That’s another series for you to barely watch, right there).

The 12-parter, which concluded this week, was created and written by Michaela Coel, who also stars mesmerisingly as Arabella. Arabella is an East London writer who owes her publisher a book (stressful) and has an Italian drug-dealing boyfriend, and wakes from a night out in a bar with a gash on her forehead and the image of a man panting and thrusting in a bathroom stall. It takes her a while to realise that this is a memory: her drink had been spiked and she was raped. Coel was writing from her own experience of sexual assault, and that trauma runs throughout, but also Arabella has to carry on living life as best she can, as what other option is there?

Arabella has her best friends, Terry (Weruche Opia) and Kwame (Pappa Essiedu), who are also complex and multi-layered and experience their own issues around consent. Most on-screen narratives are linear, with a protagonist who will get from here to there, but this showed that life is distracting and takes many messy, unpredictable detours, which isn’t as alien to me as you might think – indeed, sometimes my Ocado shop may contain ‘substitutions’, which can throw me completely – and it was packed with terrific moments. Some were unbelievably heart-breaking (Arabella’s final visit to her Italian boyfriend) and some were unbelievably tender (Kwame asking for a hug), and some were wonderfully funny, as when Terry asks Arabella how she is going to pay back her book advance: ‘I don’t know, Terry. That’s why I’m crying.’

You believed in everyone 100 per cent, and also related to them 100 per cent – all the performances were superb – and the final episode was spectacularly audacious, playing with all the ways Arabella might achieve some kind of closure. What would she do if she were to encounter her rapist again? Kill him? Give him a taste of his own medicine? Lovingly therapise him?