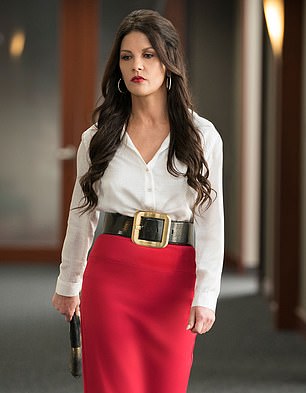 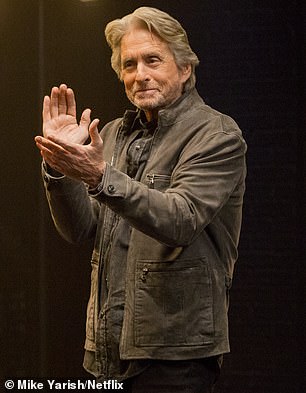 Split screen: Catherine Zeta-Jones and Michael Douglas both play older people in worlds where youth and beauty are still paramount

The Kominsky Method stars Douglas as Sandy Kominsky, who once had a moment as an actor but is now an acting coach, and Alan Arkin as his best friend and agent, Norman Newlander. It’s about men growing old in LA, and raging and still getting into trouble, so it’s quite Curb Your Enthusiasm-ish, but it’s less shouty, goes deeper, feels truer. This isn’t to say it doesn’t contain some terrifically funny lines. ‘How’s your girlfriend?’ Norman asks. ‘No more,’ says Sandy. ‘We didn’t have a great deal to talk about. She was half my age.’ ‘She was half your age and still an old woman,’ counters Norman. I laughed.

They know their golden age is done, and it hurts. The young women whom Sandy would once have easily chatted up in bars now roll their eyes. Sandy can’t sit on a playground bench without mothers looking at him warily and scooping up their children. These men are old enough and wise enough to recognise their stupidity and fears and mistakes and laugh at them but still desperately want to feel young. Their friendship is touching, even if they have the most terrible falling-outs, and it does feel typical of those male friendships where you can be close without ever discussing emotions specifically. ‘We’re civilised people, we keep our suffering to ourselves,’ says Norman at one point. ‘Where it belongs, sure,’ confirms Sandy.

It also has heart as well as emotional power. Norman’s wife dies and his speech at her funeral, after the male Barbra Streisand impersonator has sung, was extraordinarily moving. It took some skill to segue from one to the other without jarring. Norman can’t talk about his grief, but when he breaks down in the dry cleaners because there’s this dress his late wife never picked up, we understand his pain.

As for the performances, wonderful on both counts, but Douglas is especially mesmerising. Douglas has always played alpha roles, even sexual predators, yet here we’re seeing him as an old fella with a prostate that’s playing up, so along comes a hilarious Danny DeVito (playing urologist, not himself, just so we’re clear) to stick a finger where the sun don’t shine. And it’s worth it just for that, surely. 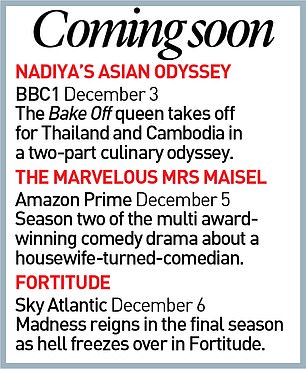 I planned only to watch a couple of episodes of Kominsky but ended up watching all eight, while a couple of episodes of Queen America was more than enough, thank you very much. Zeta-Jones plays Vicki Ellis, a former beauty queen who now grooms future beauty queens and who may go down as one of the most unrelatable TV characters of all time. This is meant to be a satire, I think (hard to say), but Vicki simply comes over as gratuitously cruel. She has a niece (it will turn out to be her daughter) who is overweight and Vicki is gratuitously cruel to her. The scene where she takes her shopping and nothing will fit is completely horrible.

This is aiming for Ugly Betty in tone, I think (again, hard to say), but has none of those smarts. The script has people endlessly telling others what they would already know. Would Vicki’s best friend need to tell her how they became best friends? Would Vicki’s sister need to tell her why she raised her daughter? Vicki will come to see the error of her ways, that much is clear, but there is nothing to keep you watching, not even Zeta-Jones’s performance. ‘Broad’ is the nice way of putting it but ‘chewing the scenery’ says it better.

On to the John le Carré adaptation, Little Drummer Girl, which I said at the outset would be a critical success but not a popular one, and that I’d eat my hat if at least a million viewers hadn’t dropped away after episode one. And? It launched with 5.2m viewers, dropped to 3.8m for episode two and dropped even further (2.9m) for episode three. It’s not just that it’s overly labyrinthine, it also lacks any tension or drama or pace. We’re up to episode four and Charlie has only just infiltrated the Palestinian brotherhood. I’m sticking with it because I’m too far down the line but am not surprised others have fled. And remember: you read it here first.