DEBORAH ROSS: Oh, Dr F! Come back and save us from Liar

An Hour To Catch A Killer With Trevor McDonald

A grim week, one way or another. Our beloved Dr Foster is, sadly, on our screens no more, as she waits in Parminster for Tom to come home and for series three. So, no ‘wolf-bitch’ to look forward to on Tuesday nights while, elsewhere, it was Liar, which is horrible, and Louis Theroux’s Dark States, which was über-dark, and a true-crime investigation with Trevor McDonald that did not feature much Trevor McDonald but did feature a young woman whose throat was cut. Happy days, as they say.

Liar, which started as a straightforward He Said/She Said rape drama, and concludes this week, has not only gone full-on vigilante but has dismayingly strayed into The Fall territory. Watch out, women, it’s telling us, and don’t even think you’re safe in your own home, where you may well be drugged and raped. 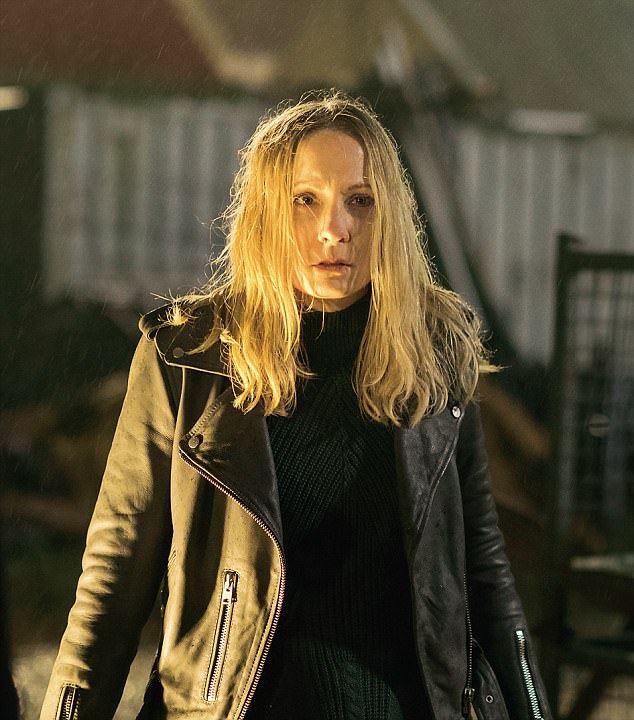 Joanne Froggatt in Liar. Liar, which started as a straightforward He Said/She Said rape drama, and concludes this week

Plausibility issues aside (So, Andrew is a heart surgeon, but also super-skilled at breaking and entering? As a junior doctor, did he study that while on rotation?), the drama knows it is exploiting rape for entertainment. This week, Laura drugged Andrew, tied him up at a deserted quayside warehouse, then gave him a speech about what rape does to women.

‘There are so many women and girls who have been through the same thing and so many of them weren’t believed because unless you are screaming, you mean “yes”, right?’

This felt like what it was: something the writers (Jack and Harry Williams) thought they ought to include to show they are on it, even though they so clearly aren’t. Almost immediately it was back to business as usual as Andrew worked himself free and terrifyingly chased Laura around the dark, desolate harbour as we were, in effect, forced to join in as voyeuristic accomplices. And one last remark: has Laura given up teaching? Or is she on Vigilante Leave?

Just a few minutes into Louis Theroux: Dark States – Heroin Town and I already wanted not to watch.

Television should take us where we don’t always wish to go, of course, but if we don’t wish to go there, how is that going to work? I made it to the end because I made myself make it to the end, but I’m still not convinced it was worth it. 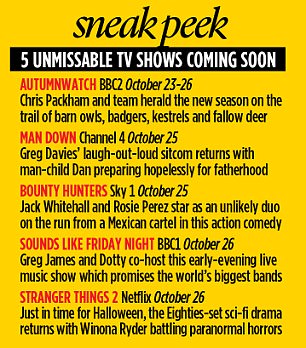 Theroux met the addicts of Huntington, West Virginia, a formerly heavily industrialised town now on its knees, with one in four adults addicted to opiates. We met Nate, living down by the river and shooting up into the scab on his arm; and Katillia – oh God, Katillia – who we thought had a boyfriend to look after her, but he turned out to be her dealer, given to bloodying and breaking her nose; and also Archie, newly born but kept in hospital for ten days to help wean him off the methadone. (Oh God, Archie.)

Louis performed his awkward Englishman shtick as they opened up about their sad lives, but you did get the feeling it wouldn’t have taken much for them to open up about their sad lives. Who else is taking much of an interest, after all? And, ultimately, it felt touristic, not just because Louis watched on dispassionately as, say, the camera lingered on Nate shooting up into his scab, but because it never properly examined why the problem was so widespread, or taught us anything about that.

OK, it started with strong prescription painkillers which, we were told, were dished out to cope with workplace injuries when the town was still a working town. And then kids started stealing the painkillers from their parents, but why? Do kids normally steal prescription drugs from their parents? What was going on? And also, was this guilty of magical thinking? That is, thinking the addicts lives would be fine if only they weren’t addicted? Would they? Be fine?

Essentially, I would question the value of being taken to dark places if you are not asked to understand those dark places. Next week? Sex traffickers. I can’t wait. Can we squeeze in Trevor McDonald, whom I’ve so stupidly left till last? Not that An Hour To Catch A Killer With Trevor McDonald was especially concerned with Trevor McDonald who, beyond introducing it, barely figured, and may have been entirely unnecessary.

This followed the homicide detectives from Northumbria Police, who started filming themselves the minute the call came in about a woman who had just been discovered with her throat slit in her Gateshead bathroom.

With the police wearing body cameras, we then followed not just the first hour – known as ‘the golden hour’ for collecting evidence – but the full investigation. There was only one suspect but the police had to prove he did it. They used CCTV. They used number-plate technology. They plotted his movements via phone masts. It was just like you see in crime dramas, except this wasn’t one. And it was gripping. If you missed it, catch up. Do.