Deborah Ross on Insatiable: ‘Is it satire? Or just terrible writing?’

Before it was even broadcast, the new Netflix series Insatiable received fierce criticism for ‘fat shaming’ based on its trailer alone, but I quite liked the sound of it. It’s the story of a fat girl who becomes thin and beautiful and exacts revenge on all those who had humiliated her, and I was thinking of The Life And Loves Of A She-Devil, which was a wonderful revenge drama. (Remember? Starring Julie T Wallace and Patricia Hodge and based on the Fay Weldon novel?)

So I came at this quite enthusiastically but can now tell you that ‘fat shaming’ is actually the least of Insatiable’s problems. Or to put it another way, it’s wrong on so many levels it all but runs out of levels to be wrong on. True, I’ve only watched the first episode and should at least watch a second, and maybe I will, but only if someone were to hold a gun to my head or to the head of a loved one or even my goldfish, Bubbles. (Bubbles doesn’t bring much to the party, yet I am fond of him all the same.) 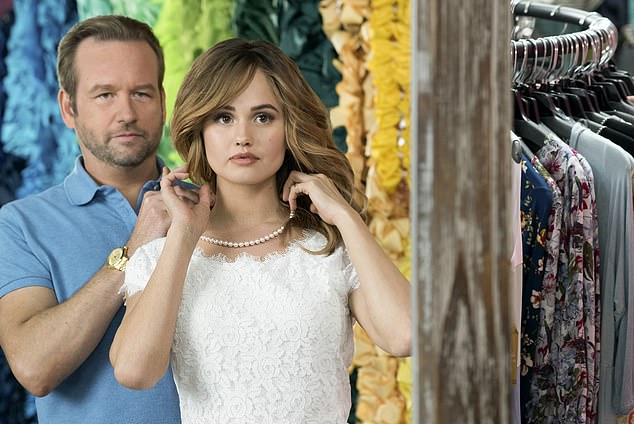 Dallas Roberts and Debby Ryan (as Patty) in Insatiable. The basic premise is absolutely that Patty was a loser until she became thin

The basic deal is this: Patty (Debby Ryan, initially wearing a fat suit) is a fat 17-year-old known as ‘Fatty Patty’ and she’s scorned by her peers, but then a homeless man punches her in the face and breaks her jaw. As a result, she has to have her jaw wired, can’t eat, loses all the weight, becomes gorgeous. I don’t know what lesson we are meant to take away here. That homeless people are violent? That men hitting women can have its upsides?

As it is, the basic premise is absolutely that Patty was a loser until she became thin, so thank God for the homeless man who punched her in the face. I might even go out later, to see if I can get a homeless man to punch me in the face and make me gorgeous (fingers crossed). This is not, in short, like the drama series Dietland (also on Netflix), where the central character, Plum (Joy Nash), is fat and a woman who is wholly entrancing and compelling in her own right. The plot became very silly, yet Plum was always a delight.

But back to Insatiable, if we must. The other main character is Bob (Dallas Roberts), who is a lawyer by day and a pageant coach by night, and in the first episode a woman who is upset that her daughter didn’t win a pageant falsely accuses him of molesting that daughter. And  what’s the lesson here? Women are given to making this stuff up? Also, there’s an older woman who is a cougar, naturally, and there are jokes about cancer – I believe anything can be funny so long as it’s funny. These jokes weren’t funny – and as for Patty, she is so morally bankrupt she gets a guy to change his testimony in court by leading him on and also plans to get her revenge on the homeless man by sleeping  with him, then rejecting him. And we’re meant to be rooting for her? Really? 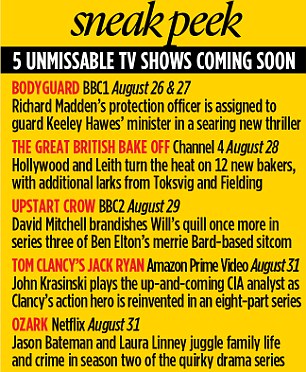 Tonally, this is like being on a waltzer at the funfair as it twists at breakneck speed, trying to be comic one moment, tender at another, and not succeeding at either but giving you whiplash all the same. The writer (Lauren Gussis) has said it’s satire, but if it’s satire it’s bad satire. When Patty is reminded that Bob has been accused of child molestation, and she responds with, ‘Good. That means I’m in with a shot,’ is that satire? Or just terrible writing?

I would also point out that although we are meant to think of Bob as innocent, isn’t his grooming of girls for pageants both creepy and predatory? I will not be watching another episode unless a gun is held to my head or the head of a loved one or Bubbles. And if it came to it, Bubbles could probably go.

Now Jamie Cooks Italy, although not literally as he’d need an extraordinarily big dish for that. In the first episode of Jamie Oliver’s latest series he visited the Aeolian islands north of Sicily, where the produce is lush, the sea is azure and Italian grandmothers (nonnas) shared their favourite recipes.

Here was Nonna Francina, 92, who still runs a caper farm, showing him how to make stuffed squid sewn up with a needle and thread. And here was Nonna Marina, preparing rabbit two ways. The fact is, I could have watched the nonnas all day, but the programme was interrupted by Jamie showing us how to make knock-off versions – chicken instead of rabbit, griddling the squid instead of stuffing and sewing.

In other words, making something inauthentic from something authentic, which may, I couldn’t help thinking, be why his restaurant chain, Jamie’s Italian, is fast going down the tubes. Obviously, if the show excised Jamie then it wouldn’t be a Jamie show, but maybe someone could make a programme that’s just wall-to-wall Italian grandmothers? Please?