DEBORAH ROSS: Ten stars for Fleabag… and that’s out of five!

I suppose Phoebe Waller-Bridge writes at a keyboard, much like everyone else, but in my mind’s eye I see her poised over a piece of paper, carefully scratching down each word with a scalpel dipped in ink. It is that precise. It is extraordinary writing. It is extraordinary writing of the kind that makes you wonder why anyone else even bothers and doesn’t just jack it in and go stack shelves in Tesco. It is warped yet affecting. It is filthy yet elegant. It is funny yet painful. ‘Hands off my miscarriage. It is mine.’ How do you write a line like that, so it’s painful yet funny, if not with a scalpel?

This is the much-anticipated second series of Fleabag, created by Waller-Bridge, who also stars. (She wrote Killing Eve too, which also made you think you’d be better off stacking shelves.) The show is, ostensibly, about a single woman navigating sex and relationships and family, while often being her own worst enemy. The first episode of the new series opened with Fleabag (we never learn her true name) standing in a restaurant bathroom with a bloodied nose. How did we get here? 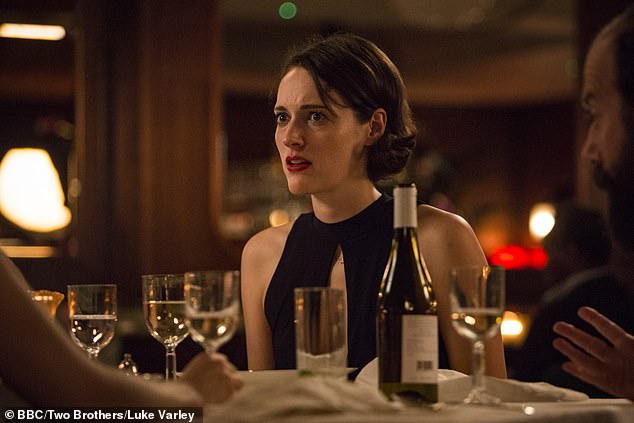 Fleabag is about a single woman navigating sex and relationships and family, while often being her own worst enemy. Phoebe Waller-Bridge writes and stars in the show

We spool back in time to the preceding dinner, held to celebrate the engagement of her useless father (Bill Paterson) to her godawful godmother (Olivia Colman, the cast is top notch). Also at the table is her tense, brittle sister Claire (Sian Clifford) and Claire’s odious husband (Brett Gelman), whom we last saw making a move on Fleabag, but then managing to convince Claire it had been the other way around. The sisters obviously haven’t spoken since. Plus, there’s the ‘hot’ Catholic priest (Andrew Scott) who will be conducting the wedding ceremony and doesn’t speak to his brother, a long-distance lorry driver. Why? Because he doesn’t go to church? ‘He’s a paedophile,’ he answers, before adding: ‘I’m aware of the irony of that.’ Genius.

Fleabag is still breaking the fourth wall and whispering quips from the corners of her crimson-lipsticked mouth. ‘Putting pine nuts on your salad does not make you a grown-up,’ says her sister. ‘Does,’ she tells us. She is transfixing, like an old-style Hollywood femme fatale, and wearing a jumpsuit, which was transfixing in and of itself. How does she not fall out of that, I kept wondering. (I’ve since learned you can get a special kind of tape; interesting.) 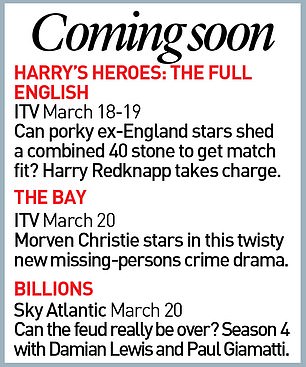 This was your dinner-party-from-hell scenario, but raised from the commonplace into art, if you like. It was 30 minutes of ten-star perfection as noses were bloodied and Claire suffered that miscarriage, which Fleabag then had to claim as her own (so there was an element of farce, too). Fleabag has often behaved badly, but we feel for her because all she wants, really, is to be accepted by those she loves. When her father, having missed her birthday, gives her an envelope, she opens up like a flower, but when it’s revealed the gift is a voucher for a counselling session, she  withers and dies. Nothing is said. But you know it. Because it is written. With a scalpel.

The other big event of the week was MotherFatherSon, the new eight-part political/ psychological thriller scripted by Tom Rob Smith (London Spy, The Assassination Of Gianni Versace) and starring someone or other. Hang on. The name will come to me in a minute. Oh yes, Richard Gere in his first TV series for 30 years. I don’t know why the BBC didn’t milk that more in its pre-publicity. As it stands, Helen McCrory wipes the floor with him anyhow.

In a nutshell: Max (Gere) is the bullying US media mogul whose UK operations are run by his self-destructive, cocaine-addicted son Caden (Billy Howle). As of yet, it’s hard to know what this is about exactly, as so many plot seeds were sown. A general election is approaching. A mother is leaving anguished voicemails on her missing daughter’s phone, and these are being intercepted. Meanwhile, Max’s ex-wife, Caden’s mother (a terrific McCrory), works in a homeless shelter and may be about to get it on with Sexy Homeless Guy.

This is all shiny cars and shiny private jets and shiny surfaces, but why we are meant to care I don’t yet know. There were a couple of fascinating scenes – including an incredibly unsettling sex scene – but the script often didn’t ring true. ‘You believed in this paper once,’ said Caden to a departing reporter. ‘I believed in something. It just wasn’t you,’ she replied. And who would speak like that, really?

As for Gere, he was more wooden than the tree I can see from my window as I tap away on my keyboard, when I should probably be stacking shelves. His scene with the prime minister, when he tried to intimidate him over the matter of shortbread v fruitcake, was so stilted and false I actually cringed. Still, this may have legs, and the shock event at the end may lead us somewhere more involving. That’s the hope, anyway.