DEBORAH ROSS: Unbelievably gripping – I had to watch it all

DEBORAH ROSS: Unbelievably gripping – I had to watch it all

I thought I would watch the first episode of Unbelievable, just to get the measure of it, but eight episodes and eight hours later I came out blinking into the light, except it wasn’t light as it was nightfall by then. I had cancelled plans. The dog had not been walked. I abandoned the shows I should have been keeping up with, like ‘Silly Sanditon’, as it’s known in our house. I had to know what happened. I had to know if Marie was vindicated. One more, one more, one more…

Yes, Unbelievable is a crime series and, yes, it’s a rape crime series and we are up to here with rape crime series, are we not? (Liar, Broadchurch etc.) But this is based on true events and it is excellent and insightful and important – should male detectives even be allowed to investigate rape? – and also works as a straight-up taut, gripping thriller. Poor dog, who had not been walked, but it had to be done. Had to. 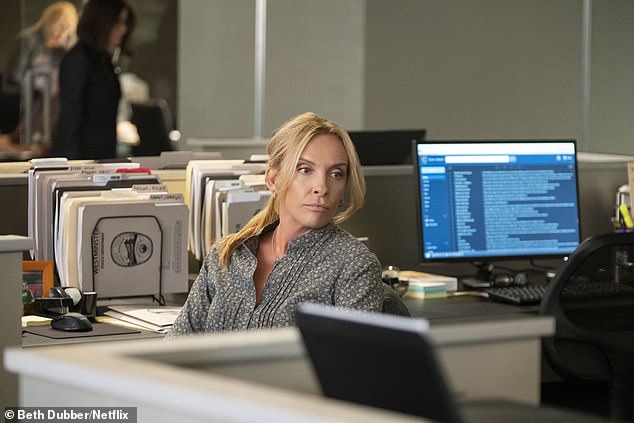 Must watch: Toni Collette in Unbelievable. I thought I would watch the first episode of Unbelievable , just to get the measure of it, but eight episodes and eight hours later I came out blinking into the light

The story is two stories running mostly in parallel. First, there’s Marie (Kaitlyn Dever). Marie is an 18-year-old from Washington who is raped by a masked intruder. The detectives, who are male, make her recount the experience over and over even though it is so horrific she can barely process it. When she can’t recount what happened in the exact same way every time, and because they pull her file and discover she has lived in many foster homes, they decide she isn’t telling the truth and put pressure on her to retract her statement, which she does. This is enraging and painful but at no point did I say you were in for an easy watch.

The second narrative strand involves two women detectives, Duvall (Merritt Wever) and Rasmussen (Toni Collette), investigating similar cases in Colorado a couple of years later. Here, the women who have been raped are treated with unfailing humanity – they are never made to tell, then re-tell their stories – as the two hunt the perpetrator down. Rape is a physical act but it’s not just the physical act. It steals something from women that cannot be reclaimed. These detectives need to get whoever is doing this off the streets now. Their investigation is dogged and obsessional and fascinating and in the meantime we never lose sight of Marie, whose world has fallen apart now she is known as a ‘liar’. I also never said it wouldn’t be a heartbreaking watch. 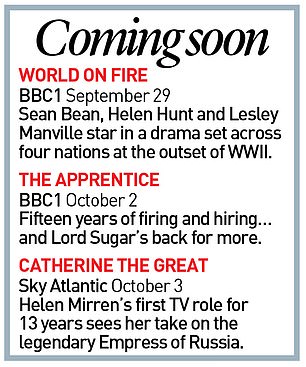 This is excellently performed. Collette and Wever are, quite simply, great together, while Dever plays Marie with tremendous nuance and delicacy. This is, in fact, a much more nuanced series than I could ever convey here, with a denouement that is not unsympathetic to the male detectives we’ve met en route. It just shows that the way they come at the world makes them tone-deaf to what a rape victim might be going through. Many women do not report sexual assaults and after seeing this you will understand why. Please, please, please, please watch.

Japan With Sue Perkins seemed shallow and strangely off from the start. It opened with Perkins standing on Tokyo’s teeming Shibuya pedestrian crossing, as shown in every documentary made about Japan, ever, and saying, ‘Welcome to Japan… the birthplace of Zen,’ which was odd as Zen comes from China. So what she should have said was, ‘Welcome to Japan, not the birthplace of Zen, as it originated in China during the Tang Dynasty and only later spread to Japan.’ Probably best to forget Zen altogether as it doesn’t make sense. And the programme carried on being annoying thereafter.

Perkins covered sumo, salary men, a Shinto ritual, a family with a robot dog. Fine, but nothing we haven’t seen before, and nothing that gets its hands dirty. I lately saw the cinema film Shoplifters (by Hirokazu Koreeda) about a family who live in poverty in Tokyo and was shocked there even was poverty in Tokyo. (I thought everyone had a toilet that looked like the deck of the Starship Enterprise.) So why don’t we ever hear about that? Why couldn’t we be offered something that went beyond the stereotype?

But most upsetting was her look at the girl pop bands – there seem to be thousands of these bands – whose audience is exclusively male and middle-aged. The band members, who are all in their late teens and early 20s, dress as schoolgirls, but Perkins was not worried. She said she was struck by the ‘respect’ and humanity’ on show from both audience and performers, while I was thinking: Really? You don’t think this normalises the sexualisation of children, which is a problem in Japan? (See Shoplifters and also the Stacey Dooley Investigates… film). But nothing, not a dicky bird. She just happily banged light-sticks with a man who looked like a Japanese Ken Dodd and laughed with him about his wife, who likes to stay home and do jigsaws. True, this is a travelogue and not Panorama. But young women dressed as schoolgirls for middle-aged men? Come on.