‘What is wrong with people?’ Mystery surrounds a decapitated crocodile found floating down an Outback river without its tail

A crocodile has been spotted floating down a river with its head cut off.

Mick Jerram spotted the decapitated animal at the Crystal Rapids river in Katherine in the Northern Territory earlier this month.

Gruesome photos of the crocodile were posted to Facebook, showing the ‘butchered’ beast with its head cut off and its tail missing.

‘What is wrong with people?’ one woman commented on the post.

While there was no definitive explanation as to what killed the crocodile, Mr Jerram wrote that it had been ‘definitely butchered’.

A crocodile expert from Charles Darwin University said that it was likely someone killed the animal to keep the head as a souvenir.

‘I’ve seen this kind of thing a lot over the years,’ Adam Britton told Yahoo News.

‘Occasionally people will find a dead crocodile and souvenir the skull, but often the animal was deliberately or accidentally killed (for example by drowning in a net).’

Mr Britton said that people could only hunt crocodiles if they had a permit, but many were doing it illegally.

‘There aren’t many genuine reasons why you’d cut the tail tip off and leave it either, maybe they changed their mind about throwing it on the barbecue?’ 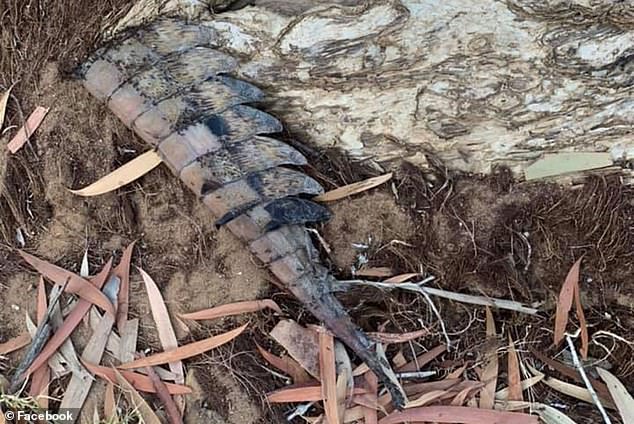 NT’s Department of Tourism, Sport and Culture are investigating the issue which could see the person responsible paying up to $77,500 in fines or five years in jail.

Another was found just last week at Mount Isa’s Lake Moondarra with its head cut off, prompting a Queensland police investigation.

Mr Britton believes the species are being illegally targeted by ruthless animal hunters.