Declassified cold war photographs taken by American U2 spy planes that flew over the Middle East in the 1950s and 1960 have revealed previously hidden archaeological sites.

The black and white photographs, released by the CIA, show a range of areas of ancient importance, ranging from sites along the Nile in Egypt to the city of Allepo in Syria and the Assyrian city of Nimrud in modern day Iraq.

The images have revealed details including prehistoric mass-kill hunting traps in eastern Jordan, irrigation systems of the Neo-Assyrian Empire in northern Iraq, and marsh communities in southern Iraq.

Declassified cold war photographs taken by American U2 spy planes that flew over the Middle East in the 1950s and 1960 have revealed previously hidden archaeological sites. This image shows the Syrian city of Allepo before war ravaged it 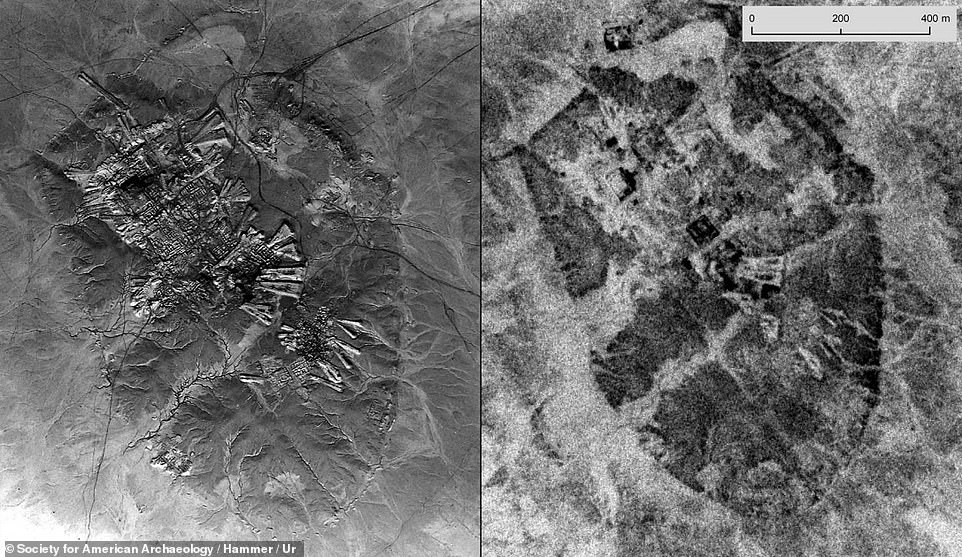 Experts Emily Hammer and Jason Ur built their own index of the U2 imagery and selected film rolls from the National Archives’ storage centre in the of Kansas. This image shows Ur, an important Sumerian city-state in ancient Mesopotamia, located at the site of modern Tell el-Muqayyar. The left image was taken by U2 in 1959 (left) and a spy satellite in 1968 (right)

Researchers from the University of Pennsylvania and Harvard University used the images, taken from 70,000 feet (13.2 miles / 21km) above the Earth.

The photographs were taken during a mission code-named CHESS and were declassified in 1997, but weren’t digitally scanned or indexed, according to Gizmodo.

Experts Dr Emily Hammer and Professor Jason Ur built their own index of the U2 imagery and selected film rolls from the National Archives’ storage centre in the of Kansas.

This included thousands of high and low-resolution negative frames, covering thousands of feet of film, which the pair poured over in detail using a light table.

They then took photographs of the negative using a a 100-millimetre macro lens and stitched them together and used computer software to find out where in the world they were taken.

‘As you turn the spool of a film roll following the path of the U2 plane, you may not know exactly what you’ll see in unfamiliar places, so there’s often a sense of exploration and discovery,’ said Hammer in a statement. ‘Other times, the pilots were flying over regions I knew by heart from travel and study, and I would almost hold my breath, hoping that the plane had veered just a little to the right or left.’

To which she added: ‘The photos provide a fascinating look at the Middle East several decades ago, showing, for example, historical Aleppo long before the massive destruction wrought in the ongoing civil war.’ 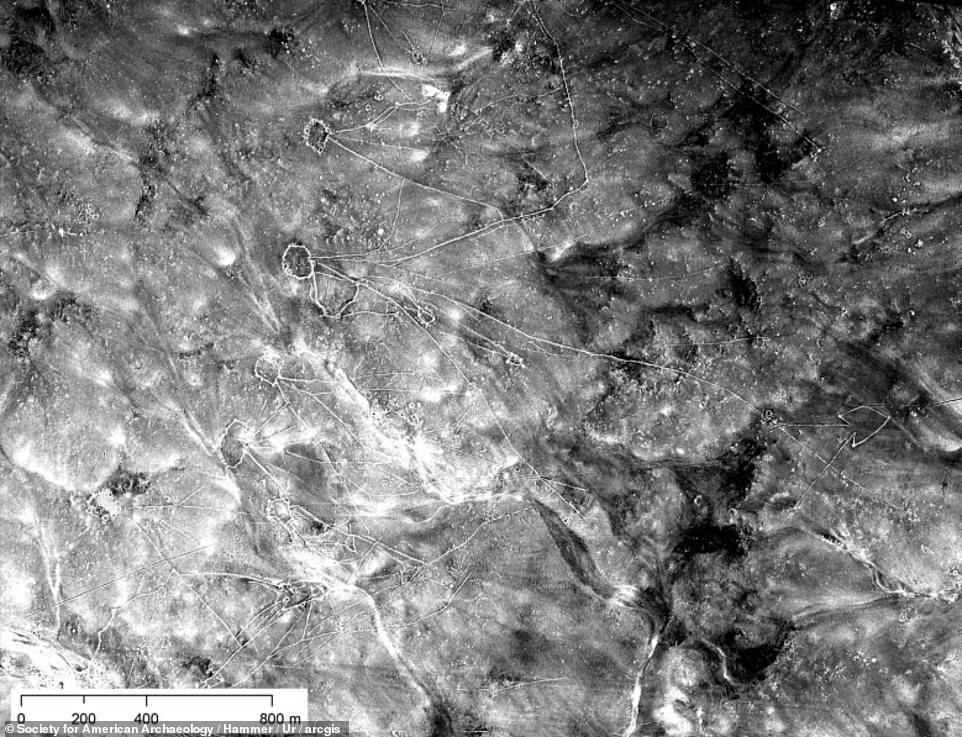 The photographs were taken during a mission code-named CHESS and were declassified in 1997, but weren’t digitally scanned or indexed. Chains of desert kites as visible in U2 imagery from missions in 1554 and 1960

The picture shows aerial views over the black basalt desert (harra)  an the hundreds of huge stone-walled constructions called ‘desert kites’ which are believed to be mass-kill hunting traps for gazelle and other animals like giraffes and pigs.

These were constructed by communities that ranged from Neolithic and Chalcolithic as well as Early Bronze Age communities inhabiting the harra.

In addition, other stone-walled features such as villages, corrals, and circular structures that resemble wheels can also be spotted.

A Chinese researcher who viewed U2 images of his hometown taken during the Cold War was the inspiration for the project.

Hearing abut their success, Dr Hammer and Professor Ur decided to conduct their own study to see if the previously classified data could reveal anything of academic importance.

One result of their index was to reveal unprecedented details of desert Kites in Eastern Jordan.

The resulting index allowed the scientists to take an unprecedented look at desert kites in Eastern Jordan.

These stone structures were used to trap prey by ancient hunters between 8,000 and 5,000 years ago.

Their images reveal the damage sustained to the structures since the images were taken. 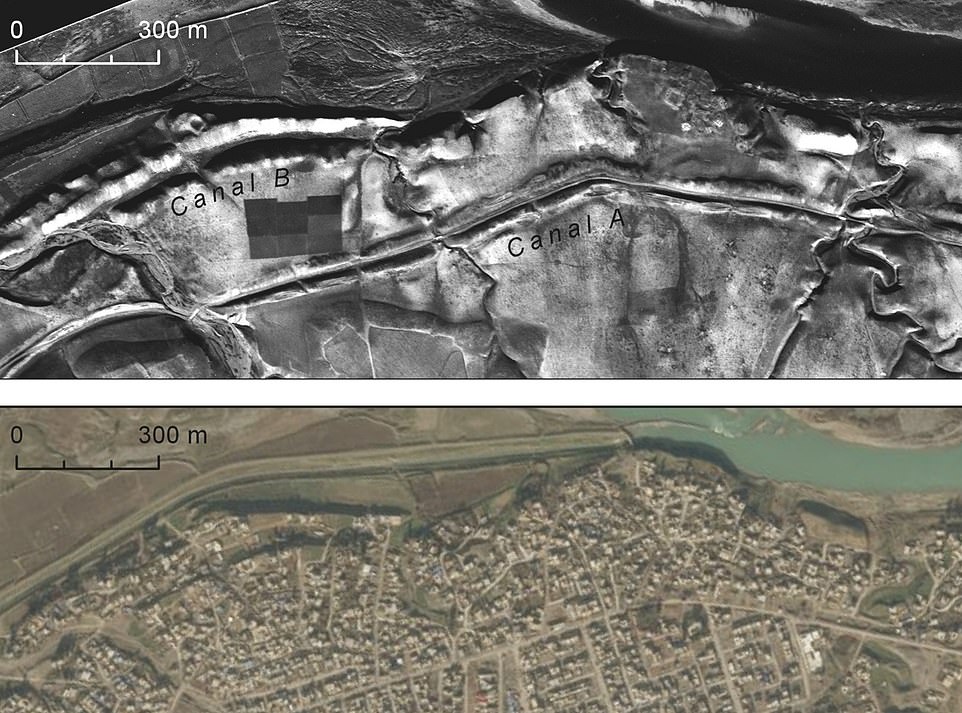 The black and white photographs, released by the CIA, show a range of areas of ancient importance. This image shows the remains of canals (top picture) dating to the Sasanian era in early first millennium AD (Canal A) and the Assyrian Empire (Canal B) in northern Iraq above the city of Nimrud taken in the 1960s

The photo showing ancient canals in northern Iraq above the Assyrian capital city of Nimrud taken in the 1960s.

Features such as Assyrian canals, tunnels, and sites at the Negub canals and site on the right bank of the Upper Zab River can be seen.

The earliest known canal in this region led from the Khazir River to Nimrud city, which was the imperial capital at the time.

The open canal was chiselled into the side of the river terrace but also cut through it via two tunnels.

‘We were able to map many features that have been destroyed since 1960 and are no longer visible in modern imagery,’ the authors wrote in the study.

‘This is particularly true for villages, corrals, and wheel structures, which are smaller than desert kites and more vulnerable to total erasure by modern agriculture and development.’

The pair also studied canal systems dating back to the ancient Assyrians in what is now northern Iraq.

The full findings of the study were published in the journal Advances in Archaeological Practice. 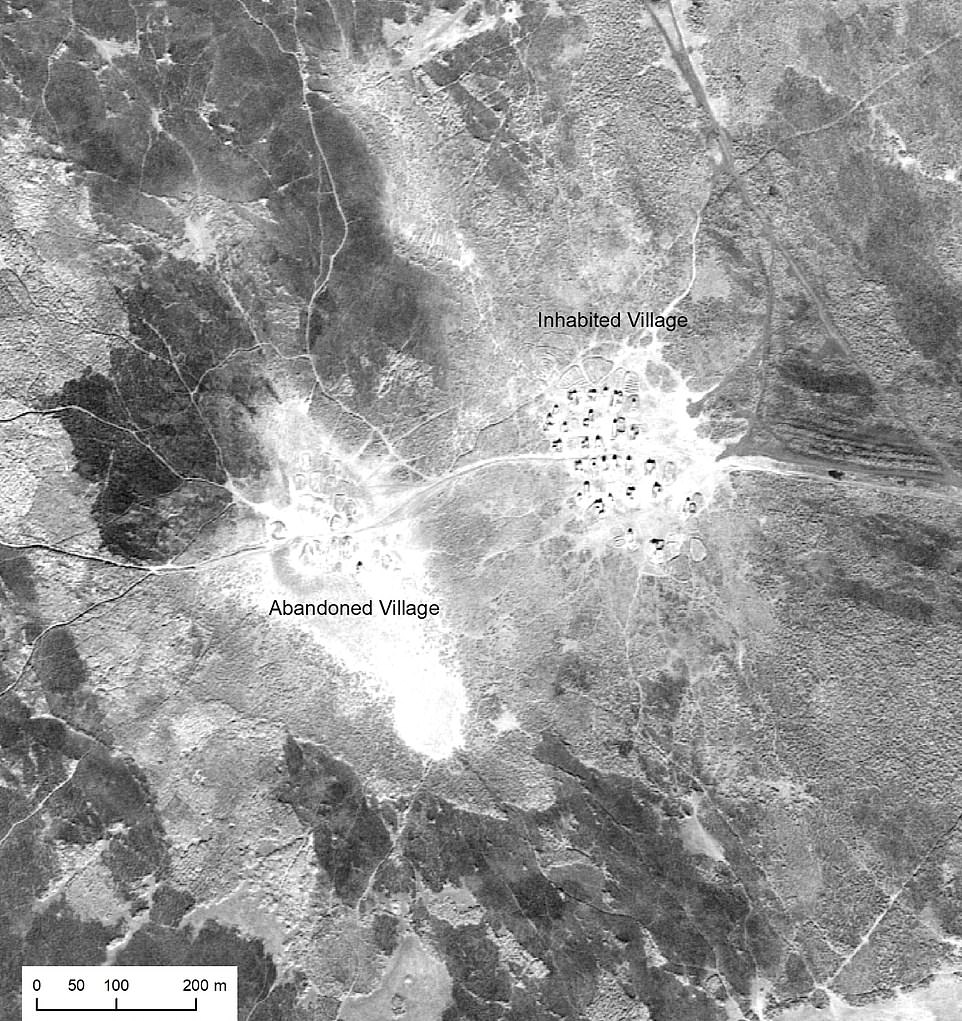 Researchers from the University of Pennsylvania and Harvard University used the images, taken from 70,000 feet (13.2 miles / 21km) above the Earth. An inhabited and adjacent abandoned Marsh Arab village in the Central Marshes of southern Iraq, U2 mission 1554, January 1960

Roughly 280 km2 of the Central Marshes covered by U2 mission 1554 in January 1960, there are 43 marsh villages, including inhabited and abandoned villages.

Abandoned villages with visible structures are likely to have been more recently abandoned than other abandoned villages that are identified only by means of their elevation above the water and their position within a network of radiating paths through the marsh.

Two of the four recently abandoned villages and three of the more distantly abandoned ones are directly beside currently inhabited villages that are larger than the abandoned ones, indicating that marsh villagers tended to produce ‘horizontal stratigraphy’ rather than resettling on top of existing villages

. Villages tend to preferentially be located on ‘fingers’ of higher ground that extend into the marsh from its edges, providing easy routes in and out of the marsh. This is especially true of villages located on the eastern edge of the marsh, nearest to the river.