‘Deep ocean’ water will warm by a further 0.36°F in the next 50 years, scientists predict

‘Deep ocean’ water more than 2,300ft below the surface will warm by a further 0.36°F in the next 50 years as it continues to absorb ‘excess heat’ created by humans, scientists predict

The deep ocean could warm by a further 0.36°F (0.2°C) in the next 50 years, as it continues to absorb the vast majority of ‘excess heat’ created by humans, a new study warns.

Oceans have already absorbed about 90 per cent of the warming caused by humans since the Industrial Revolution began.

Deep-sea plants and animals which depend on oxygen may no longer be able to survive, and the change will also affect the sea’s currents and chemistry.

Much of the ‘excess heat’ stored in the subtropical North Atlantic is in the deep ocean, below 2,300ft, new research suggests.

Images in the wake of violent coastal storms often focus purely on the damage caused to beaches, dunes, property, and surrounding infrastructure.

However, these extreme weather events could help offset erosion to beaches caused by rising sea levels, by pulling up vast quantities of sediment from the ocean floor and depositing it along retreating shorelines.

‘As our planet warms, it’s vital to understand how the excess heat taken up by the ocean is redistributed in the ocean interior all the way from the surface to the bottom, and it is important to take into account the deep ocean to assess the growth of Earth’s “energy imbalance”,’ said Dr Marie-José Messias, from the University of Exeter.

‘As well as finding that the deep ocean is holding much of this excess heat, our research shows how ocean currents redistribute heat to different regions.

‘We found that this redistribution was a key driver of warming in the North Atlantic.’

For the study, researchers looked at a system of currents in the subtropical North Atlantic (25°N) known as the Atlantic Meridional Overturning Circulation (AMOC).

AMOC works like a conveyer belt, carrying warm water from the tropics north – where colder, dense water sinks into the deep ocean and spreads slowly south.

They used temperature records and chemical ‘tracers’ – compounds whose make-up can be used to discover past changes in the ocean, to measure levels of warming. 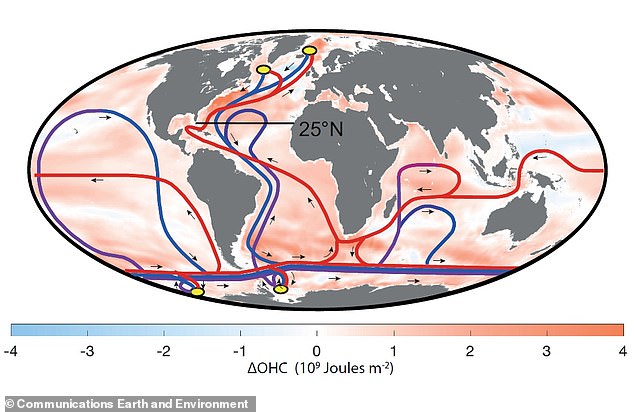 These findings show warming and its effects can be transferred from one region to another.

Dr Messias said excess heat from the Southern Hemisphere oceans is becoming important in the North Atlantic – now accounting for about a quarter of excess heat.

The findings were published in the journal Communications Earth and Environment.

The new research comes after a report by Monterey Bay Aquarium earlier this year revealed that more than half of the surface of the world’s oceans have experienced excessively warm temperatures since 2014.

The researchers, who analysed a century-and-a-half’s worth of global marine temperature data, warned that extreme marine heat is now the ‘new normal’.

They added that extreme marine temperatures can lead to the collapse of crucial marine ecosystems like coral reefs, kelp forest and seagrass meadows.

Parts of Antarctica have actually gained ice during the last 20 years, new research reveals, despite the continent suffering significant loss due to global warming.

Researchers say that sea ice, pushed against ice shelves by a change in regional wind patterns, may have helped to protect these ice shelves from losses.

Ice shelves are floating sections of ice attached to land-based ice sheets and they help guard against the uncontrolled release of inland ice into the ocean.

During the late 20th century, high levels of warming in the eastern Antarctic Peninsula led to the collapse of the Larsen A and B ice shelves in 1995 and 2002, respectively.

These events drove the acceleration of ice towards the ocean, ultimately accelerating the Antarctic Peninsula’s contribution to sea level rise.

There was then a period when some ice shelves in the eastern Antarctic grew in area, despite global warming.