Deep Purple’s long-time accountant has been banned from working for 11 years after admitting he ‘borrowed’ more than £2million of the band’s earnings without telling them.

Dipak Shanker Rao, 69, siphoned off huge sums from the legendary rock group’s accounts while he was managing their copyrights.

Rao, who worked for the band for 20 years, said he took at least £2.27million, while dealing with their financial companies, HEC Enterprises and Deep Purple (Overseas) Ltd.

Deeor Purple singer Ian Gillan, right, and bass guitarist Roger Glover, perform on stage together during a concert in Hungary, 2006

Both of the firms went into administration in early 2016 and so far just £477,000 has been recovered.

However, Deep Purple bandmates Ian Gillan, Ian Paice and Roger Glover claim he swindled them out of £4million and have launched a civil suit to reclaim the rest of their cash.

Rao’s ban from the workplace comes as the band perform what could be their final tour – The Long Goodbye – following the release of their 20th studio album inFinite.

Deep Purple formed in 1968 before achieving break-through success in the early 1970s, with hits including Smoke on the Water and Woman from Tokyo.

Rao’s scam came to light when the band’s former guitarist, Richie Blackmore, launched a lawsuit against the group’s management companies, demanding £750,000 in unpaid royalities, back in 2003.

An investigation by the Insolvency Service found Rao had made numerous payments from the company to his personal accounts between 2008 and 2014. 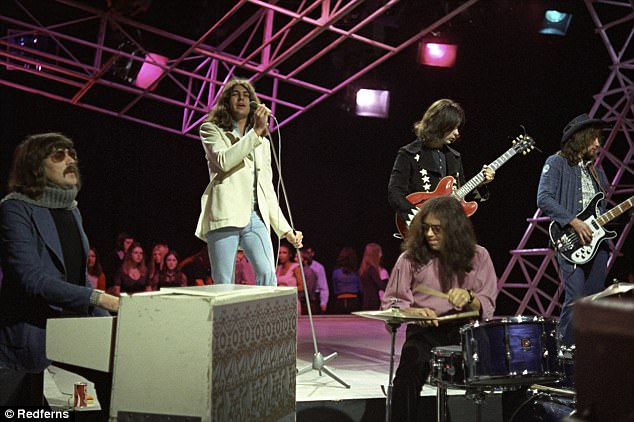 Left to right, Roger Glover and Ritchie Blackmore and Jon Lordand Ian Paice and Ian Gillan, perform on Top of the Pops during the 1970s

It said he concealed what he had done by ensuring the transactions did not appear in the financial accounts and by restricting access to the companies’ bank statements.

He has now been disqualified from managing or controlling a company without leave of the court until 2028.

Sue Macleod, chief investigator at The Insolvency Service, said: ‘Rao misappropriated company funds, causing detriment to the company and its creditors, to his own personal benefit.

‘Company directors should note from this enforcement result that actions of this kind will lead to serious censure.’