Deer roams through the streets of suburban Birmingham

Residents were left stunned after spotting a deer nonchalantly walking down the street in the middle of an inner city suburb of Birmingham.

The animal was spotted on South Street in the built-up area of Erdington close to the M6 motorway and Spaghetti Junction in the West Midlands.

Bizarre footage shows the deer sticking to the pavement as it roams around the residential road just off a busy high street, lined with shops and restaurants.

At one point in the 23 second video it is seen peering round at the cameraman, before continuing to make its way past a row of parked cars at around 10pm.

The video, which was uploaded to Instagram by ‘Birmz is Grime’, has been viewed more than 7,000 times after being shot last week.

It was posted with the caption reading: ‘I know Christmas is just around the corner, but why D’f*** is a deer casually strolling through the mean streets of Erdington.’

Claire Spencer, 46, an accountant who lives nearby, said: ‘I was shown the video by one of my colleagues during my lunch hour, and was completely baffled by it.

‘There are no animal sanctuaries or big parks round here, so where it came from is a bit of a mystery, really.

At one point in the 23 second video it is seen peering round at the cameraman, before continuing to make its way past a row of parked cars at around 10pm

‘Erdington is the absolute last place you’d expect to see a deer, to be honest. There’s loads of people around, and hardly any space for an animal like that roam around.

‘I wish I had seen it up close and personal, because it looks like a beautiful animal, it really does, and it’s rare that you get the chance to see them in the flesh.

‘The good thing is that I can tell my two young kids that it was a reindeer, scouting out the house in preparation for delivering their presents on Christmas Eve.’

Dave Cliff, 23, a warehouse worker, said: ‘One of my mates messaged our Whatsapp group to say that they’d seen a deer, but until I saw the clip on Instagram, I didn’t believe it.

‘This is probably the very last place that a deer would want to come, so I don’t know why it chose to roam around here. 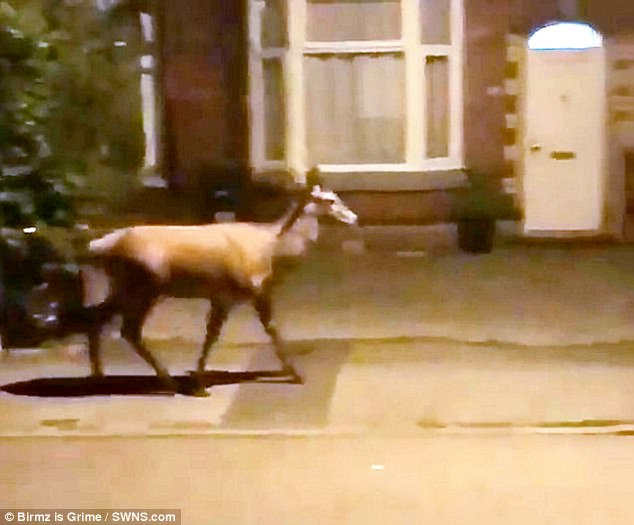 Bizarre footage shows the deer sticking to the pavement as it roams around the residential road just off a busy high street, lined with shops and restaurants

‘It was just off the high street and we’re only down the road from one of the busiest motorways in Europe. How it has found itself here, is beyond me.

‘I just hope that it got back to where it came from safe and sound because it definitely looks lost.’

Charles Smith-Jones, technical adviser to the British Deer Society, told MailOnline he thought it appeared to be a young red stag, no more than two years old.

He said: ‘This time of year the red deer are rutting – normally during the year, the males and females live apart in separate herds.

‘But as the rutt approaches they tend to congregate for a few short weeks. This time of year the stags will travel, sometimes long distance. I suspect that this one has just wandered into the wrong sort of area.’ 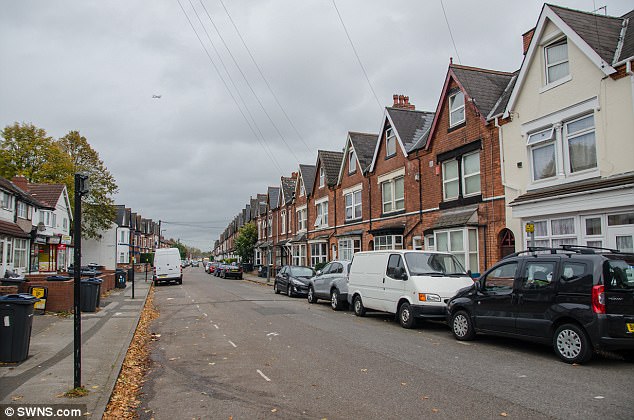 There have also been recent stag sightings around the Great Barr and Turnberry Park areas of the city, and experts say they are getting closer to humans in search of food.

Eva Phillips, on behalf of The Wildlife Trust for Birmingham and the Black Country, told the Birmingham Mail: ‘The countryside around Birmingham is alive with nature and the numbers of deer are increasing.

‘It’s amazing that these big animals can live so close to us but we are rarely lucky enough to see them. We think it’s likely that numbers are pushing them closer to humans in the search for food.

‘They are normally timid, passive animals outside the spring mating season but please don’t approach them as they may attack if they are cornered or feel threatened.’