While coalition talks are still underway, the Taoiseach admitted Wednesday that ‘at the end of the process, I will [likely] be leader of the opposition.’

Speaking outside Dublin Castle, he said Sinn Fein had earned the right to lead the next parliament after winning the most first-preference votes at last week’s ballot.

But he warned that they made ‘a lot of promises to a lot of people’ during the campaign, and now had to deliver.

The Republican party, shunned in the past over its links to the IRA, missed out on becoming Ireland’s largest party by just one seat once back-up preferences were taken into account.

Meanwhile Varadkar’s Fine Gael suffered its second-worst defeat in history under his leadership.

Summing up the result, he said: ‘As I see the situation Sinn Fein emerged as the largest party, at least in terms of votes in this election.

‘They won it marginally and they did so by making a lot of promises to a lot of people in this country.

‘The responsibility falls on them to build a coalition, to negotiate a socialist programme for government that keeps their promises and seek a Dail majority for it.

‘We are willing to step back and allow them do that.’

He said that Sinn Fein leader Mary Lou McDonald has not yet reached out to him following an historic victory for her party.

Mr Varadkar added: ‘We were defeated in this election, there is no point in trying to dress that up in anyway.

‘It was a tight finish, but we were defeated so that means people are saying to us that Fine Gael should go into opposition and we are absolutely willing to do that.’

He added that he would like to be allowed to lead his party in opposition, saying he wants to reform and modernise Fine Gael – a task he was too busy for in government. 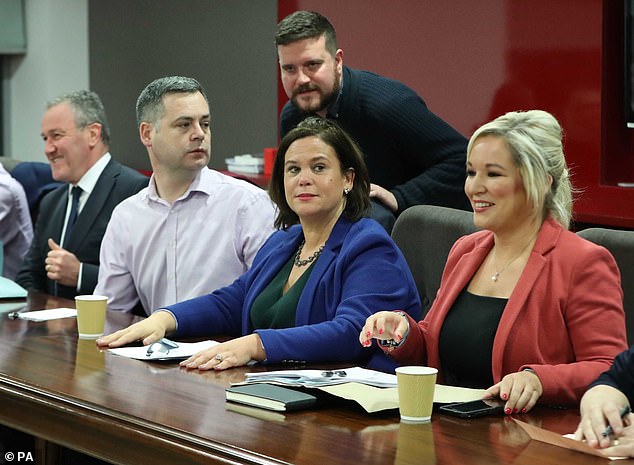 Varadkar said it should be up to Sinn Fein leader Mary Lou McDonald (centre) to try and form a government, but warned she had made ‘a lot of promises’ that now have to be delivered on

‘I relish the opportunity to do that,’ he said.

While all coalition talks are taking place behind closed doors, Ms McDonald said previously that her aim would be to form a left-wing coalition without Fine Gael or Fianna Fail – the party which pipped them to win the most seats.

Sinn Fein would need to secure the support of the Greens, Labour, the Social Democrats and Solidarity/People Before Profit, and a range of independent TDs, to form such an administration.

If that proves impossible, then government alongside Fianna Fail may prove the only workable alternative.

Asked of the prospect of a ‘super coalition’ of Fine Gael, Fianna Fail and potentially the Greens, Mr Varadkar said he hadn’t taken part in any such talks.

But he said he would be willing to talk with rival political leaders if there was a need to ‘give the country political stability’.

‘I have made it clear since before the election – and after – that I will speak to all parties in the interests of forming a government; starting with those with a mandate for change,’ she said.

‘The Green Party, having increased its mandate significantly, is undoubtedly one of those parties.’ 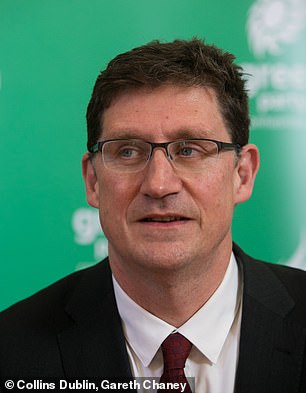 McDonald is trying to form a left-wing coalition of smaller parties, including the Greens (leader Eamon Ryan pictured)

If Ms McDonald does not reach 80 seats, she could theoretically form a minority government.

However, that would require an understanding with either Fianna Fail or Fine Gael, through some form of confidence and supply arrangement, that would see them abstain on key votes from the opposition benches.

‘It wouldn’t be sustainable for very long but I still think it’s worth exploring if we could do something to urgently address the housing crisis, some of the problems in the health service with the desperate waiting lists, some of the issues around climate change and the cost of living,’ he told RTE Radio One.

‘I think anything that could give expression and delivery to the sentiment that people expressed at the ballot box during the election would be worth exploring and I am absolutely keen to do it and People Before Profit are absolutely keen to try to do that.’

Many believe it will be impossible to form a government without the involvement of one of either Fianna Fail or Fine Gael, the two long-time big beasts of Irish politics.

A coalition of Fianna Fail, Sinn Fein and the Green Party – which ended with 12 seats – is seen as a potentially more realistic option. Though that would involved Fianna Fail leader Micheal Martin u-turning on his pledge never to do business with Sinn Fein.

Another permutation could see the exclusion of Sinn Fein, with Fine Gael and Fianna Fail entering power together with another smaller party or grouping – a so-called ‘super coalition’.

Fianna Fail could also potentially seek to form a minority government with several of the smaller parties – an administration that would require a confidence and supply deal with Fine Gael on the opposition benches.

That would reverse the landmark pact struck in 2016 that saw Fianna Fail, as the main opposition party, sustain the last Fine Gael-led minority government in power.

With so much uncertainty about the make-up of the next government, another general election cannot be ruled out. 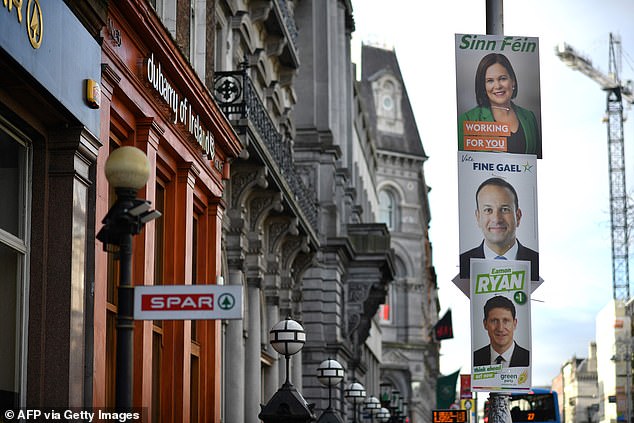 Varadkar said that he has not been approached about forming a ‘super coalition’ between his Fine Gael party and rivals Fianna Fail, but refused to rule it out if Sinn Fein cannot form a majority (election posters pictured in Dublin)

Fianna Fail emerged from Saturday’s election as the largest party by the narrowest margin over the surging Sinn Fein.

Mr Martin’s party finished with 38 seats to Sinn Fein’s 37 at the end of two days of counting.

But given the Fianna Fail speaker was re-elected without contest, both parties essentially ‘won’ the same number of seats.

Fine Gael was the big loser, winning only 35 seats having entered the campaign as the largest party on 47.

Despite being edged in seat numbers, Sinn Fein was undoubtedly the party with most to celebrate, having smashed Ireland’s long-standing two-party system.

Ms McDonald’s party triumphed in the popular vote and may have won many more seats – potentially an additional 11 – if it had fielded more candidates in the landmark contest.

As such, momentum is behind her in taking the first steps in what could be a long and tortuous process to form a new government.

She has predicted she could be Ireland’s next taoiseach.