President Donald Trump has pulled back on his shock announcement to withdraw all US troops from Syria.

The White House confirmed today that a ‘small peacekeeping force’ of 200 soldiers will remain in Syria ‘for now’, despite saying in December there would be a complete withdrawal from the war-torn country.

Trump’s reversal comes as reports that Islamic State fighters slipping across the border into Iraq are destabilising the country’s fragile security, according to US and Iraqi officials.

Hundreds of militants, who are facing imminent defeat in Syria, have defied a massive operation by US, Kurdish and allied forces and crossed the open, desert border in the past six months.

This comes as Syrian Democratic Forces surround the last IS holdout in Baghouz, a one square kilometre village on Syrian-Iraqi border beside the Euphrates River.

The US-backed militia said they expected to evacuate the last few civilians from the town before a final offensive to reclaim the village.

But fighting was temporarily stopped after Kurdish-led forces spotted large numbers of women and children still in the village.

Islamic State are believed to be increasing their use of civilians as human shields.

Across the border indications of the extremist group’s widening reach in Iraq are clear. 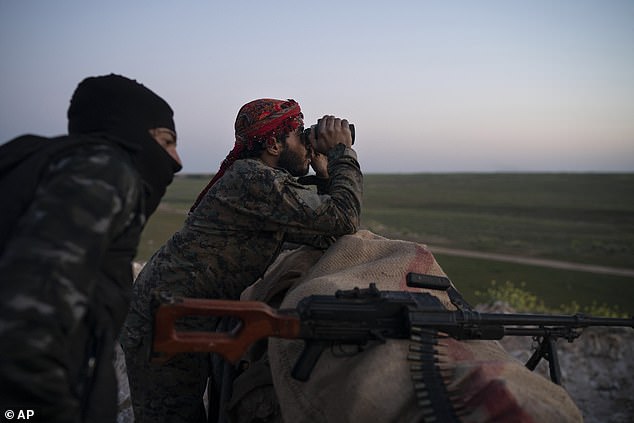 Cells operating in four northern provinces are carrying out kidnappings, assassinations and roadside ambushes aimed at intimidating locals and restoring the extortion activities that financed the group’s rise to power six years ago.

‘IS is trying to assert itself in Iraq, because of the pressure it is under in Syria,’ said Brigadier General Yahya Rasoul, the Iraqi army spokesman.

The militants can count between 5,000 and 7,000 among their ranks in Iraq, where they are hiding out in the rugged terrain of remote areas, according to an intelligence official.

The Iraqi army has deployed more than 20,000 troops to guard the frontier, but militants are slipping across, mostly to the north of the conflict zone, in tunnels or under the cover of night. Others are entering Iraq disguised as cattle herders. 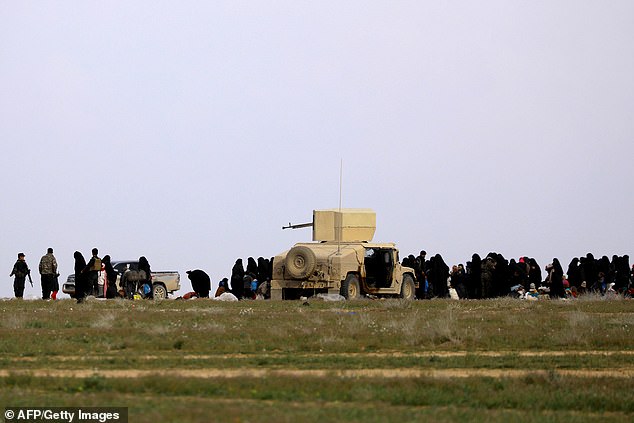 Women and children wait in a field with SDF fighter after fleeing the Islamic State. It is believed there are still hundreds of civilians still in the less than one kilometre sized holdout

They are bringing with them currency and light weapons, according to intelligence reports, and digging up money and arms from caches they stashed away when they controlled a vast swathe of northern Iraq.

‘If we deployed the greatest militaries in the world, they would not be able to control this territory,’ Brig Gen Rasoul said.

At its height in 2014 and 2015, the Islamic State group ruled over a self-proclaimed ‘caliphate’ that spanned a third of Iraqi and Syrian territory. The extremist group threatened to exterminate religious minorities. 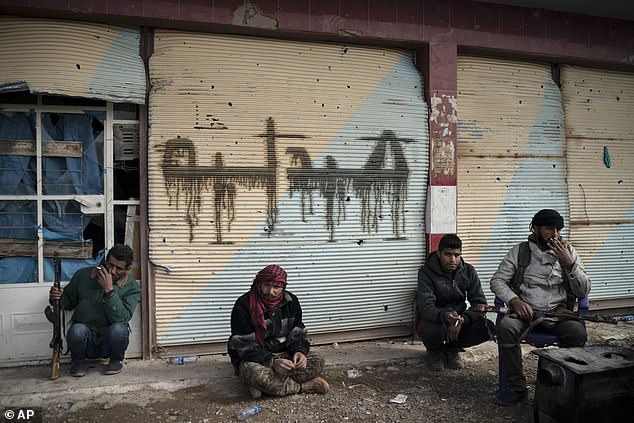 Syrian Democratic Forces fighters take a break in their fight against Islamic State militants. US officials and other allies believe possibly thousands of IS fighters have slipped over the desert border into Iraq

Iraqi forces, with US, Iranian and other international help, were able to turn the war around and Baghdad declared victory over the group in December 2017, after the last urban battle had been won.

But precursors to IS have recovered from major setbacks in the past, and many fear the militants could stage a comeback. The group is already waging a low-level insurgency in rural areas.

The Associated Press verified nine IS attacks in Iraq in January alone, based on information gathered from intelligence officials, provincial leaders and social media. IS often boasts of its activities through group messaging apps such as Telegram. 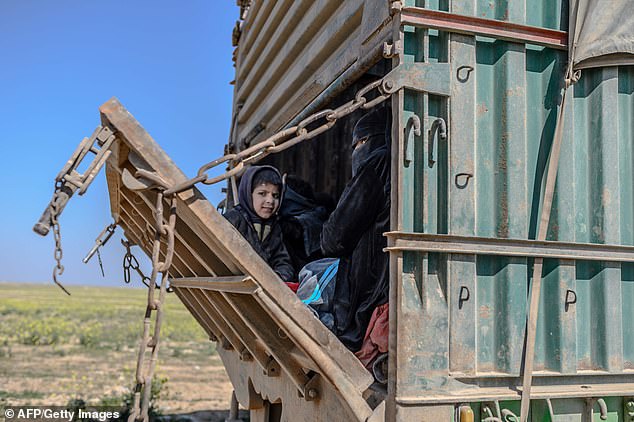 In one instance, a band of militants broke into the home of a man they accused of being an informant for the army. They shot him and his two brothers.

Sheikh Mohamed Nouri, a local tribal leader, said it was meant to intimidate locals in order to keep them from sharing intelligence with security officials.

‘I have members of our tribal militia receiving threatening messages warning them to abandon their work,’ said Mr Nouri.

The militants staged a dramatic resurgence after 2011, when US forces withdrew from Iraq and civil war broke out in neighbouring Syria. Today some 5,200 American forces are based in Iraq, after they were invited back to help stem the IS rampage in 2014.