Michael Fallon effectively admitted to ‘creative accounting’ yesterday in a bid to comfortably hit the Nato target of two per cent.

The Defence Secretary yesterday said the remit of the defence budget would be ‘marginally’ wider to include elements of intelligence.

By stretching the definition of defence to include money from other departments, the Tory party will stay easily above the target set by Nato.

Defence spending now includes all of a £1billion pot designated for peacekeeping missions and part of a new £1.5billion joint intelligence and defence fund.

Last night MPs claimed the Government was ‘shrouding defence spending with smoke and mirrors’ and called for the spending total to be calculated the same way as it had in the past.

After months of pressure from military chiefs and backbench Tory MPs, George Osborne announced the two per cent target would be met in the budget last week.

But yesterday Mr Fallon was forced to deny repeated accusations of ‘cooking the books’ during defence questions in the Commons.

Asked if the remit of the Ministry of Defence budget would be wider in the future, Mr Fallon responded: ‘Very marginally’.

Addressing MPs, Mr Fallon dismissed suggestions the target would be met by ‘raiding other accounts’ and said ‘no books are going to be cooked’.

Mr Fallon failed to answer how much money of the intelligence budget would be classified as defence spending, adding that Nato set the guidelines.

Yesterday Tory MP Julian Lewis, chairman of the Defence Select Committee, said the Nato figure should not be manipulated in this way.

He told the Mail: ‘My concern throughout this process is that creative accounting should be avoided and that we should calculate the percentage of GDP spent on defence in the same way in the future as it has been in the past.’

He said: ‘It is becoming clear that the Government have only crossed the line by including the Single Intelligence Account as Defence spending, and that Ministers haven’t made the MoD a land of milk and honey overnight.’

He said: ‘Spending on intelligence agencies such as MI5 and 6 have not and must not come out of the defence budget which is needed for our Armed Services and their families on essential equipment, training and adequate armed forces housing.’

Recent figures released by Nato revealed that Britain is in line to spend 2.1 per cent of national income on defence this year.

But this also includes all of the £1billion cross-departmental fund known as the Conflict Pool, which is used to support fragile and wartorn states rather than military operations. 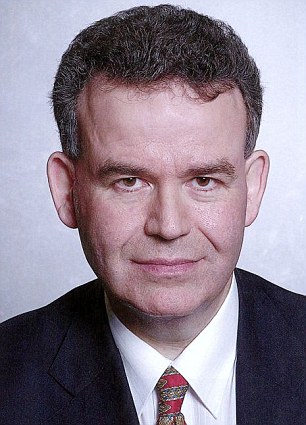 Tory MP Julian Lewis, chairman of the Defence Select Committee, said the Nato figure should not be manipulated in this way

If £1billion was taken off the £39billion figure then Britain would only be spending marginally over 2 per cent of national income on defence.

The fund is used for peacekeeping missions and one of the projects paid for by the fund includes the deployment of gender advisers to help the Kurds.

It will also include money from a new £1.5billion joint intelligence and defence fund.

Speaking to the BBC Radio 4 Today programme yesterday, Mr Fallon insisted the Government was not trying to meet the two per cent defence spending target by including intelligence or aid spending.

He said: ‘The Nato table of how much each country spends is drawn up by Nato guidelines, so it is up to Nato to rule what is included and what is not included.

He added: ‘There is a new fund being set up on intelligence and defence which we will bid into.

‘Where there is defence work associated with that, where we spend money, then that will fall to our budget.’

Asked whether that meant the remit of the MoD budget would be wider, Mr Fallon replied: ‘Very marginally. But it is for Nato to decide what is legitimately included or not…

‘We will see exactly what intelligence activities we are involved in that might be included.

‘But that is not going to affect the two per cent. We meet the 2 per cent anyway and we meet it easily.’

During defence questions in the Commons, MP Douglas Carswell asked if the Nato target would be achieved without ‘cooking the books’.

Mr Fallon responded: ‘I’ve already made it very clear that no books are going to be cooked.

‘Anything that is included has to meet the Nato guidelines and where there is expenditure on defence intelligence, which comes out of the defence budget, that’s right they should be included in our defence totals.’