The EU’s desire for a European army that would rival Nato is an ‘absolutely crazy idea’ that would undermine peace and security, the Defence Secretary has warned.

He also criticised both countries for not spending 2 per cent of their gross domestic product on defence, a Nato guideline.

The EU’s desire for a European army that would rival Nato is an ‘absolutely crazy idea’ that would undermine peace and security, the Defence Secretary, Gavin Williamson has warned.

‘It is an absolutely crazy idea. Nato has delivered European security for the last 70 years and we should feel very proud of it. Should we undermine that by forming a separate military force? Absolutely not. To begin discussing a new EU army is dangerous and undermines the security that Nato underwrites.’

He added: ‘Before Europe starts seriously planning its own army it should adequately fund the military that has protected its borders from aggression for 70 years. Two per cent of GDP should not be beyond the wit of those who have accumulated great wealth through the protection of Nato, primarily under the leadership of the US and UK.’

US President Donald Trump has repeatedly called for European allies to spend more. 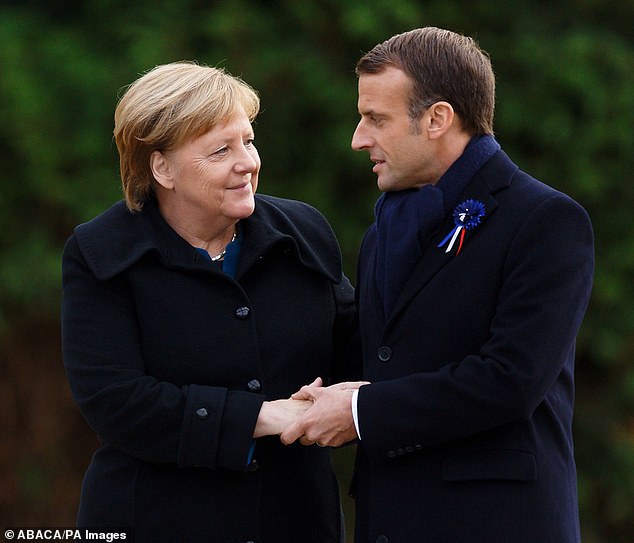 Mr Williamson said: ‘The reality of a European army is one that will be a magnificent political idea for our continental friends but will merely exist on paper.

‘Britain does not support the idea of a European army. We have always been consistent – we must not undermine sovereignty over military forces. I believe it is a folly to create new institutions that compete with Nato.’

Mrs Merkel last week told the European Parliament in Strasbourg: ‘The times when we could rely on others are past.

‘This means that we as Europeans now have to really take our fate fully into our own hands if we want to defend our community.… We have to work on a vision of one day creating a real, true European army.’

Earlier, Mr Macron angered Mr Trump by suggesting a European army was needed to protect France from aggression from America, China and Russia.

The French president said: ‘We won’t protect Europe if we don’t decide to have a true European army. We have to have a Europe that can defend itself alone and without only relying on the US. We should protect ourselves when it comes to China, Russia and even the US.’

In response, Mr Trump said in a tweet before a meeting between the pair: ‘Very insulting. Perhaps Europe should first pay its fair share of Nato, which the US subsidises greatly!’

He also tweeted: ‘Emmanuel Macron suggests building its own army to protect Europe against the US, China and Russia. But it was Germany in World Wars One & Two – How did that work out for France? They were starting to learn German in Paris before the US came along. Pay for Nato or not!’

How did the European army row erupt?

On November 6,  French President Emanuel Macron  called for the creation of a European army to protect the continent from growing military threats – including the United States

He said China and Russia were becoming increasingly powerful, and that the U.S. under President Donald Trump could not be relied upon for defence

The 40-year-old said some of the actions taken by the U.S. President would have consequences for security in Europe.

In response to Mr Macron’s suggestion that the EU should have its own army, Mr Trump tweeted on November 9: ‘President Macron of France has just suggested that Europe build its own military in order to protect itself from the US, China and Russia. Very insulting, but perhaps Europe should first pay its fair share of Nato, which the US subsidizes greatly!’

Following Mr Macron’s comments, on November 13, Angela Merkel called for the creation of a ‘real, true’ European army during a speech to EU ministers in a rebuke to President Trump.

The German Chancellor also called for a European Security Council that would be responsible for coordinating defence policy across the continent.